How The Fastest Spacecraft Ever Will Get Into Orbit Around Jupiter

Juno will zoom in on Jupiter on July 4th 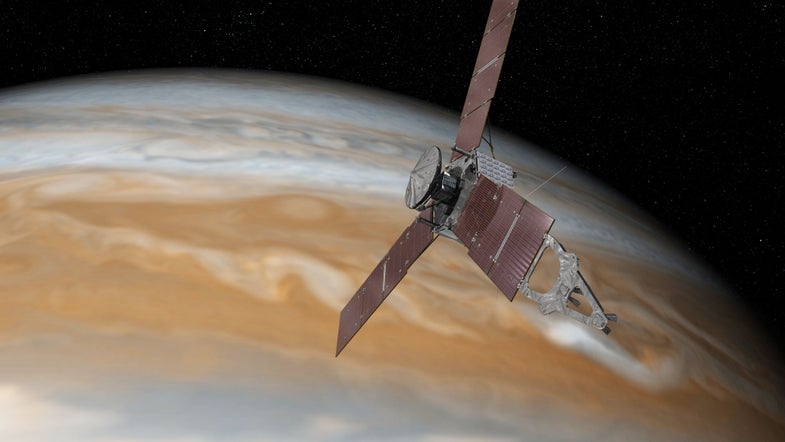 After a 1.74 billion mile journey, NASA’s Juno spacecraft is due to arrive at Jupiter on the fourth of July. It will be the fastest spacecraft ever when it arrives, traveling at 165,000 miles an hour, which makes getting into orbit around Jupiter trickier than usual.

One of the brightest beacons in the night sky, Jupiter is always drawing our attention. It also has this attraction in space, with the largest gravitational influence in the solar system, aside from our Sun. The famed gas giant might even be responsible for flinging out a possible ninth planet during the early days of the solar system.

With its signature “red spot” and colorful bands, images of Jupiter are easy to identify, but there’s a lot going on there that we still don’t know about. Scientists still have no idea whether Jupiter has a solid core like Earth’s, or what’s hiding beneath its thick and stormy atmosphere. Juno is on a mission to peer through the clouds and discover some of the mysteries lying below this tumultuous façade.

Manmade spacecraft have visited Jupiter a total of eight times before, but this will be only the second time a spacecraft has stayed to orbit the planet. Juno will come about 10 times closer than the previous orbiter.

When asked what was harder, entering orbit around an object or landing on one, Art Chmielewski, US project manager for the Rosetta mission, which orbited and landed on a comet, said: “One is bizarrely difficult and the other is incredibly difficult.”

Making things more difficult, Jupiter’s massive magnetic field ends up trapping charged particles and accelerates them to really high speeds. These zippy particles are the biggest risk as Juno enters into Jupiter’s orbit, because they could destroy its delicate electronic circuitry. The engineers who designed Juno are prepared for high doses of radiation, but because no spacecraft has ever been this close to Jupiter, there is no way to know what might happen.

Gearing Up For Arrival

Scientists and engineers at NASA’s Jet Propulsion Lab are in the midst of preparing the spacecraft for this treacherous event. To protect Juno’s electronics from the harsh radiation, all nine of its science instruments will be shut off during orbital entry, and only the engine valve will be opened and ready to fire. The science instruments will turn off on June 29.

The next big event won’t happen until July 4th at 6:18pm, when Juno begins transmitting tones. Because of the distance to Jupiter, the team opted for a very simple communication system, not unlike the emergency broadcast tones that come up occasionally on the radio. They’ve designed several different tones that represent something that the spacecraft has completed. So instead of “this is a test of your emergency broadcast system”, it’ll be more like, “we are a go for orbit insertion,” and then ultimately, “I’m safe and have survived orbit insertion.”

There are two other important times to watch out for on July 4th.

The first is at 8:18pm Pacific time, when the main engine burn begins. Juno is going so fast it could actually pass Jupiter, so the spacecraft will have to slow down a bit to get captured. In order do to this, the spacecraft will turn a few degrees and fire it’s engine for 35 minutes in an extreme breaking maneuver. 8:18 is when Juno starts to slam on the brakes.

Then, at around 8:38pm Pacific, JPL should get word that the spacecraft successfully entered orbit, and Juno’s science mission can begin.

What Will We See?

JUNO will fly closer to Jupiter than any spacecraft in history, getting as close as 3,000 miles above the clouds. Some of the most amazing, hi-res images of Jupiter will come from this mission, but not until the end of August. The Juno team will release a few lower-resolution images on July 5, but these lo-res pictures will show Jupiter looking teeny, only taking up 15 pixels, because the trajectory required to capture Juno into a stable orbit starts very far away. In the meantime, the team will be getting telemetry data back from Juno on the health of the spacecraft as it gets closer and closer to Jupiter’s blasting belts of radiation.

Keep an eye out for Jupiter-related news, as the data from this epic science mission is sure to be amazing.

Popular Science will be at NASA’s Jet Propulsion Laboratory in Pasadena, California for this monumental event. Keep up with our coverage here. You can also watch live on NASA TV or JPL’s Ustream channel. Around 8:38pm Pacific time, you should hear those classic cheers from JPL’s mission control after they’ve received word of successful Jupiter orbit insertion, or as JPL is calling it, JOI.