A close look at severe weather 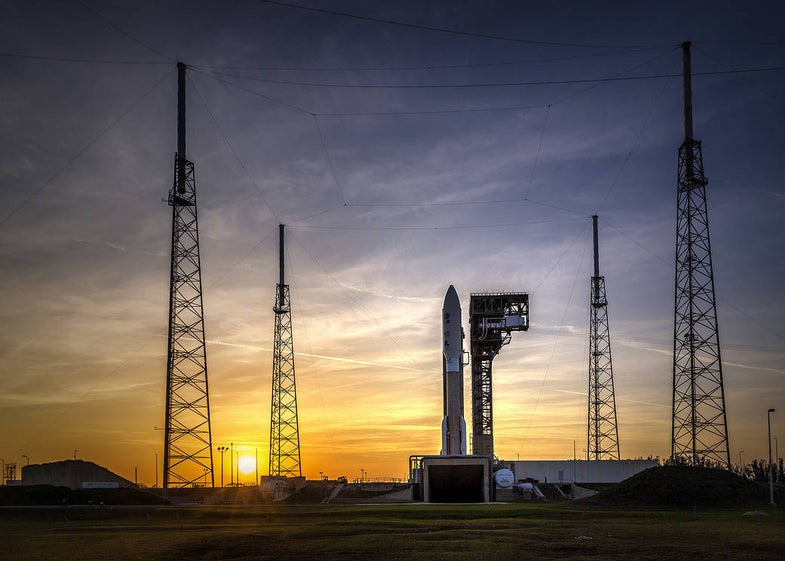 22,300 miles away from Earth, right around the Equator, a satellite watches storms swirl, wildfires burn, and clouds race across the sky. It keeps constant, vigilant watch over the Western Hemisphere, from the west coast of Africa across the United States.

This is GOES-16—a NASA/NOAA project that’s given us some of the most detailed views of this part of the world to date, and it’s about to get a companion.

At 5:02 p.m. eastern time on March 1, NASA is scheduled to launch the GOES-S satellite, which has the capability to monitor the weather of the United States in incredible detail. Launch coverage starts at 4:30 p.m., and you can watch here:

While GOES-16 focuses on the eastern part of the Western Hemisphere, GOES-S (which becomes GOES-17 once it gets into geostationary orbit) will focus on the west. The pair will constantly snap pictures to give weather forecasters back on Earth a full, updated view of the Western Hemisphere every 15 minutes, and the continental United States every 5 minutes. The satellites can also focus in on concerning storms and wildfires, giving people in those areas updated information every 30 seconds or so.

Both satellites can capture all this detail thanks to the Advanced Baseline Imager (ABI), which looks at 16 different wavelengths of light to get a complete picture of what’s happening on the ground at a resolution of 0.3 to 1.3 miles (0.5 to 2.0 km).

The 16 bands measure a whole host of factors that are interesting to climatologists and meteorologists, from cloud cover and water vapor in different levels of the atmosphere to ozone, aerosols, ash, and even vegetation.

“The primary mission of these satellites is severe weather, and what they call nowcasting; tornadoes, hurricanes, and now things like fire detection that the weather and forecasting communities are able to do because of the capabilities of this instrument,” says Eric Webster, General Manager at Harris Environmental Solutions, which built the ABI.

“Fires is one example where they’re using additional bands to weed out false alarms and improve the fire detection algorithms,” says Paul Griffin, Chief Engineer of the ABI instrument. “The resolution is also four times finer than the previous generation, so you can see phenomena that you weren’t able to see before, subtleties of how weather develops, which lets you do better predictions—and you can detect smaller fires at an earlier stage.”

GOES-16 has already shown that it can detect smaller fires more accurately than the previous generation of satellites, spotting even small, short-lived agricultural blazes in Florida that didn’t show up in the older generation’s imagery.

“But the greatest thing that I’m finding is the temporal resolution,” Griffin says. He’s been attending conferences and listening to feedback from the National Weather Service. The people whose job it is to monitor storms and wildfires tell Griffin that the ability to focus in on any 1,000 km by 1,000 km square within the satellite’s field of view and get updates on that spot every minute is incredibly useful. It can help forecasters generate more accurate predictions for storm tracks, or tell firefighters where a wildfire is likely to move, allowing them to get to safety.

With the new satellite in the air, the National Weather Service will be able to use that granular viewing option on up to four different locations at the same time “Say there’s a hurricane off of Florida and a tornado outbreak in Virginia—they can still pay attention to wildfires in California or Oklahoma at that same mesoscale resolution,” Webster says. “With just one ABI in orbit, they have to pick and choose. But now they’ll get the benefit of being able to do it over the entire United States and into the oceans.”

GOES-16 and GOES-17 will cover quite a large area, from Africa to New Zealand. But they aren’t the only satellites with this ABI technology. The tech is already in use onboard two of Japan’s Himawari satellites, and will be launched on a South Korean satellite later this year.

“Once that goes operational, three quarters of the world will have the benefit of this amazing imager,” Griffin says. He’s excited about the possibilities, not just for the populations living in those areas but for the scientists and engineers that will be working with the data as it comes streaming back to Earth.

The quarter of the world not imaged by these instruments is a swath over Europe and Eastern Africa, which has its own high-definition satellites planned for launch in 2022. What will happen with all those satellites up there? We’ll get a pretty great view of Earth, and a more detailed picture of whatever doom our planet has on the menu for us today. But beyond that, we just don’t know yet.

“As the instrument continues to work, researchers are going to continue to find things that no one has thought of before,” Webster says. “We saw that with our older generation of technology, within just a few years people thought of new things it could do, just using the data it was bringing back or combining it with other data sets in new ways to produce new benefits from society, whether it was [researching] climate change, improved ash forecasts, or helping solar companies. We’re in the honeymoon phase, and it’s only going to get better in the future.”