A recap of Manhattanhenge 2016 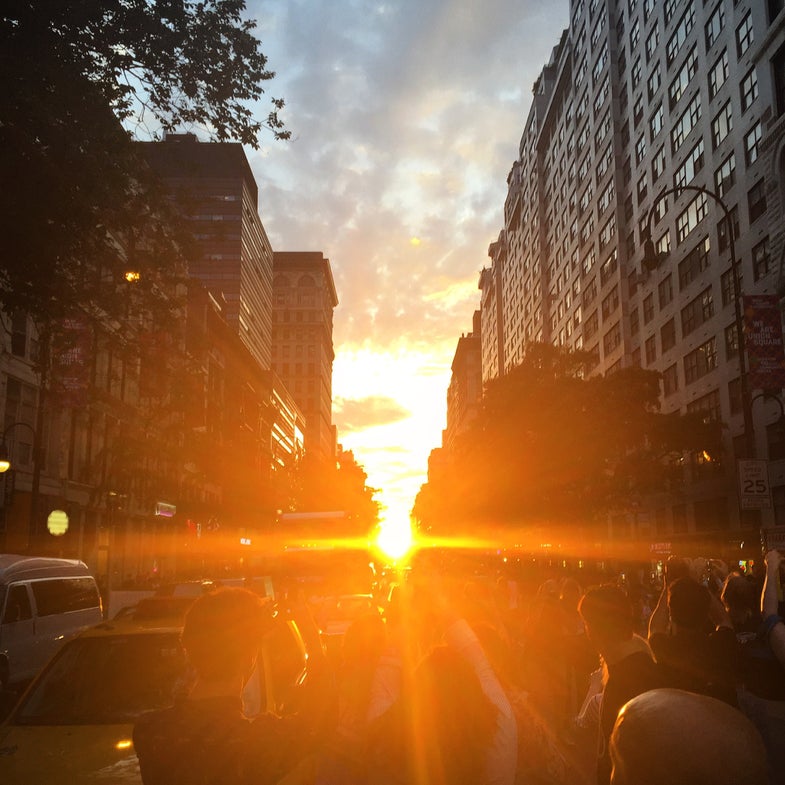 On the evening of July 12th, crowds flooded the streets to watch 2016's July "Manhattanhenge," a bi-annual event in which the sun aligns perfectly with the grid of Manhattan's buildings. The event, popularized by astrophysicist Neil DeGrasse Tyson, draws massive crowds into busy streets all over the city. Manhattanhenge is considered a good way to get people interested in astronomy, though it may also be a good way to get run over. Ryan F. Mandelbaum
SHARE

On the evening of July 11th, the scene on Manhattan’s 14th street was nearly riotous. Every minute or so, the traffic light changed and a crowd flooded the street, facing west with their iPhones above their head. The light changed again, the crowd dispersed, and a symphony of car horns tried to beckon any stragglers back onto the sidewalk. By 8:20 pm the honks were futile.

A confused businessman was describing what he saw into his phone. “What’s going on?” he asked me when he noticed I was giggling at his confusion. I explained that it was Manhattanhenge, and for the next to last time this year, the sunset was perfectly aligned with the grid of Manhattan. He backed away babbling in gibberish.

“Manhattanhenge” was popularized by the American Museum of Natural History’s Neil deGrasse Tyson and happens twice a year, a few weeks before and after the summer solstice. The number of Google searches for “Manhattanhenge” has increased exponentially in the past few years, says Jackie Faherty, research scientist who works on science outreach at AMNH, and the number of people flooding the streets of Manhattan during the event each year continues to increase. It creates a bit of a traffic and safety problem.

“You’ll notice that it’s becoming dangerous for everybody because you need to be in the street. I’d love to see more street closures on the days of Manhattanhenge,” Faherty told Popular Science.

Faherty lectured a group of several hundred people at the Hayden Planetarium at AMNH last night to explain the science and history of Manhattanhenge. The event occurs because of how the orientation of Manhattan’s grid aligns with the location of the Sun. The Earth spins on a tilt, so as it orbits the Sun and the year progresses, different parts are exposed to different amounts of sunlight. North of the equator, the longest days are in the summer, when the Sun is high in the sky and rises and sets north of east and west. As winter approaches, the Sun appears to move south and lower in the sky, until the winter solstice when its arc is shortest. Afterwards, the days grow longer as the Sun moves north, and the cycle continues.

The sunset lines up with the grid of Manhattan twice a year, on May 29th and 30th as the Sun moves toward the summer solstice and on July 11th and 12th as it returns southward. Between these days, the Sun will line up with the grid during the day, but higher in the sky. Other cities have “henges” on different days, so long as they have a grid pattern that that faces between the sunset’s southwestern and northwestern-most points. The term comes from Stonehenge in England, built so that the slabs align with the sunrise during the summer solstice and sunset during the winter solstice.

After the event, we went outside to 79th Street, closed to traffic by the community board of Manhattan’s Upper West Side and a far different scene from the first night of Manhattanhenge. A crowd of people stood, sat, and chatted in the center of a normally busy New York street watching the Sun cross diagonally from upper left to lower right and ultimately behind a building on the horizon across the Hudson River in New Jersey.

Faherty told me that initially she would go to her “secret spot,” Pershing Square, an overpass near Grand Central station. But recently, “it was flooded with hundreds of people.” She noted that the 79th Street spot has been closed to cars annually during the event since 2012, but the view wasn’t optimal. Many in the crowd groaned as a tall building across the river blocked the climax.

There are other Manhattanhenge-like events, though. Early risers can catch a grid-aligned sunrise over equally apartment-building-heavy Queens on days surrounding the winter solstice, and on some days the full moon rises along the grid, though predicting those dates is more difficult, said Faherty.

Manhattanhenge has two purposes: to get laypeople excited about astronomy and as a good photo op for Instagrammers or Pokemon Go players, so the best place to watch is a scenic street. “It’s an epic photograph with your favorite building,” Faherty told the crowd last night.