Watch Along With Us As The Juno Spacecraft Arrives At Jupiter 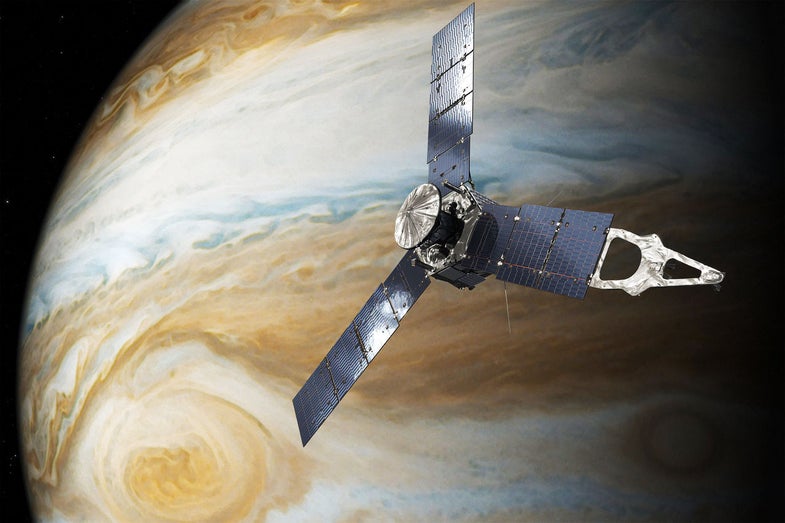 Update 6/5/2016 12:45am: NASA has confirmed that Juno has turned its solar panels back toward the sun, is receiving power, and has started a 53 day orbit that should give us closeups of Jupiter in late August.

Update 11:55pm: Welcome to Jupiter! Juno’s engine burn was successful, and the spacecraft is now officially in orbit. Now Juno will spin down and turn around to point its solar panels at the sun. The team is hoping to get a photo back tomorrow.

Update 11:18pm: JPL has received confirmation that Juno has fired up its main engine to slow down for entry into Jupiter’s orbit. The burn will last for 35 minutes.

Update 10:55pm: The spacecraft has spun up from 2 revolutions per minute to 5 rpm. Just like a bike tire is more stable as it spins faster, the faster rotation rate will give Juno more stability as it enters orbit around Jupiter. Next, at around 11:18pm, mission control should get the signal that Juno’s main engine fired up for the braking maneuver that will help Jupiter’s gravity capture Juno. (Because it takes 48 minutes for the signal to travel from Jupiter to Earth, each action was actually performed by the spacecraft 48 minutes before JPL receives the confirmation signal.)

The biggest, stormiest, most extreme planet in the solar system is about to get a new neighbor. The Juno spacecraft will arrive in Jupiter’s orbit on July 4, and you can watch along with NASA and Popular Science. After you’re burnt out from your boozy Independence Day activities, tune in to the livestream above to watch history in the making.

The folks at NASA’s Jet Propulsion Lab are expecting to get confirmation that Juno has entered orbit at 11:53pm ET on Monday, but the livestream starts at 10:30pm.

Juno launched from Earth back in 2011, and has traveled 1.7 billion miles to reach Jupiter. Along the way it has broken several records, becoming the fastest spacecraft ever, as well as the spacecraft that has traveled the farthest from the sun using solar power. So many superlatives.

There won’t be a ton of stuff to see on the night of the arrival, but you will get to witness (we hope) an eruption of cheers from the team at JPL. The spacecraft will send back a few low-res images on July 5, with higher quality images coming back in August, after the spacecraft has had time to move in closer to the gas giant.

Popular Science will be there at JPL on Monday, shooting video and bringing you behind-the-scenes stories about the event. Follow our coverage here.