To hit a 1.6-inch target after an all-out cardiovascular sprint, take a deep breath. 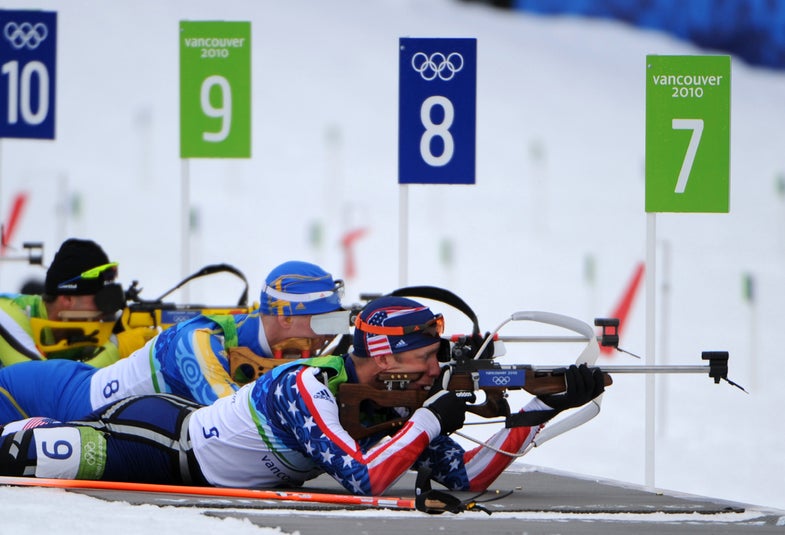 Back in 1767, Norwegian border patrol troops had far too much time on their hands. So they decided to put their two best skills —firing a gun and cross country skiing—to good use. The bored border patrollers created a competition out of it to see who could shoot the straightest and ski the hardest. They called the sport “military patrol,” because, well, they were Norwegian border patrol men. Today, we call it “biathlon.”

“Military patrol” made its debut as a demonstration at the 1924 Winter Olympics, but it wasn’t until it gained popularity as a sport that it became “biathlon,” and in 1960 it became an official Winter Olympic sport under that name.

To compete, athletes have to be able to cross-country ski for up to 20 kilometers (12.4 miles) for men and 15 kilometers (9.3 miles) for women, which is divided up across several segments interspersed with shooting ranges. The ranges have five targets, and you have one (literal) shot at each. You race for time, and you’re penalized for missing a target either by directly adding time to your final score or by making you ski an extra loop on the track. There are five different types of biathlon races, each with slightly different rules, but they’re all unified by one thing: You have to ski as fast as you possibly can and then shoot tiny targets from 160 feet away.

Cross-country skiing is challenging. During the race, a skier’s heart pumps, or beats, at roughly 90 percent of its maximum allowable rate. It’s an all out sprint like any other Olympic race, but when you’re done, you have to switch gears and fire a steady shot. When your blood moves that fast through your veins, you actually see the effects. “You’re watching the target come in and out of your sight,” says Sara Studebaker-Hall, a two-time Olympic biathlon competitor for the U.S. “The example we give to people is it’s like running up a flight of stairs as fast as you can and then trying to thread a needle.”

But it’s actually one step further than that, because any normal person would take a moment of two to catch their breath before they hold a super sharp object. Biathlon competitors don’t get that luxury.

“The best athletes in the world are in the shooting belt for 20 to 25 seconds,” Studebaker-Hall explains, “so you spend a lot of time training to shoot at a fairly high heart rate.”

In fact, Studebaker-Hall doesn’t want her heart rate to drop too much. If your heart is going fast enough, she explains, it’s pumping so quickly that you don’t really notice, and equally when it’s going slowly you aren’t conscious of it beating, she explains. But when you’re just above normal, you’re hyper-aware of every beat. That pounding can be felt in your grip on the rifle. “You don’t want to dip down into that region,” she says. “That’s one of the reasons you end up shooting so fast.”

Which is not to say that heart rates don’t drop at all. The few studies done on changes in heart rates during biathlons suggest that athletes drop their rates to about 60 to 70 percent of their max, versus 90 percent during the race. Most normal exercise happens in the 70-85 percent range, for reference. Their heart rates drop less when shooting upright as opposed to lying on their stomachs, but that’s still a significant drop considering it happens in less than a minute. They’re actively slowing down their own pulse through breathing and concentration, not just letting their heart slow on its own.

You also can’t keep your heart rate up too high, because shooting is as much a mental game as it is a physical one. If your heart is going all-out, you may not notice the beats but you’ll have a hard time focusing enough to get the shot right. So how do you hit a 1.6-inch-wide circular target from 160 feet away as you’re breathing heavily? “You breath out to the natural bottom of your breath,” says Studebaker-Hall. “It’s a natural pause point, and that’s where you take the shot.”

Though she’s focused on her breath, she also happens to be using a technique that seems to be unconsciously used by other marksmen. “Elite rifle shooters are more precise when the timing of triggering happens in the beginning or the end of the R-R interval,” explains Harri Luchsinger, a researcher who studies the science of human movement at the Norwegian University of Science and Technology, and is one of the few scientists to examine the sport of biathlon from a scientific perspective. The “R-R interval” is scientific jargon for the period between the peaks of your heart beat. You can hear the peak in your own heartbeat—it’s right about when the thumping noise happens. That’s your heart contracting and squeezing blood out into your arteries, and it’s also when the electrical peak in your heartbeat occurs. In other words, shooters are more precise when they take the shot in between beats. “I don’t think that athletes actively think about shooting in this part of the heart beat,” Luchsinger says, “but this adaption merely comes naturally from tens of thousands of repetitions.”

Shooting at the bottom of each breath should help to time the shot to a break in your heart beats because, as Luchsinger explains, your heart rate changes a bit with every breath. As you inhale, it beats a bit faster and it slows down on the exhale.

Studebaker-Hall says she isn’t thinking about any of that, just as Luchsinger suspected. In fact, she says everyone always asks her how she slows her heart rate down to shoot, but that “it’s a little bit of a confusing question, because from the athlete side that’s not what we think about. I think about my breath.” She says she just knows what it feels like to be in her sweet spot—her excellence is subconscious.

It might seem like a crazy sport to the rest of us—who aims to become an expert skier and an expert marksman? But then again, excelling at two totally disparate skills can be thrilling. “Biathlon is so amazing when it goes right,” Studebaker-Hall says. She recalls one race, in particular, during the Games in Sochi: She was skiing her leg of the relay race and came into the shooting range and just felt it. “I shot really well. I hit all my targets and that moved us up a few places,” she says. “The trick is to not let yourself freak out. As soon as you let yourself be aware of the crowd and realize that ‘oh my god I’m at the Olympics’—that’s when it’s all over.”