More Evidence That Early Earth Collided Head-On With Another Planet 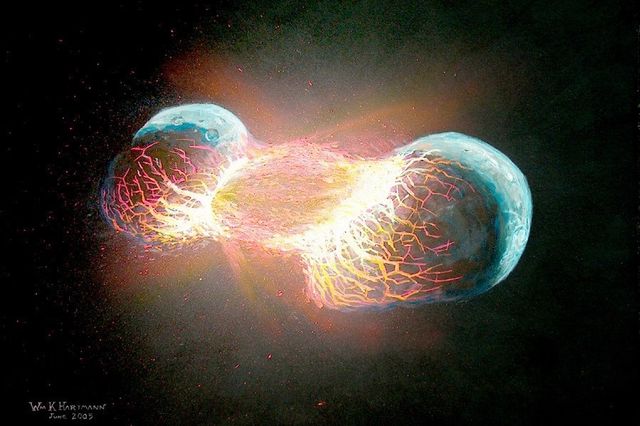 Soon after the Earth coalesced in the early solar system, it was hit by another planet, Theia. The collision formed the moon, but researchers are still trying to piece together exactly what happened, including what happened to Theia. For years, researchers have thought that Theia might have smashed into Earth at an angle, strong enough to obliterate Theia into little bits and create the moon. But that might not be the case. Instead, a recent study suggests that Earth might actually be a chimera of the two planets.

A new paper suggests that instead of a simple sideswipe that crushed Theia into smaller pieces that formed the moon, the impact was more of a head-on collision that was so forceful that it thoroughly mixed Theia and the Earth together, giving both Earth and the newly formed moon a unified geological signature.

The ‘giant impact hypothesis’ has been floating around since the 1970’s, but researchers are still arguing over the exact nature of the collision. Unfortunately, there are no instant replay cameras that date back to that moment in time, so researchers have to content themselves with the next best thing: rocks.

By analyzing rocks from both the Earth and the moon, the researchers found that there was essentially no difference between their oxygen isotopes, indicating the possibility that Theia and the Earth mixed together. The finding directly contradicts results from another paper in 2014 which found evidence that the moon had a distinct isotopic signature, supporting the sideswiping hypothesis.

“We don’t see any difference between the Earth’s and the moon’s oxygen isotopes; they’re indistinguishable,” Edward Young, lead author of the new study said

Why care about the difference between oxygen isotopes on the Earth and the moon? Scientists have long been puzzled by the idea that the Earth and the Moon had very similar geological signatures. The 2014 finding provided researchers with an explanation that fit into the computer models of an oblique collision. If Theia impacted the early Earth at an angle, scientists would expect the Moon to be more like Theia, and the Earth… more like Earth.

A study last year found that it was possible for Theia to be almost a twin to Earth which makes the weird similarity between the geology of the Earth and moon fit with the sideswipe theory. But this new theory is simpler, suggesting that instead of bouncing off each other like pool balls, Theia and Earth got mixed together like cake batter, spinning off the moon (made of the same mixture) in the process.

Researchers will continue to try to reconstruct the planetary collision in the future, and there will probably be a lot more conversation and controversy within the planetary geology community before a consensus is reached.

In the meantime, it’s pretty amazing that Earth withstood an impact that completely totaled another planet, and got a moon in the process. Well done, Earth.