Your aurora is showing 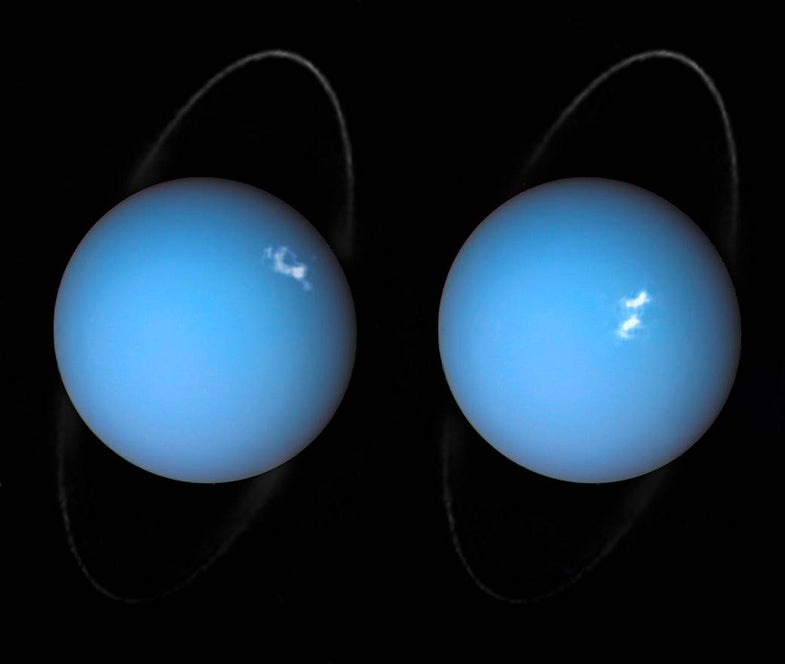 Uranus may smell like farts, according to some recent scientific speculation, but it’s still a majestic ice giant. And it’s got a lot going on. A new photo taken by NASA’s Hubble Space Telescope captures a bit of a light show. Just like Earth, Uranus sometimes boasts auroras similar to the Northern Lights.

Auroras occur when charged particles interact with a planet’s magnetic field and collide with gas atoms in the upper atmosphere, which then give off light. On Earth, this happens when solar winds—plasma full of charged particles from the sun—get up in our business.

Solar wind does make it the 1.8 billion miles or so out to Uranus (in fact, the winds don’t even start to slow until they reach 75-90 times the distance between the Earth and the sun, or around 7 to 8 billion miles). In 2012 and 2014, scientists tracked bursts of solar wind until they produced powerful auroras on the frosty globe.

On other planets, auroras have been known to have other causes as well: some aurora flare-ups on Jupiter are likely caused by violent volcanic activity on its moon Io, which spews electrons and electrically charged atoms out into space.

Auroras are less closely studied on Uranus than on other planets, but it’s a world we don’t know an awfully lot about. In fact, the pretty pictures snapped by the Voyager 2 spacecraft as it cruised by in the 1980s are still our best view of the ice giant. Even the image seen above is a composite, cobbled together using Hubble observations of auroral activity with Voyager 2’s better pics. 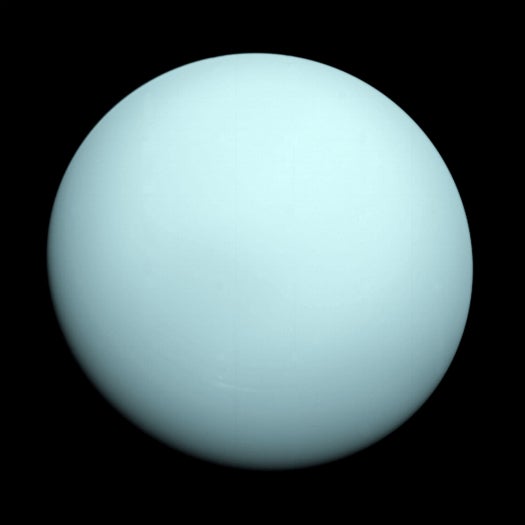 But while Voyager 2’s images made Uranus out to be a smooth, featureless disk, later studies have revealed that the planet is probably full of surprising activity. Wind speeds can reach 560 miles an hour, for one thing. So that sounds fun.

We came (sorta kinda) close to learning a whole lot more about Uranus: when NASA scientists evaluated future mission extension options for the Cassini orbiter in 2008, a mission out to the ice giants was one of the floated options. But it would have taken an estimated 1.4 to 2.4 years for the spacecraft to escape the Saturn system, and another 20 years for it to reach Uranus. That’s a long time to expect a probe to outlive its primary mission. The final verdict was summarized thusly: Giant planet science unlikely. Instead of taking a peek at Uranus, Cassini will do a majestic, ultimately fatal swan dive into the space between Saturn and its rings—another thoroughly uncharted territory, to be fair.