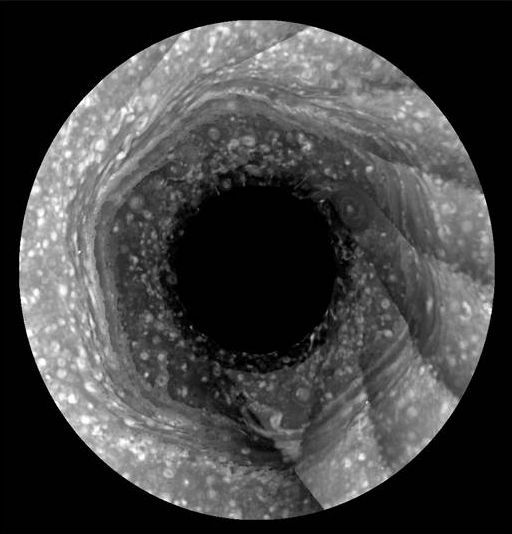 Saturn’s north pole holds something even more strange than a globe-trotting Santa Claus — a giant hexagon shape within the planet’s atmosphere. Now NASA’s Cassini spacecraft has imaged the whole hexagonal pattern in visible light for the first time.

The hexagon has remained a mystery ever since NASA’s Voyager spacecraft first discovered it in the early 1980s. Cassini has used its spectrometer to observe the hexagon in both visual and infrared light since 2006, but at lower resolution than the newest visible-light images.

Scientists speculate that the six-sided shape represents the path of a jet stream, but still don’t understand what controls the jet stream in such a rigid manner. The latest image mosaics created by Cassini show waves radiating from the hexagon corners, and also reveal a multi-walled structure within each hexagon side.

One of the most unusual features within the new images is a large spot inside the hexagon. The spot could have connections to an earlier large spot located outside the hexagon, which was imaged by Voyager but eventually disappeared in 1991. That’s the year when Saturn entered its long winter polar night, with emphasis on long – a whole Saturn year lasts about 29 Earth years.

Cassini’s latest photo opportunity only came about after Saturn’s August 2009 equinox, which signaled the start of northern spring.