A portrait of the planet in high-resolution 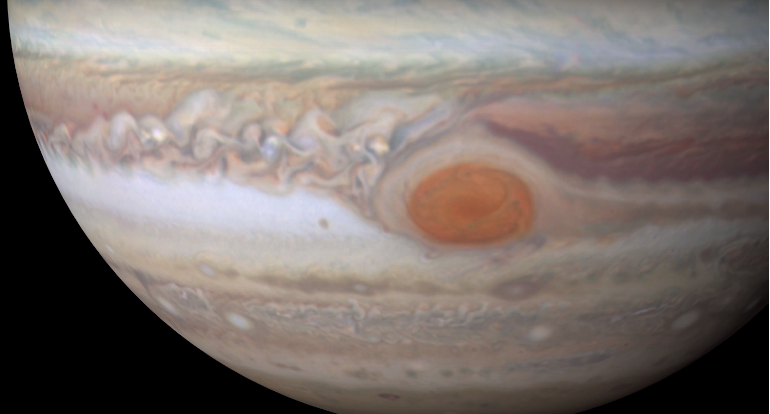 Every year, the Hubble Space Telescope snaps a family portrait of the Solar System. It images each planet in detail, giving scientists a chance to spot any changes over time.

Jupiter is the first to get its new close-up, and the new ultra-HD 4K images have revealed some interesting new features, including a rare wave just above the planet’s equator, and a stringy feature in its Great Red Spot.

“Every time we look at Jupiter, we get tantalizing hints that something really exciting is going on,” said NASA planetary scientist Amy Simon in a press release. “This time is no exception.”

The vertical lines point to the wave, while the arrows indicate cyclones.

Scientists haven’t seen anything like Jupiter’s wave since Voyager 2 flew past the gas giant in 1979. At the time, scientists thought it might have been a fluke, but the new observations suggests it’s just rare. Similar waves can be seen in Earth’s atmosphere when cyclones are forming.

During the 10-hour observation period, scientists could see the new filament that threads through the Great Red Spot (a storm larger than the entire Earth) twist and rotate.

Before and after images show the movements of a filament that threads through Jupiter’s red spot.

Jupiter’s red spot is 150 miles shorter than it was last year, confirming that the giant storm continues to shrink.