What’s It Like to Film IMAX 3D In Outer Space?

Using a specially-modified 3D camera, Atlantis astronauts filmed their delicate repair of the Hubble telescope. This is how they did it 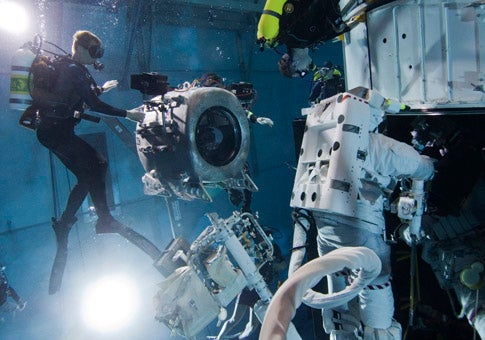 Filming an IMAX 3D feature about NASA’s last manned mission to repair the Hubble Space Telescope created challenges that even Christopher Nolan’s crew never faced on the set of “The Dark Knight.” Using only eight minutes of film, astronauts had to capture the essence of five long spacewalks using a custom-made IMAX camera as big as a submarine. Thankfully, IMAX director and producer Toni Myers was there to help.

While Meyers could only provide guidance from terra ferma, she worked carefully with Shuttle Atlantis pilot Gregory Johnson to turn him into the ideal IMAX astronaut/auteur during the ninety-minute day-night cycles as the space shuttle orbited Earth. This included knowing exactly when to roll film.

“It’s really hard to cherry pick out of a six-hour spacewalk,” Myers says.

Trying to get it right required a special IMAX camera that was operated remotely from inside the shuttle. Conventional IMAX 3D cameras capture images from the left and right eye views on two different strips of film, but weight constraints led filmmakers to design a more compact 700-pound camera that can shoot both left and right views on a single, mile-long strip of film.

Myers first used such a camera for her 2002 IMAX film called “Space Station 3D.” Water bags were stuffed into the camera to help protect the interior film from damage due to space radiation.

Filming both left and right views simultaneously on a single strip also meant adjusting the camera speed. To maintain 24 frames per second, it has to go twice as fast.

Johnson and other astronauts trained with a similar camera during simulated spacewalks in NASA’s Neutral Buoyancy Lab over the course of eight months. The actual camera sat installed in the cargo bay of the space shuttle Atlantis, where Johnson could control and see its view via a computer screen and by using special software (no massive steadicam rigs required).

Myers had to take a relatively hands-off approach out of necessity, even though she worked out a shooting schedule and plan beforehand with the astronauts. But her past years working on similar IMAX adventures in space have led her to trust astronaut instincts during filming.

“We always encourage them that if an alien flies by, they’re the director and they take the shot,” Myers joked.

Now Myers can only wait until June to see if her efforts have paid off. The camera is slated for unloading after the space shuttle Atlantis gets flown back to Florida from California, following a detour landing at Edwards Air Force Base because of bad weather.