The search for extraterrestrial life elsewhere in our universe has taken many forms, from the radio signal searching undertaken by... 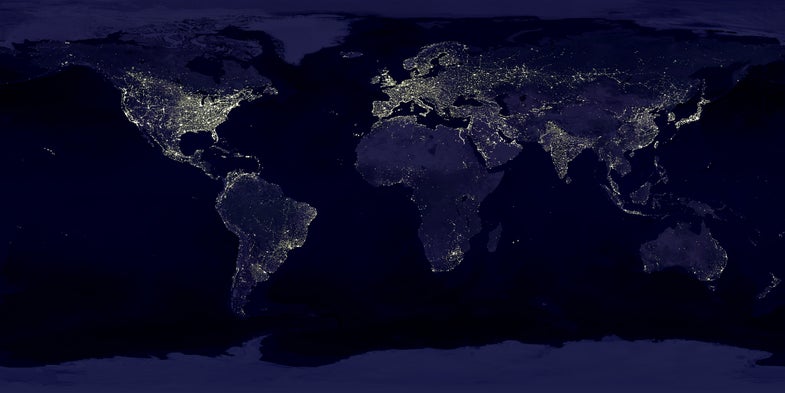 The search for extraterrestrial life elsewhere in our universe has taken many forms, from the radio signal searching undertaken by SETI to the rovers and probes deployed elsewhere in our universe. But if it’s intelligent civilizations we’re looking for, say a couple of Harvard and Princeton researchers, we can likely find them just by literally looking for them. Alien civilizations that evolved in the light from their own stars would likely artificially illuminate their cities, and we should be able to find them by looking for illumination on the night side of exoplanets.

In a paper available on arXiv, Abraham Loeb of Harvard and Edwin Turner of Princeton point out that it’s entirely plausible that other alien civilizations, if they exist, would artificially illuminate their spaces just as we have. And if they have, this light will be distinguishable from natural illumination, even at astronomical distances.

A planet orbiting its star will reflect back natural light from its star in predictable ways as it makes its way around its elliptical orbit. But measurements of artificial light would remain relatively constant. So a planet with no artificial light should return measurably different changes in light than a city that is well illuminated.

Loeb and Turner admit that this is an imperfect way to hunt for alien civilizations at a distance–the method more or less requires that the brightness of the day side and the artificially illuminated be somewhat comparable. That’s not the case on Earth, and would likely not be the case on alien planets. But the technique is a starting place from which future SETI strategies could be developed.

And besides, for objects closer to our own solar system we wouldn’t even have to rely on light measurements. Our best optical telescopes could spot a Tokyo-scale city on another planet or asteroid at up to 50 astronomical units from Earth. That means we could actually see a Tokyo-scale city as far out as the Kuiper Belt without resorting to mathematical tricks.