Chuck Berry is gone, but his music is still flying through the cosmos

The Voyager spacecraft are bringing “Johnny B. Goode” into deep space 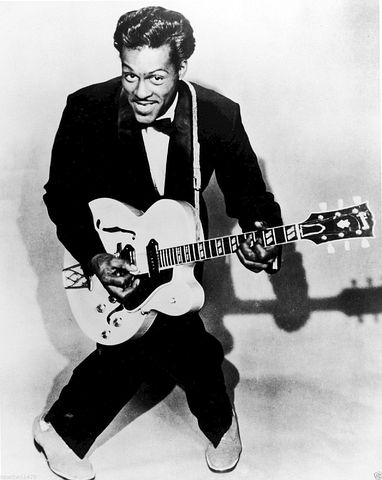 "If you tried to give rock and roll another name, you might call it 'Chuck Berry'." - John Lennon. Pixabay
SHARE

Chuck Berry may be gone, but his music is still hurtling into deep space.

The legendary rock-and-roller died at 90 on Saturday in St. Charles, M.O., and although us Earthlings can blast the scintillating sounds of his amplified Gibson guitar in perpetuity, NASA has ensured that life in the cosmos might have the same chance. The two Voyager spacecraft, launched in 1977, each have a gleaming gold-plated copper record entitled “The Sounds From Earth,” fastened to their sides. The album contains 90 minutes of music, and along with a concerto from Bach, a Navajo night chant, and Peruvian panpipes, whomever—or whatever—comes across it will be gifted with Berry’s potent tale about “Johnny B. Goode,” a country boy who “could play a guitar just like ringing a bell.”

Of course, not every extraterrestrial being will be able to listen (should any exist). As cosmologist Carl Sagan, who helped compile the 27 tracks, once noted, “the spacecraft will be encountered and the record played only if there are advanced spacefaring civilizations in interstellar space.” The album’s aluminum cover, also meant to protect the LPs from menacing micrometeorites, contains illustrated instructions for curious, intelligent minds to interpret and build a record player from. To facilitate extraterrestrial listening, NASA kindly sent along a record-playing cartridge and needle.

If advanced life can get the disks spinning, they’ll be exposed to more than Earthling music. The album contains human voices in 55 languages, 12 minutes of natural sounds—including thunder and whales—and digital pictures of Earthlings eating, drinking, and shopping. Taken together, they are “Presents from a small, distant world,” said President Jimmy Carter. “A token of our sounds, our science, our images, our music, our thoughts and our feelings.”

“Johnny B. Goode,” however, almost didn’t make it into the yawning cavities of interstellar space. Perhaps the most vibrant, amplified, and grooving number in the collection met resistance within the group tasked to create the cosmic playlist. Music scholar Alan Lomax, who, to his credit, advocated for the inclusion of folk music from around the world, called rock music too adolescent to be included. So should any smart extraterrestrials ever groove to Berry’s 1958 classic, they should thank Carl Sagan, who famously argued, “There are a lot of adolescents on the planet.”

Indeed, Berry’s rock and roll enlivened teenagers in the 1950s. Simply put, the music radiated an ineffable, rebellious electricity—and still does. The lyrics were topically light—songs about dancing into the late night, stealing hearts, and “studyin’ hard and hopin’ to pass”.

“Let’s put it down frank. Rock had more passion to (kids in the ’50s) because (they) were in school,” Berry told the L.A. Times.

And American teenagers weren’t the only ones listening. A British kid named Keith Richards started copying Berry’s slick licks in 1950s, and eventually made them his own. “It’s very difficult for me to talk about Chuck Berry because I lifted every lick he ever played. This is the gentleman who started it all, as far as I’m concerned,” said the swashbuckling Rolling Stones guitarist at Berry’s induction into the Rock and Roll Hall of Fame in 1986. Unsurprisingly, Berry was among the first class inducted.

And if it weren’t for Chuck Berry, there might not have been The Rolling Stones. While at college, a young man named Mick Jagger approached Richards to chat. Both men happened to be strolling around campus, each with a Chuck Berry album in hand, proudly flaunting their rock and roll proclivities.

After hearing of Berry’s death on Saturday, a tweet emerged from Richards’ account: “One of my big lights has gone out.”

Under all the praise, Berry acknowledged that he made some poor decisions in life. He was jailed at 17 for stealing a car at gunpoint, and sent back in 1979 for tax evasion. But he separated his music from his own—sometimes bombastic—personality. “Everything I wrote about wasn’t about me, but about the people listening,” he once said.

Although his influence in the cosmos has just begun, here on Earth, Berry did a commendable job of reaching diverse audiences. As a child, he was denied access to the Fox Theatre in St. Louis, M.O., because he was black, and denied a gig for the same reason. But he didn’t shy from playing for both black and white audiences, and he opened an integrated club in St. Louis, “Berry’s Club Bandstand,” three years after Rosa Parks refused to give up her seat on a bus.

Decades after being told he couldn’t enter the Fox Theatre, Berry headlined there for his 60th birthday bash, organized by the Stones’ Keith Richards. Before the show, while filming their rehearsal for a documentary, Richards suggested that Berry move his amp to improve the audio quality of the recording. “Don’t touch my amp!” cried Berry, as they bantered.

“This is going to be around after you’re dead and gone,” argued Richards.