Imagine you’re driving across the Mojave Desert, and somewhere in the middle of absolutely nowhere you realize that the next... 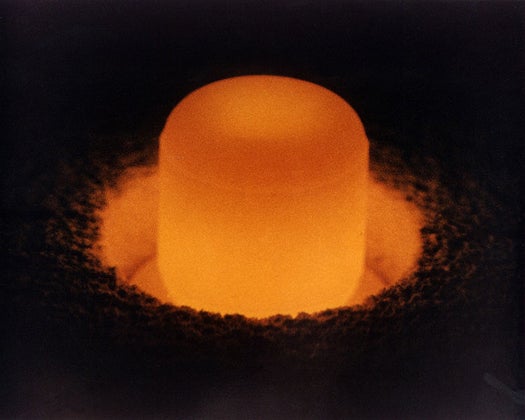 Imagine you’re driving across the Mojave Desert, and somewhere in the middle of absolutely nowhere you realize that the next gas station is further away than your car can travel on its current supply of gasoline. What next? That’s the problem NASA mission planners are facing as the agency’s supply of plutonium-238, the fuel used to power deep space probes like Cassini and surface scouts like the upcoming Mars Science Laboratory, are dwindling. Unfortunately, that leaves NASA in a pretty tight spot: we’ve depleted our reserves of plutonium-238, and there isn’t anywhere to refuel ahead on the horizon either.

Plutonium-238 powers spacecraft via heat given off by its radioactive decay. A small pellet—smaller than one’s fist—glows red from its own heat and can power equipment in extremely hostile environments like the vacuum of space, where temperatures vary greatly. For missions to the outer planets or the Kuiper belt, where sunlight is a thousand times lower and the temperature near absolute zero, plutonium-238 is the only option, as solar power is too weak to provide an effective charge.

But this special brand of plutonium was a byproduct of Cold War activities and hasn’t been produced by the U.S. since the ’80s (plutonium-239 goes in nuclear warheads, so naturally we keep plenty of that laying around). NASA has launched nearly two dozen missions over the past four decades that were powered by plutonium-238, including the Voyager probes, the Galileo probe that studied Jupiter and its moons, and the Cassini that is currently doing laps around Saturn. Those missions ran on either U.S. reserves of plutonium-238 or excess stock purchased from Russia. But now neither nation is producing the stuff, and even if we started again today, it would take eight years to build up production to the volumes necessary for annual deep space missions.

NASA included $30 million in its 2010 budget for the Department of Energy to move toward new production, but the final price tag would likely be five times that to ramp up production to sustainable levels. As it turns out, getting just the $30 million may prove impossible. The Senate chopped that number down to less-than-generous $0 during the annual budget haggle this summer; a slightly more benevolent House left NASA with $10 million for its plutonium proposal.

Right now, NASA has enough plutonium-238 for the Mars Space Laboratory and the next planned mission to the outer planets. With any leftovers the agency could launch a research mission to test technology that could convert the heat from plutonium-238 to electricity more efficiently. Of course, after that there will be no more plutonium-238, so it seems that mission is a bit of a moot point. After that, NASA is grounded until it can find another fuel, or convince those holding the purse strings to turn on the cash spigot and refuel deep space exploration.