A “violent encounter with Jupiter” may have hurled a fifth gas giant out of our solar system billions of years... 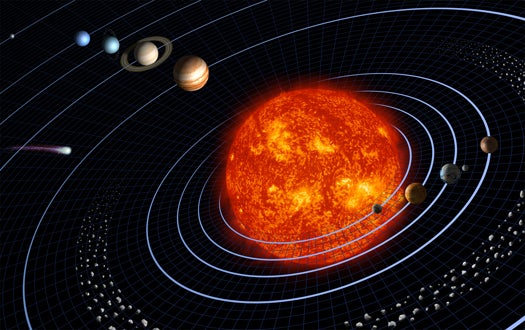 A “violent encounter with Jupiter” may have hurled a fifth gas giant out of our solar system billions of years ago. A simulation done by the Southwest Research Institute in Boulder, Colorado suggests that our solar system may have included another gaseous giant, placed between Saturn and Uranus. The computer models may prove how the planets of our solar system settled in their current position, a long-standing source of mystery to astronomers.

The formation of Uranus and Neptune has puzzled astronomers for years. The assumed disc of gas and dust that formed the two gas giants would have been too thin at their current locations to form the icy planets. It’s more likely that the two, and Jupiter and Saturn, were closer together in the earlier days of our solar system, and spread out once the disc was depleted. The “ great gravitational bullies of the solar system, Jupiter, Saturn, Uranus and Neptune” jockeyed for position after being formed. According to past simulations, which only included the current planets, either Uranus or Neptune at least should have been jettisoned into deep space. “People didn’t know how to resolve that,” says David Nesvorny of the Southwest Research Institute. He offers a new explanation: “A sacrificial ice giant between Saturn and Uranus.”

The existence of this new planet, who some of Nesvorny’s colleagues are calling Hades, is supported by the results of 6,000 computer simulations. Previous simulations only included Jupiter, Saturn, Uranus and Neptune in the outer solar system. But these new simulations also included models with five planets, testing different starting position scenarios. In 90 percent of the four planet models, the simulations ended with only three planets left in the outer system. But in half of the five planet simulations, four planets in very similar positions to our current solar system resulted. The results with the most similar positions started with a fifth planet between Saturn and Uranus, and ended with this planet cast out after an encounter with Jupiter.

These results also suggest that Jupiter “jumped” to its current position from one that was closer to the sun. This occurred in the simulations that allowed the four inner planets, including Earth, to survive the clash of the gaseous titans. “This jumping Jupiter theory is very difficult to achieve for the four-planet system. But it’s a natural consequence of the five-planet system,” says Nesvorny.

The planetary battle could also explain the heavily cratered surface of the moon caused during the “late heavy bombardment.” The Kuiper Belt and Oord Cloud were not fully formed, and the disturbance could have flung debris from these regions of proto-planets beyond Neptune towards the inner system.