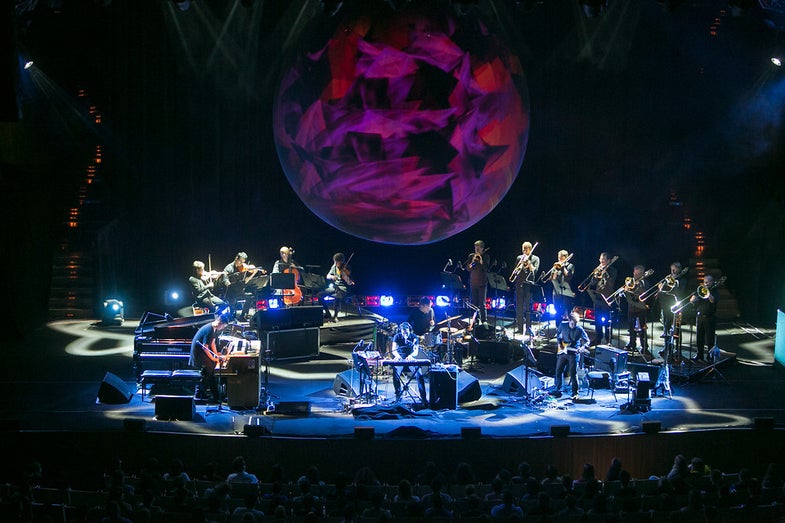 I could only see about half of the massive orb, somewhere near 30 feet in diameter, that hung over the musicians. My view was blocked by one of the protruding boxes in the enormous, opulent Beaux Arts-style Howard Gilman Opera House at the Brooklyn Academy of Music. Blue, green, purple, and red lasers stuttered and waved over the audience’s heads. Giant disco balls hurled spots of light onto the Italianate ceiling high above. Seven, count them, seven trombonists bellowed out the low end. “Jupiter…is the loneliest planet” sang Sufjan Stevens, his mournful, breathy voice sharpened by a vocoder. Around the edge of the box, I could see Jupiter’s famous “Great Red Spot” projected on the right half of the sphere. “This rules,” I whispered to my friend.

Yesterday was the American premiere of “Planetarium,” a performance piece based on our own solar system composed by indie music mainstays Sufjan Stevens and Bryce Dessner (of The National) and modern classical composer Nico Muhly. Stevens is perhaps best known for his two state-based albums, Michigan and _Illinois_–his music is a mix of lo-fi childlike sounds and grand instrumentation and ambition. He’s the kind of guy who’d have a recorder player in an orchestra while performing a nine-minute piece about a midwestern town nobody’s ever heard of. Dessner’s group The National performs moody, melancholic music anchored by one of the rare baritone singers in rock. Nico Muhly has composed operas and choral pieces, but is probably best known for his work with indie bands like Grizzly Bear and Antony and the Johnsons.

“Planetarium” is a 60-minute presentation, with individual pieces focusing on each planet in our solar system (plus our moon, the sun, and Pluto. The composers say Pluto was included out of “pity.”). The composition includes seven trombonists, a string quartet, and a drummer, with Nico Muhly on keyboards (at least three, a mix of acoustic piano and synths), Bryce Dessner on guitar, and Sufjan singing and doing various indistinct keyboard/computer bleep-bloop things. 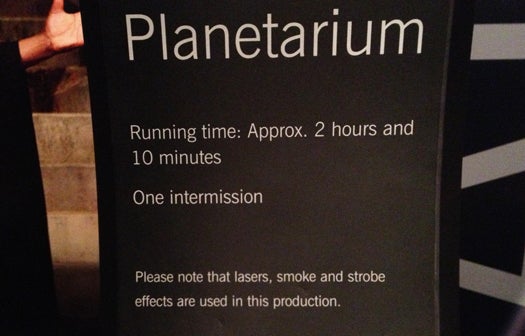 A major part of the presentation is the orb, a gigantic spherical screen on which several projectors scattered around the auditorium beamed pretty colors and pictures. Sometimes the orb was literal; during “Mercury,” the final piece performed that night, an actual NASA image of the closest planet to the sun was projected. But “Earth” was an array of late-1990s-looking undulating 3-D waves in blue and white, “Saturn” was abstract snippets of the planet’s rings, and one of the planets, I’m not sure which, was looked like an eyeball, pupil and all. Least interesting was the visualizer effects that occasionally interrupted what was typically swirling, evocative colors.

Then there were the lights. Purples and blues scanned over the audience. Lasers did their laser thing. I was born after the laser-show craze; my knowledge of laser shows is mostly restricted to that one episode of Freaks and Geeks where Ken makes out with Tuba Girl. But they should come back! They are super cool!

The music is uneven, though that didn’t bother me much; it sounds like late-period Sufjan Stevens, the Sufjan Stevens of The Age of Adz rather than Michigan, who is enamored with dissonant noises from computers more than the trills of piccolos and glockenspiels. This works, sometimes; the songs of the two gas giants, “Jupiter” and “Saturn,” build to an astounding power, helped by the buzzy undertone of pretty much every trombonist in Brooklyn. They are as strong as any song on The Age of Adz, I’d say, with one hell of a hooky chorus. “Earth” is beautiful, though oddly unearthly, with heavily autotuned vocals and Bryce Dessner’s bowed guitar. “Mercury” too is thoughtful and simple, not violent as you’d expect that planet of extremes to be. “Uranus” is cool and distant, appropriate for a planet about which we, really, know almost nothing. “Neptune” is mournful, its lyrics referencing “strange waters” and ending with the phrase “It’s best if I drown.” But many of the other planets are simply noise experiments, never congealing into songs. And it was sometimes hard to tell which planet was actually being serenaded, as their order did not seem to have anything to do with their location within our solar system.

It felt like we Brooklynites had tapped into something much grander than us.The lyrics are simplistic. Sufjan Stevens is a very specific kind of lyricist; he has written powerful and heartbreaking narratives, but they are of a type. At his best, like “Casimir Pulaski Day” from his album Illinois, he can capture a childlike tone better than any other lyricist out there–plainspoken observations, shock and wonder at how the approaching adult world works. But he can’t really get beyond that, and it’s sometimes to his detriment. “Mars” is about…the planet’s namesake, the Roman god of war. “I am the god of war, I reside in every creature // Dispose of the future, or put away your sword,” he sings. Not that I was expecting ruminations on the possibilities of ancient Martian floods, but still.

Sufjan, Dessner, and Muhly did not address the audience until the performance was nearly over. After the penultimate planet, “Earth,” Muhly spoke–cheerful, humble, totally non-pretentious. This was a fun event, a goofy “let’s put on a show” taken to a startlingly high level of professionalism. (The string quartet performed by themselves before the “Planetarium” performance; they were outrageously good, one of the best quartets I’ve ever seen.) “If you’ve been following along,” said Muhly, “you know what’s left. This is ‘Mercury.'”

And by that time it no longer felt like an indie-rock-goes-classical experiment; it felt bigger, older. It felt like we Brooklynites had tapped into something much grander than us, some sort of, I don’t know, almost Druidic worship of the planetary bodies. Let’s all gather around and worship that which we can see in the heavens. Let’s have beautiful music and beautiful visuals. Let’s sit together in the dark and marvel at what’s out there, what we can see and what we do not yet know.

After “Mercury” finished, the crowd got on its feet for a standing ovation. Sufjan and Dessner are both used to this; that means “we expect an encore.” Encores are required these days, pretty much. But, um, we were out of planets. “It doesn’t seem like the most likely encore situation,” my friend said. But sure enough, out came the core group of the three composers. What could they have prepared? We were out of planets, but not out of near-space objects. I wondered what the final piece could be. “Europa”? “The Asteroid Belt”?

Instead, they played a delicate, autotuned rendition of “Somewhere Over the Rainbow.” It was lovely.

“Planetarium” is playing all this weekend at BAM. An audio version may or may not be released.