How Juno Broke The Distance Record For Solar-Powered Spacecraft

NASA's mission to Jupiter is brought to you by: the Sun, from 500 million miles away 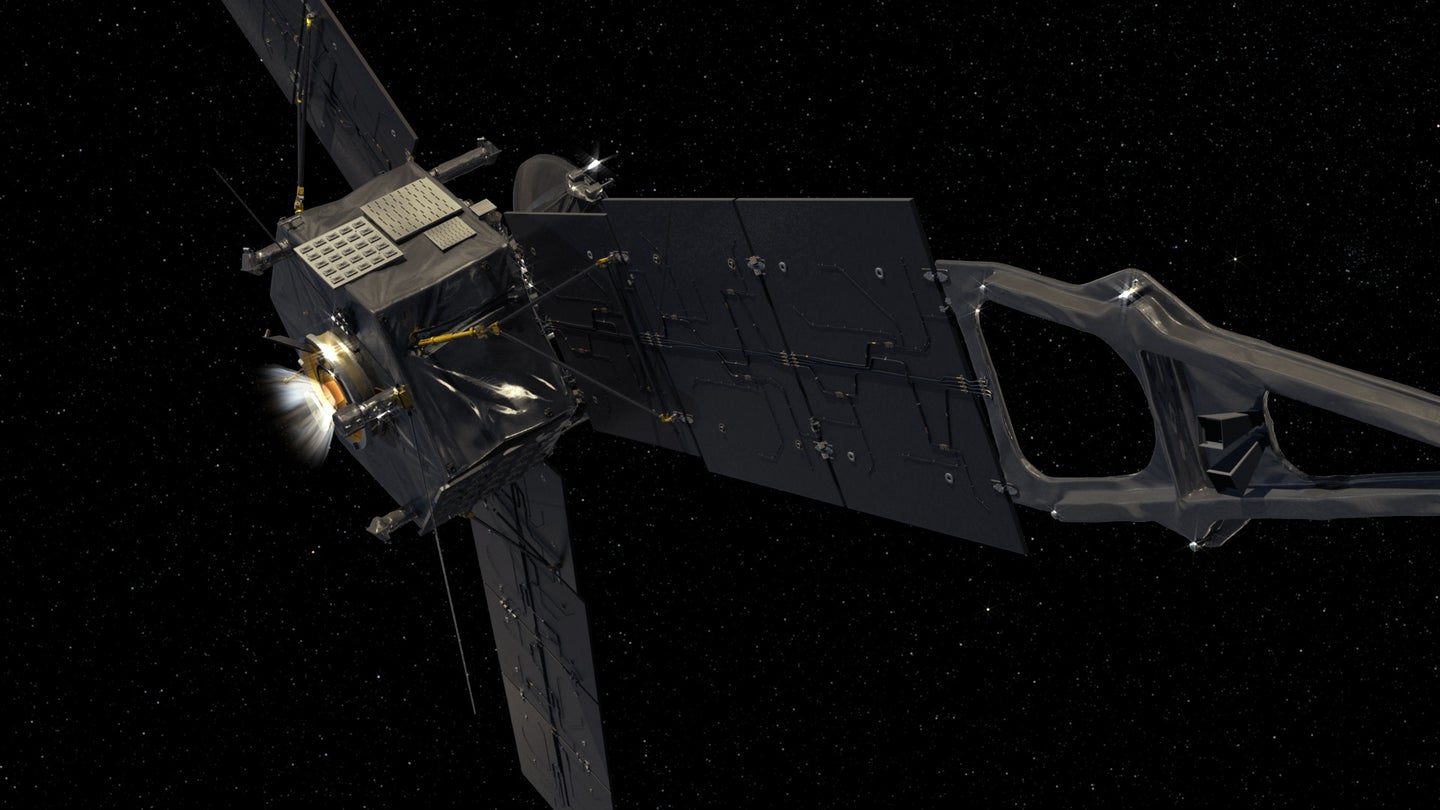 NASA’s Juno spacecraft has blown through the ribbon at the end of the robot race, breaking the record for farthest distance traveled using solar power. The spacecraft is on its way to rendezvous with Jupiter on July 4.

Solar-powered spacecraft are very common, but they are never used this far out into space, and for good reason. The amount of sunlight at Jupiter is 25 times lower than what we get here on Earth. This wouldn’t usually be enough energy to power a basketball court-sized spacecraft like Juno, but it is, and that’s due to a few different factors.

A Place In The Sun

Galileo was the first and only other spacecraft to orbit Jupiter. When it launched in 1989, solar panel efficiency was too low to work in deep space–only about 12 percent of the light’s energy got turned into electricity. But when Lockheed Martin designed Juno in 2003, the efficiency had more than doubled to 28 percent, just enough to make the first deep space mission powered only by the sun’s slight touch from 500 million miles away.

Usually robotic crafts like the Curiosity rover, Cassini, New Horizons, and Galileo receive their power from an onboard RTG, or Radioisotope Thermoelectric Generator. These work by using the heat released by a radioactive material–in this case, plutonium–to generate electricity. An RTG is a great way to provide energy and warmth to an expensive spacecraft’s fragile electronics in the cold void of space, but there are a few catches to using an RTG. Radioactive material is incredibly dangerous, increasing the liability of a launch, and very expensive. It’s also difficult to produce in an era of nuclear non-proliferation–which is why NASA only has a few RTG spacecraft batteries left.

When the concept for Juno first started, there was still enough plutonium around to give Juno an RTG power source, but that never factored in.

“We never even considered designing Juno with an RTG,” says Juno engineer Kevin Rudolph from Lockheed Martin. “We knew all along we would do it with solar power.” Because Juno was one of NASA’s lower budget New Frontiers missions, like New Horizons and the asteroid-hunter Osiris-Rex, the Juno team had to keep things simple. “We knew roughly how expensive the Cassini RTGs were, and they were built when there was still a decent amount of plutonium left, “ explains Rudolph. “Even with a good supply of plutonium they were still very expensive so it wasn’t an option for us.”

Juno has three 30-foot solar array wings, outfitted with a total of 18,698 individual solar cells. In total they put out about 500 watts of power, which is more than enough to operate all of Juno’s science instruments and keep the electronics warm.

It’s not just the updated solar efficiency that makes this mission possible, but the inherent design of every single element on the spacecraft. Scientists and engineers built the instruments to be as energy efficient as possible, and even planned the mission trajectory to utilize the solar cells.

The engineers at Lockheed designed Juno so that it would face the sun most of the time, stocking up on solar power. The unique polar orbit keeps Jupiter from eclipsing the spacecraft, providing a constant stream of electricity.

To make sure this system worked before they strapped Juno onto a rocket, the engineers put the solar cells in a test chamber and cooled them to a frosty -290 degrees Fahrenheit, the temperature the spacecraft would live in while at Jupiter. While the panels were frozen, the team shined a very dim light on them and simultaneously blasted them with an electron gun to mimic the harsh radiation environment at Jupiter. “By doing this test we were able to calculate how many solar panels we would need in order to run Juno,” explains Rudolph. “Turns out we needed a 50-square-meter surface, and we divided that into three separate wings.”

Not Quite Everywhere Under The Sun

Because of this design choice made 13 years ago, Juno has revolutionized how a deep space mission can operate. For future spacecraft traveling to the Jovian system, this means that a life powered by the sun can become the new norm. Missions farther out, to places like Saturn, are unfortunately too far out to have solar-powered visitors at this point. Saturn is another 1.2 billion miles beyond Jupiter, so there just isn’t enough sunlight there to power a spacecraft. But as solar technology continues to advance on Earth, the efficiency will rise, possibly someday leading to even deeper space missions powered only the sun’s rays.

Because NASA only has a few plutonium reserves left, it ultimately limits the number of missions that can venture out to places like Saturn, Neptune, Uranus and the Kuiper Belt. Luckily, though, just last year the Department of Energy teamed up with NASA to begin producing a new supply of Plutonium-238, eventually restocking NASA’s shelf of RTG’s.

Juno arrives at Jupiter on July 4 after a 1.7 billion mile journey. When it arrives will break a few more records, too; not only will it be the fastest spacecraft ever, moving away from Earth at a whopping 165,000 miles per hour, but Juno will orbit closer to Jupiter than any spacecraft in history, providing the highest resolution images ever taken of the planet. Not bad for a smaller budget, solar-powered science robot!

Juno’s mission will be to figure out if Jupiter has a solid core or not, and it will peek through the atmosphere to better understand how gas giants like Jupiter form. Because Jupiter is the largest planet in our solar system, it holds many answers to how our solar system formed, and might even give us a better idea of how Earth formed as well.

Popular Science will be at NASA’s Jet Propulsion Lab for Juno’s flyby! Follow our coverage here.

Correction 7/1/2016 at 14:33PM: A previous version of this story misstated Juno’s distance from the sun. We regret the error.