The most hip-hop of the small orbiters 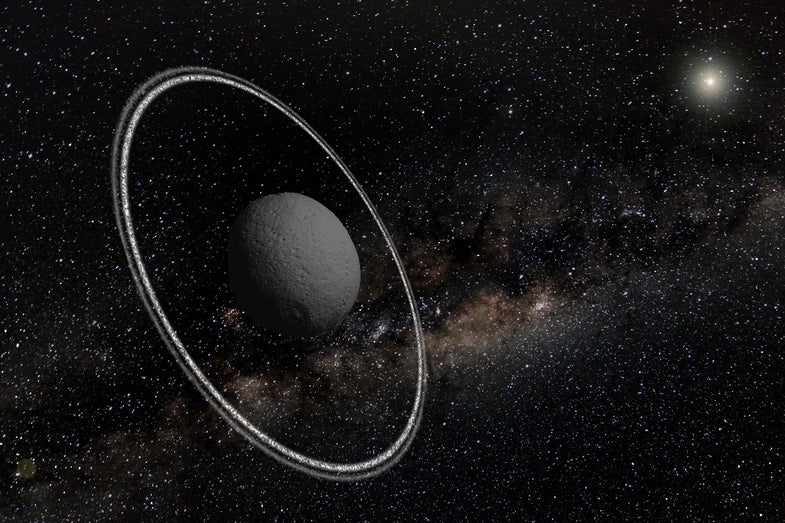 Meet (10199) Chariklo. It’s an asteroid-like object that’s a little more than 90 miles in diameter. It orbits the sun between Jupiter and Neptune. And like its giant gas neighbors, it has rings. Asteroids have rings, too! (Go and brush your shoulders off.)

This is the first time any object besides a Solar System gas giant—Jupiter, Saturn, Uranus, Neptune—has been found to have rings. Chariklo is technically a centaur, one of many centaurs that orbit between Jupiter and Neptune and have both asteroid-like and comet-like properties, which makes them a bit of a mystery. Asteroids and comets are distinguished by where they were formed and what they are made of; Chariklo, the largest of the centaurs, happens to be is more asteroid-like.

Astronomers now think Chariklo has two flat, dense, thin rings, about 4.3 miles (7 kilometers) and 2 miles in width, with a 5.5-mile gap between them. The rings likely have ice in them.

An international team of astronomers determined that Chariklo has rings after observing it cross in front of a star on June 3, 2013. Such events, called occultations, are good opportunities for astronomers to learn about celestial bodies because they can see how the object they’re studying blocks light from the star behind it.

On June 3, the Chariklo-observing team gathered data from telescopes in Brazil, Argentina, Uruguay and Chile. The astronomers were seeking to determine Chariklo’s shape and to measure its size more exactly. They ended up learning much more. 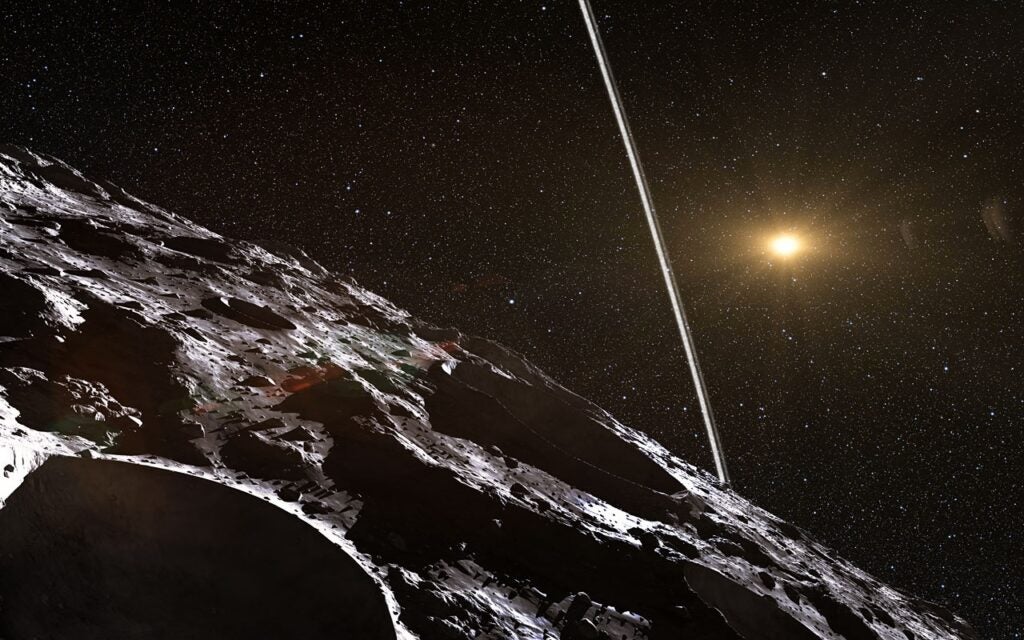 Chariklo blocked light from the star not only during the expected time but also before and after, suggesting there was something surrounding the centaur. Data from the South American telescopes let astronomers determine the shapes of these rings.

The ring hypothesis helps explain a series of unusual observations about Chariklo. Between 1997 and 2008, the centaur appeared to get dimmer. It also gradually stopped reflecting wavelengths of light that astronomers associate with ice. After 2008, it brightened again and the ice seemed to reappear. The team now thinks that during that dimmed decade, Chariklo’s ice-containing rings moved so their narrow edges faced Earth. They stopped reflecting light as brightly, making the otherwise dark-colored centaur seem duller. Meanwhile, the ice they contained seemed to “disappear” from the surface of the centaur.

Could other asteroid-like objects have rings, too? In a paper they published today in the journal Nature, the Chariklo-observing astronomers wrote that scientists have observed many occultations involving asteroids in the main asteroid belt between Mars and Jupiter. None found rings. In 1993 and 1994, a series of occultations involving a centaur called Chiron revealed it has material coming off of its surface in a jet-like stream. But astronomers are unsure whether it’s just a coincidence that both centaurs have material surrounding them, or whether Chiron and Chariklo might share some physical process that made one’s jet and the other’s rings.

Meanwhile, the research’s lead author thinks there could be more around Chariklo. “So, as well as the rings, it’s likely that Chariklo has at least one small moon still waiting to be discovered,” Felipe Braga-Ribas of the Observatório Nacional in Rio de Janeiro told the European Southern Observatory.