Is It Snowing Microbes on Enceladus?

Aside from ancient Mars, the moons of Saturn might be one of the best places to look for life outside... 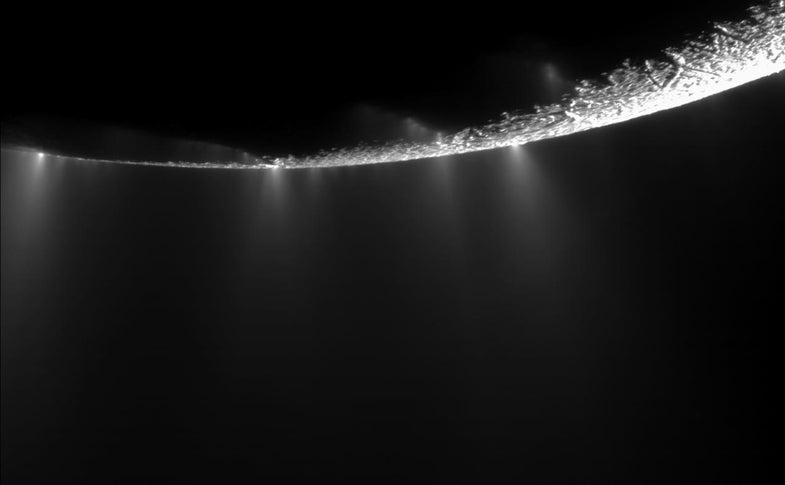 Aside from ancient Mars, the moons of Saturn might be one of the best places to look for life outside this planet. The methane lakes of Titan are promising places, but so are the spewing plumes of ice on Enceladus — and the latter would be an easy one to check, as it turns out. The Cassini orbiter just flew through them, and Cassini scientists want to go back and take a longer look.

Cassini has been examining Enceladus’ ghostly, icy plumes for several years now, tasting the water, ice and organic material flying out of them. (Organic meaning carbon-based compounds, not necessarily living material.) The plumes are also piping hot, at least in distant solar system terms — about -120 degrees F, which equates to lots of thermal energy. And perhaps the most tantalizing part? The icy particles are salty, possessing the same salinity as Earth’s oceans.

Enceladus might have a vast interior sea, and it also has an energy source in the form of massive tidal forces courtesy of its planet. Saturn’s wrenching gravitational pull flexes Enceladus’ interior, generating heat. Heat and salty water sounds a lot like environments on Earth — like subterranean microbe communities in places like Yellowstone, or perhaps the thriving ecosystems that exist in hydrothermal vents in the absence of sunlight. Could Enceladus host any such life forms?

It would be fairly simple to find out, according to Carolyn Porco, a renowned Cassini scientist and leader of the spacecraft’s imaging science team. All you’d need to do is fly by and take a whiff.

“It sounds crazy, but it could be snowing microbes on the surface of this little world,” she says in an interview with NASA’s science news portal. “It’s the most promising place I know of for an astrobiology search. We don’t even need to go scratching around on the surface. We can fly through the plume and sample it. Or we can land on the surface, look up and stick our tongues out.  And voilà…we have what we came for.”

Simply flying through the plume would be easier than designing an interplanetary boat, at least. 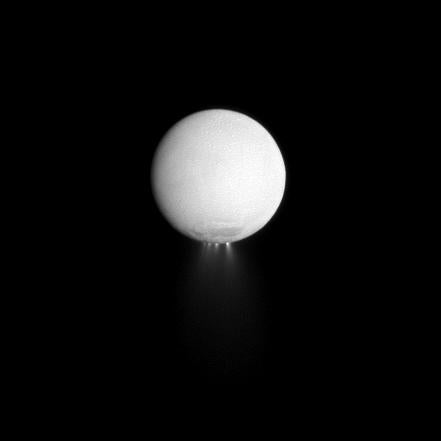 Cassini flew just 46 miles above Enceladus’ south pole on March 27, 2012, cruising right through the spewing plumes seen here. This image is from 2009.