To Crack the Mystery of the Hexagon on Saturn, Researchers Model it in Water

A giant hexagon circling Saturn’s north pole has puzzled scientists for decades. Now researchers have managed to recreate the pattern... 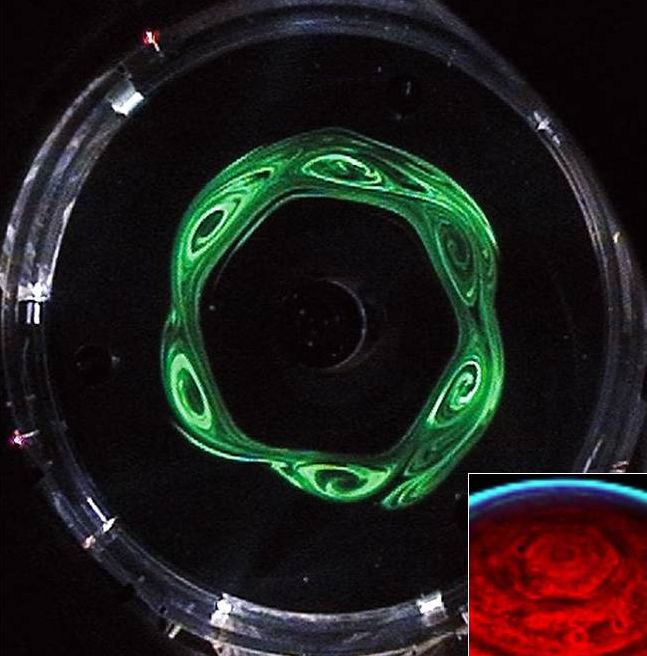 A giant hexagon circling Saturn’s north pole has puzzled scientists for decades. Now researchers have managed to recreate the pattern in the lab using little more than water and a spinning table, Science Now reports.

The Saturn hexagon seems to represent the strange rigid path of a jet stream, with each of the six sides being one Earth diameter in length. NASA’s Voyager spacecraft first spotted it in the early 1980s, and the Cassini spacecraft has followed up with more visible-light and infrared images.

Physicists at the University of Oxford set out to recreate the Saturn pattern by placing a 30-liter cylinder of water — almost 8 gallons — on a slowly spinning table. They also placed a small ring inside the water tank that whirled more rapidly than the cylinder and created a miniature lab version of the jet stream.

Green dye helped the team see how the jet stream changed over time. It turned out that the rate of ring rotation changed the shape of the pattern from a circle to just about anything, including ovals, triangles, squares and various polygons. A bigger difference between the planet and jet stream led to fewer-sided polygons.

The experiment suggests that Saturn’s north polar jet stream spins at a certain rate compared to the rest of the planet’s atmosphere which favors the hexagon pattern. Similar phenomena have shown up in the centers of hurricanes.

A full report appears in this month’s issue of the journal Icarus. But anyone craving a time-lapse spinning image of the Saturn hexagon can look here at some of Cassini’s latest handiwork.