Yes, your dog is making puppy eyes at you 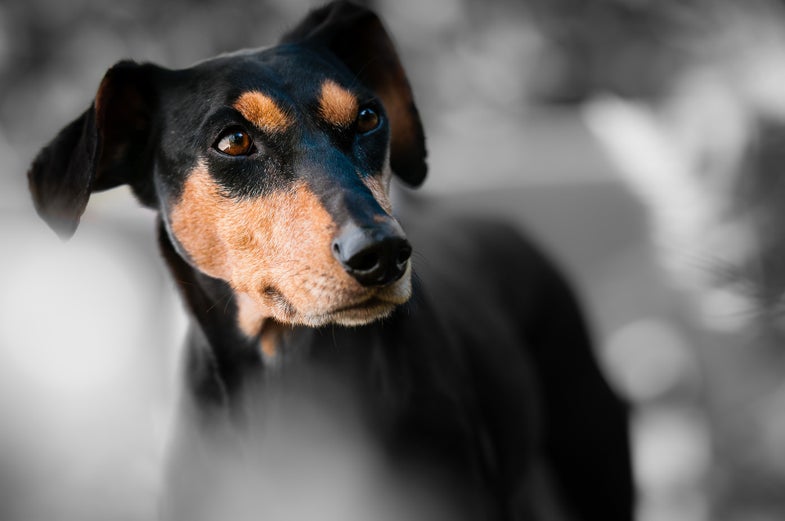 The problem with dogs is that they’re a lot like babies that never grow up. This is both a great strength and a huge annoyance, mostly because they can’t talk. Researchers who study infant learning and behavior have to rely on other cues, like how long subjects look at an object, because asking them questions is just a big waste of time. Dogs are the same, and that makes it very difficult to come to definitive conclusions about their behavior and what it means.

We know, for example, that humans interpret dog facial expressions as conveying certain emotions, and that doing so affects our behavior. Pups who raise their inner eyebrows—making those big, sad eyes up at you—are more likely to get adopted from shelters. That’s probably because we find them more adorable when their eyes are large and round, like a baby’s. The biological response to infantile features is fairly hard-wired into us, though that doesn’t make things any less tragic for the poor doggies who didn’t try to look cuter in their cages.

What we don’t know is whether dogs are changing their facial expressions intentionally. Plenty of animals look sad when they’re sad, humans included, but they look that way regardless of whether anyone else is there to see it. If an animal specifically puts on an expression when there’s someone paying attention—but not when they’re alone—that’s communication. And dogs seem to do that.

In a recent study published in Scientific Reports, animal psychologists found that pups made more expressions when their owners were looking at them than when their backs were turned. And that happened regardless of whether the dogs were offered food, so it seems that it’s not just about whether the pupper is generally excited. Food, as it turns out, has been found to be more arousing to dogs than human contact, as long as the person doesn’t say anything (some humans are the same way). If facial expressions are just an involuntary response to excitement, dogs should make the same number of expressions when presented with food and with a human’s gaze.

The fact that they don’t—that they actually make more eyebrow movements when a human is facing them—might seem obvious. But it only seems that way because we assume a lot about our pets. It’s easy for us to impose our own feelings on a sweet, loving animal who can’t correct our assumptions, but that doesn’t mean we’re right. Lots of pet owners attribute human-like emotions to their companions, even when the evidence suggests they’re mistaken. People often think that their dogs and cats feel guilt when they’ve done something wrong and punish them accordingly, but studies have found that this is just an expression that pets put on to appease their owners. It’s not real guilt, and they don’t really realize what they’ve done wrong. So while we think we’re punishing them for something they know they’ve done, they may just feel we’re punishing them arbitrarily.

Not all anthropomorphizing is dangerous, of course. It’s just important to figure out what’s fact and what’s fiction. Our seemingly “obvious” intuitions about our best friends can be wrong, and that’s is why canine research exists. Even if it seems like science is just confirming the obvious, we still have to confirm it.

So yes, it is a little unsurprising. Dogs evolved alongside humans, and it seems natural that they would be under selective pressure to develop traits that allow the two species to communicate, or at least to reflect the desires of the people they live with. After all, it was our desire for non-aggressive companions that caused dogs to evolve away from their wolf ancestors to become increasingly like eternal puppies. They make eye contact with humans that gives both parties a feel-good oxytocin boost, where their wolf compatriots avoid that type of bonding. And if a person meets a dog’s gaze, then points or gestures to a hidden object, the furry friends able to find the item successfully. Our canine buds are highly attuned to our behavior, even where chimpanzees and wolves are not. It follows that humans might also have taken a shine to that eyebrow-raising, eye-widening gaze that we so appropriately call “puppy-dog eyes,” thereby unintentionally causing dogs to make that expression more often.

Over time, that selective pressure may have given dogs the ability to change their expressions in order to communicate, rather than accidentally conveying emotion. We don’t know for sure that wolves don’t do this, and as social animals trying to survive in the wild they may very well do it better than dogs, or perhaps just differently. After all, primates evolved their expressive faces for each other, not for humans. If wolves have the ability too, that would suggest that it evolved out of social pressure having nothing to do with people. This paper isn’t confirming or denying any of that—it only studied the human-dog relationship. Dogs seem to use more facial expressions when a human is paying attention to them. What that means is another question entirely.

Again, that seems so obvious because it feels like your dog is trying to tell you things—and in many cases, they really are. It’s just important that we bother to confirm our intuitions using actual evidence. Because you know what happens when you assume: sometimes you get it wrong.