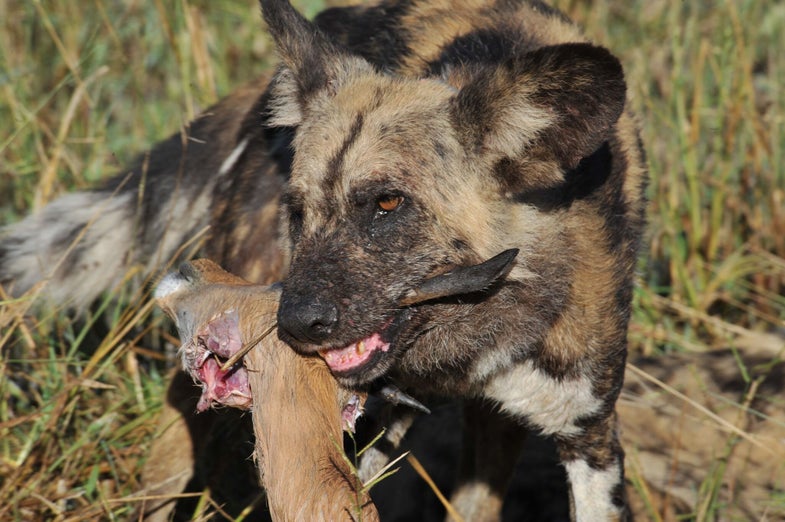 African wild dogs have excellent table manners. The puppies are allowed to eat first. Able-bodied dogs share meat with injured confederates. And packs of Lycaon pictus vote that it’s time to go on a hunt by sneezing.

Neil Jordan, a professor at the University of New South Wales who does fieldwork in Botswana, spent four years working with the dogs before he started noticing a strange pattern. When the canines were ready to hunt, they started running around and assuming a position that is probably familiar to dog owners—that head down, mouth open, ears back stance so many pups adopt when they want to go for a walk. However, dogs lower on the social hierarchy—who eat after their dominant companions—often got hungry first. To mobilize the still-satiated canine aristocracy, these dogs started to sneeze.

“I remember saying to the other researchers—‘There’s something going on with these sneezes,’” says Jordan.

The team decided to investigate. They followed five packs of wild dogs—nearly 50 total—around the Moremi Game Reserve in Botswana for about a year. They watched the dogs and took video of them while they rallied, or transitioned from resting to hunting. They measured the likelihood of movement during each rally cycle, what happened if dominant dogs led the rally, and the difference the sneezes made.

The researchers found that the number of sneezes was the most important factor that predicted departure, though leader social status and timing also played a role. With each rally, chances of success increased. First rallies only had a 26 percent chance of getting the dogs ready to go, but by the third round the probability rose to 64 percent. Odds also increased if the foremost members of the pack led the rally. A prominent dog only needed an average of three sneezes to get the group moving, while a subordinate pack member had to have about ten sneezes. This behavior may indicate which dogs are ready and willing to venture out, according to Joshua Ginsberg, President of the Cary Institute of Ecosystem Studies. “It suggests there is a pre-hunt filtering going on,” he says.

To the researchers, the sneeze was indistinguishable from the sound the dogs make when they clear dust from their nose, though they did not do an exact sound comparison. The sneezes do not cause the dogs to whip around and stare at each other, as they would if the noise was a sign of aggression like it is in coyotes, jackals and dingos.

African wild dogs are not the only animals that vote. Three screeching meerkats are much more likely to get their companions to move than two meerkats making equally loud vocalizations. Some bees reach a unanimous consensus before they travel to form a new hive. Many non-human primates, such as white-faced capuchin monkeys and mountain gorillas also grunt to indicate their preference for moving. No hanging chads here.

Jordan hopes this study and other research by the Botswana Predator Conservation Trust will help scientists understand how best to keep these animals away from local livestock—and their caretakers. There are less than 7,000 African wild dogs left in Africa, and their populations continue to decrease due to habitat fragmentation, diseases and people. “A major threat to large carnivores in general is human and animal conflict—they like to eat the same things as us,” says Jordan. “Convincing those animals not to go into the high risk areas requires speaking to them in a language that they understand.”