A tunnel collapsed at the Hanford nuclear waste site on Tuesday. Here’s what you need to know. 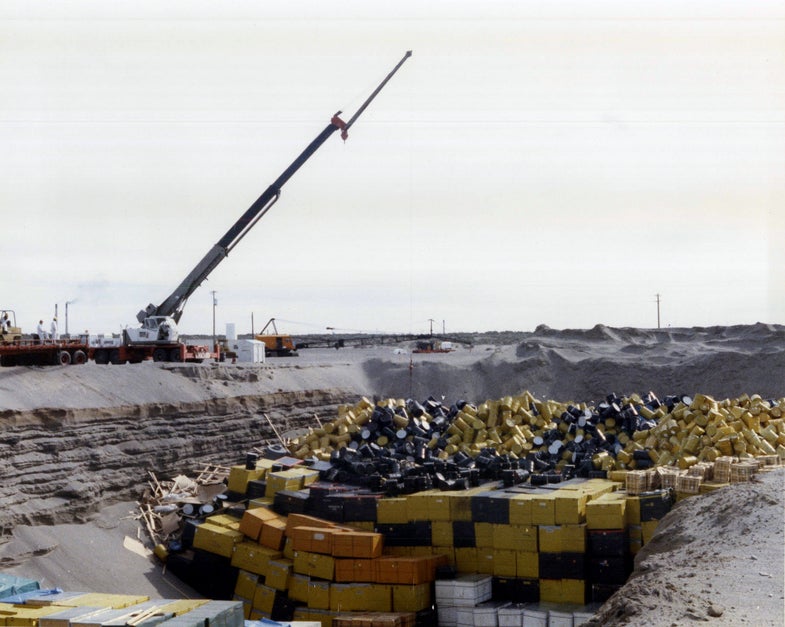 A photograph of the cleanup process at Hanford in 1991. The containers being buried contain low-level nuclear waste. NRC
SHARE

Yes, there was a tunnel collapse at a former nuclear processing facility on Tuesday. No, you don’t need to panic. Knowledge is power:

In 1943, the United States government bought out an area in Washington State as a site for the Manhattan Project. The Hanford site was used to produce material (including plutonium) for nuclear weapons during WWII and the Cold War. The old facility, now known as the Hanford Nuclear Reservation, occupies an area about half the size of Rhode Island.

The Plutonium Uranium Extraction Plant (or PUREX) was built in the early 1950’s and processed more than 70,000 tons of uranium fuel rods while it was operational, a number that the DOE says may dwarf the output of any other uranium-processing building on the planet.

What happened on May 9?

At 8:26 am local time, employees noticed and reported that some soil over a tunnel on the property sank by about 4 feet. Because the tunnel held nuclear waste, employees in the area were immediately asked to take precautions. For the six employees that noticed the initial sinking, that meant leaving the area. Employees in the nearby PUREX facility were asked to shelter in place.

Later, an inspection team discovered that a 20-foot section of the 100-foot-long tunnel had collapsed. At that time, all employees on the Hanford Site were asked to shelter in place as a precaution.

Spokespeople for the site have said multiple times that there were no injuries, all employees are accounted for, and there is no evidence of a radiological release.

What was stored in those tunnels?

There are two tunnels in the area. One is 360 feet long, the other is 1,170 feet long. The cave-in happened near the juncture of the two tunnels.

Starting in the 1950’s, the tunnels stored equipment like rail cars that had been used to transport fuel rods from nuclear reactors on the site to areas where they could be broken down and processed.

As with much of the removable nuclear waste on the Hanford site, the rail cars are slated to be “decontaminated, removed and permanently buried” according to the Hanford website. But authorities have also considered grouting them in place and burying them, which would be safest for human workers dealing with the area’s clean-up.

Is anyone in danger?

Residents in neighboring Benton and Franklin Counties are not being asked to take any action at this time.

Again, no injuries were reported, and so far, there is no indication that radioactive material has been released.

While a tunnel collapse at a nuclear site sounds terrifying, it doesn’t mean that there is any immediate danger. Unlike the glowing green goo that you might remember from Captain Planet, the nuclear waste in this case is pretty solid: rail cars don’t easily ooze. There has been no fire, flood, or explosion that would help spread nuclear material around.

A spokesperson from the Hanford joint information center says that an investigation into the incident is ongoing. Some crews are using handheld devices to check for excess radiation around the site. Closer to the site of the collapse, a Talon remotely operated surveying device—a robot with tank-like treads, a grabbing arm, and a camera—is helping crews investigate the scene from a safe distance of about 0.5 miles. The robot is similar to ones used to investigate after the Fukushima disaster and defuse IED’s.

(4) Transposing this news to another poison: “Tunnel in pesticide factory collapses; none spilled”. Important, diagnostic, ?, not ?.

But even if this isn’t an immediate threat, it’s not something we can simply shrug off, either. While radioactive rail cars don’t ooze, they’re still radioactive. That’s why workers have been trying to clean Hanford up since 1989, two years after it shut down. Nearly three decades on, there’s still a long way to go. 8,000 people work on the site, decontaminating and burying solid waste, turning liquid waste into solid, glass-like substances, and trying to contain the plumes of contaminated material that have already permeated some parts of the soil and groundwater. And despite the huge clean up effort there are worries about the site. As Maddie Stone at Gizmodo reports the site has has liquid nuclear waste stored in aging storage tanks, which is far more worrying than solid rail cars.

Figuring out how this collapse happened will be critical. If workers are burying nuclear waste as a safety measure, they want it to actually stay buried.

Where can I learn more about what’s going on?