Sea ice, before it’s too late

Stunning views of the imperiled Arctic. 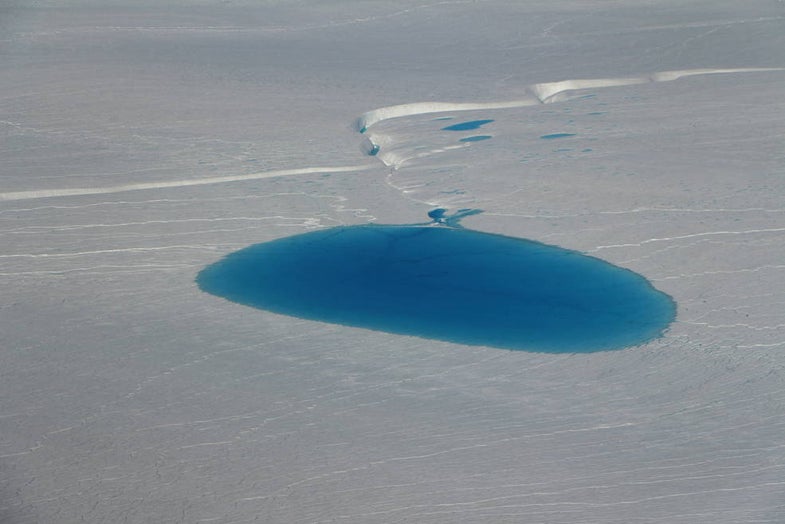 One of the dozen supraglacial lakes that Operation IceBridge surveyed to measure lake depth on July 19, 2017. NASA/John Sonntag
SHARE

There are 17 different kinds of ice, but perhaps none as precious as the ice located at our planet’s poles. Keeping an eye on that ice is NASA’s Operation IceBridge, the largest airborne survey of the Earth’s polar regions. At least twice a year (usually in the spring for the Arctic and the fall for Antarctica, the time of each pole’s respective spring) NASA flies a plane over the poles to record changes in the ice.

The project began in 2009 after NASA Ice, Cloud and Land Elevation Satellite (ICESat), an ice observing satellite similar to the European craft that helped us watch the Larsen C ice shelf break off of Antarctica earlier this month, stopped collecting data. The mission serves as a bridge (hence the name) to span the time gap until NASA’s ICESat2 is launched. That mission is slated for 2018.

NASA keeps a close watch on the polar ice, because it’s a bellwether of our climate. Arctic and Antarctic ice doesn’t just keep things cool locally. By reflecting the sun’s rays, it also helps to moderate our climate. If the poles melt, as they seem to be doing thanks to climate change, two things happen. First, the resultant surfaces become darker—dirt and rock aren’t bright like ice and snow—and thus absorb more sunlight. That speeds up warming, causing even more ice to melt. And as the ice melts, it also raises sea levels.

Operation Icebridge has launched two new shorter missions, one that began last week and another planned for the fall, to figure out what’s going on. The summer mission will include six four-hour-long flights focused on finding sea ice that has survive at least one summer. This multiyear sea ice used to be the bedrock of the Arctic. In the 1980s it accounted for as much as 70 percent of total winter Arctic sea ice extent, providing a surface for polar bears to hide in and to hunt from. But by 2012 it had dropped to less than 20 percent of the total.

This is a disturbing signal, because as the multi-year sea ice disappears, the ocean absorbs more heat—speeding up Arctic warming. And in fact, the Arctic has warmed at a rate nearly twice the global average. Although a recent study suggests that half the Arctic’s warming might be attributable to normal causes, if the study’s findings hold up, that would still mean the Arctic is warming at a rate 25 percent greater than the rest of the planet.

And as we lose polar ice, we don’t just lose a valuable ecosystem that creatures like polar bears and the Greenland shark depend upon for survival. As these most recent Operation Icebridge photos below show, we also lose a stunning, dynamic landscape.

From this afternoon's #IceBridge flight: Mt. Dundas and icebergs in North Star Bay on the approach to Thule Air Base. pic.twitter.com/KuNe8UIwlp

From today's #IceBridge flight: Close-up of an unnamed glacier in Greenland on the return back to Thule Air Base. pic.twitter.com/vq5AWRz3hp

From today's #IceBridge flight: NW flank of the Greenland Ice Sheet, where it
terminates at Inglefield Land, w Kane Basin in the background. pic.twitter.com/p4frgnBJGp