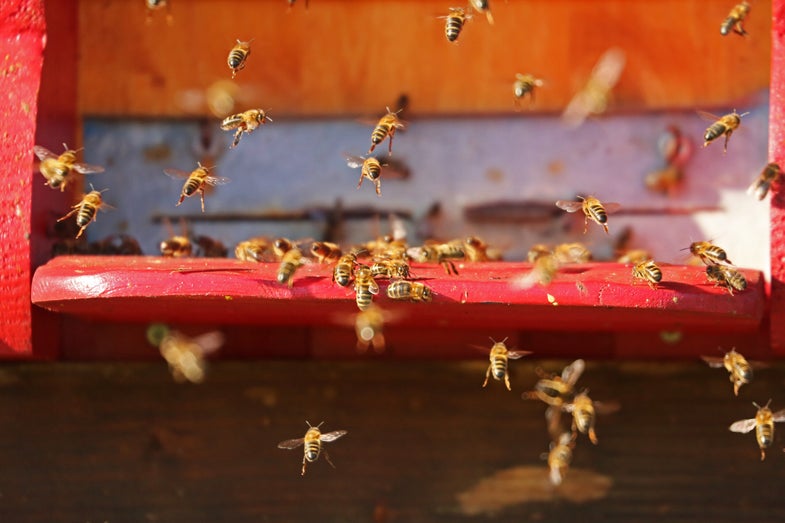 Aren't these little guys adorable? You don't need to hide from them. Pexels user Tookapic
SHARE

Prepare to see a bunch of grown men lying on the ground to avoid some bees.

At Thursday’s spring training game between the San Diego Padres and the Colorado Rockies, a bee cloud rolled through, temporarily stopping the game and making for some of the greatest baseball footage of all time (not counting the 2016 or 2004 ALCS/World Series). Watch for yourself:

Well this is something you don't see everyday ? pic.twitter.com/W9PEdHW8dK

That air is thick with bees, and yes, it looks terrifying. But it’s actually totally harmless. Bee swarms can contain thousands upon thousands of bees, each armed with a stinger, and yet they’re unlikely to bench you.

Bees only swarm when their hives get overcrowded, so really they’re just trying to find a new home. They’re like a group of schoolchildren being lead from one classroom to another—sure, the noise they make seem disproportionate the how tiny they are, and their appendages are upsettingly sticky, but they’re too preoccupied with each other to pay any attention to you. The queen bee guides some of her colony out of the hive and finds a new tree to build their home in. Hopefully.

Bees mostly swarm when it’s hot and sunny, which is why it’s happened at several spring training games over the years. Florida is a recipe for bee swarmin’ and baseball fields aren’t exactly no-fly (or no-bee?) zones.

The point is kind of moot now that spring training is over, but stadium operators needn’t worry anyway. Swarms can only survive for a few days on the honey they ate before leaving their nest, and they spend that time sending out scouts to find their new site. Not just one or two scouts—a hundred. These scouts fly out and investigate, then return to tell the rest of the colony what they found. Then they dance. Each scout performs her dance as a way to convince her hive that they should go to the site she picked. And then, like a beautiful bee democracy, they slowly come to a consensus. One by one, the bees stop dancing for their own spots and join another lady bee’s dance. When they’re all doing one, united dance, the colony flies off to their new home.

It’s all quite peaceful. Though if you’re a beekeeper, it can be a nuisance. If the goal is to keep honeybees in one spot (and it is), then having a third to a half of your colony up and fly away one day isn’t exactly helpful. So beekeepers with full hives have to trick their colonies into thinking that they’re not actually crowded. You can do that by rearranging the frames that make up an artificial beehive such that there are empty frames alternating with honey-filled ones. This tricks the bees into thinking that they don’t have enough stores to split the colony. Alternatively, you can just clip the queen’s wings so she can’t fly away. Her colony will still swarm, but without the queen they can’t get far. The swarm will stop nearby and can be easily recaptured in a box or—get this—in a bee vacuum. Bee vacuums are very real devices designed to suck bees into a big box using exactly the right amount of suction so as to not harm them.

So remember: the next time you see a swarm of bees, just stand peacefully in their midst. Worst case scenario? You wear a bee suit like Bryan Cranston in Malcolm in the Middle. No biggie.