Birds Can Sleep On The Wing, Sometimes 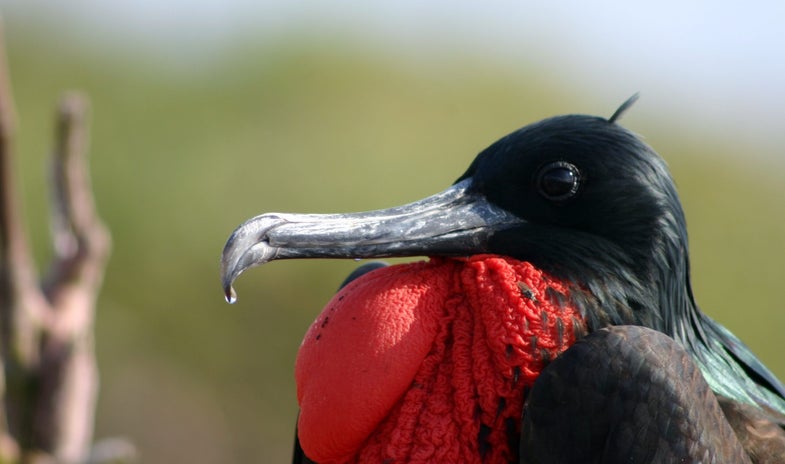 It has been long known that many species of birds fly non-stop for days, even weeks, but many scientists have wondered how they can withstand the time and distance without rest. Could everything from songbirds to sandpipers be sleeping while they fly?

A new study, published in the journal Nature Communications, found that one species, the greater frigatebird, can in fact sleep while they fly, but they don’t do it that often.

In the study, the group of international researchers attached electroencephalogram (EEG) recorders to frigatebirds before they went on their foraging voyages, trips that lasted up to 10 days of flying to get food.

The scientists knew that the birds don’t land often on the open ocean, as their long wings, poorly webbed feet and barely waterproof feathers make it hard for frigatebirds to take off from the water. They found instead that the birds continued to fly throughout the period, experiencing some sleep while flying.

Most of the sleep was a type called unihemispheric slow-wave sleep, which is when only one hemisphere of the brain sleeps at a time. They also found that the eye on the side of the awake brain remained open, which they hypothesize is to direct their flight.

Sleep on the wing

Great frigatebirds only slept for an average of 42 minutes a day while flying out from their homes in the Galápagos Islands.

But the birds only slept this way for tiny amounts of time. On average, the birds slept in flight 42 minutes a day with one hemisphere at a time. When the birds are on land, they sleep for 12 hours a day, in a full-brain, deeper sleep.

The scientists believe that these birds may only take short sleep sessions while flying: by natural selection it keeps searching for food at night, or at least keeps flying to the prime feeding spots. Short bouts of sleep are a sacrifice for vigilance.

However, the researchers admit that more research needs to be done to find out how many types of birds sleep, or don’t sleep, in this manner, and why.

“Why we, and many other animals, suffer dramatically from sleep loss whereas some birds are able to perform adaptively on far less sleep remains a mystery,” Niels Rattenborg from the Max Planck Institute for Ornithology in Seewiesen, Germany and lead author on the study, said in a press release.