Giant Squid Surfaces From The Deep In Japanese Harbor 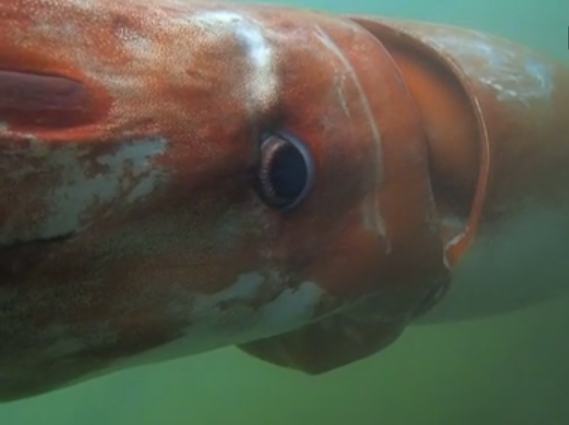 Japan, known for its famous fictional monsters, was paid a visit on Christmas Eve by a real-life sea monster. In Toyama Bay in Central Japan, visitors idling on a pier overlooking the water were greeted by a 12-foot-long red-and-white giant squid. Despite its massive size, this squid was believed to be a juvenile. Dead specimens have been measured as long as 43 feet.

Architeuthis dux, otherwise known as the giant squid spends its life in the abyssal depths of the open ocean. These gigantic, solitary predators feast upon other deep sea fish or squid and are themselves hunted by sperm whales in what must unfold into epic battles of giants in the blackness of the deep ocean.

They have been found dead washed up ashore or tangled in fishermen’s nets for centuries, but have only been captured on film alive twice before. In 2004, Japanese researchers snapped the first images of live giant squids that they had managed to lure up to their camera. In 2012, using the same technique, an expedition off the coast of Japan filmed live giant squid for the first time ever, wrangling with their iridescent lures thousands of feet below the surface of the ocean.

But the video of the Toyama Bay visitor is the most detailed and up-close viewing of a live giant squid yet. And certainly the first time a human being has ever been in the water with one of these creatures of the deep. CNN reports that the animal was filmed with a submersible camera, and joined in the water by Akinobu Kimura, a diver and owner of Diving Shop Kaiyu—an either bold or foolish move considering there was no way of knowing how a large predator unaccustomed to human interaction would react to his presence.

Kimura told CNN that “My curiosity was way bigger than fear, so I jumped into the water and got close to it.” He further described his experience by saying that the “squid was not damaged and looked lively, spurting ink and trying to entangle his tentacles around me. I guided the squid toward to the ocean, several hundred meters from the area it was found in, and it disappeared into the deep sea.”

The juvenile giant squid apparently moseyed around in the bay for a couple of hours before receding back into the deep.