Did Our Oldest Common Ancestor Live In Volcanic Hot Springs? 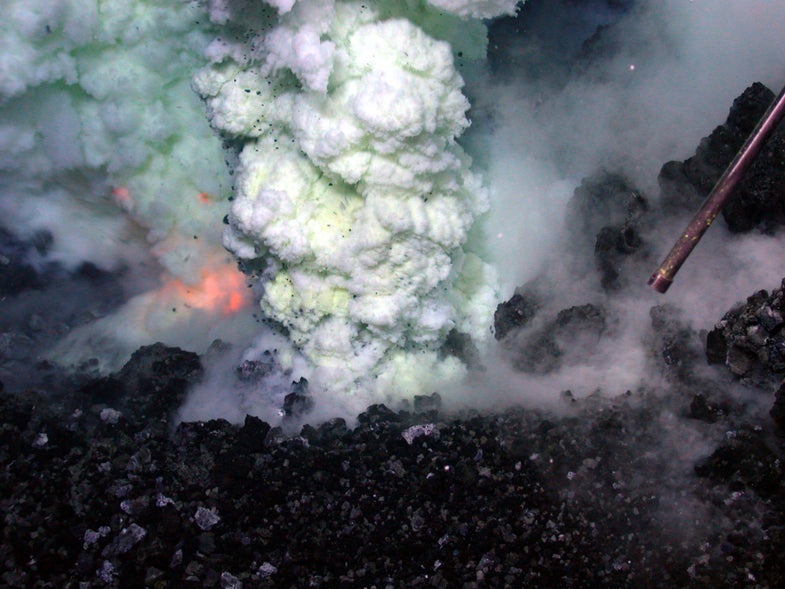 An eruption underwater. Volcanically active areas under the sea may have been the home of our last universal common ancestor (LUCA). NSF/NOAA
SHARE

Researchers are still trying to nail down the particulars of how life started on this planet. But now, we might just have a little better idea of what early life’s existence was like.

For years, scientists have speculated about what the last universal common ancestor (LUCA) of Bacteria and Archaea, two of the three major domains of life (Eukaryotes, which include animals and plants are believed to have branched off later), might have been like. Alas, there is no time machine to take us back in the past and check out what the ancestor of every bacterium, plant, fungi, and animal was like. But we can potentially come close using genetics.

That’s the idea behind a paper released today in Nature Microbiology. Researchers led by William Martin, an evolutionary biology at Heinrich Heine University in Düsseldorf, Germany, looked through 6.1 million protein encoding genes found in single celled organisms like Archaea and Bacteria. They identified 355 genes that might have been present in LUCA thanks to the evolutionary pathways taken by their descendants. Martin hoped to be able to infer from the nature of the genes what the organism’s life might have been like.

“I was flabbergasted at the result, I couldn’t believe it,” Martin told The New York Times. He found that LUCA probably lived in a hot, non-oxygenated environment, with plenty of minerals to eat. In other words, a very similar environment to a hot spring.

In an accompanying paper, biologist James McInerney writes: “When we look at the inferred metabolism of LUCA, we are looking at the dominant and most successful kind of metabolism on the planet before the Bacteria and Archaea diverged. This new study provides us with a very intriguing insight into life four billion years ago.”

This insight is still controversial. While Martin believes that LUCA may be an organism that is evolutionarily very close to the start of all life on the planet, as The New York Times notes, other researchers believe that life may have instead evolved first in shallow, sunlight pools, and that the genes that Martin identified belong to a more evolved creature –– potentially still our oldest common ancestor, but not the first life on Earth.