The Secret To Swimming Like A Jellyfish? Pull, Don’t Push 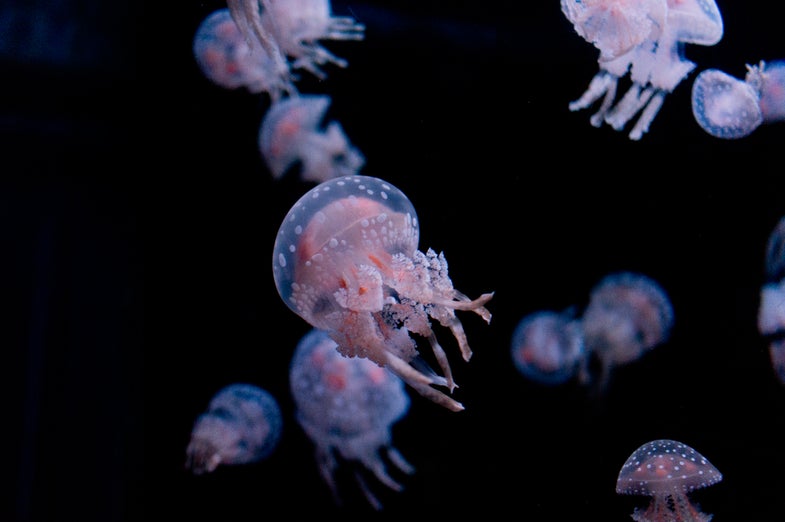 Jellyfish make swimming look so easy. The stinging, ephemeral beauties glide through the water in an utterly mesmerizing way.

In a study published last month in Nature Communications researchers found that the secret behind the easy swimming of jellyfish is suction. Instead of using its muscles to push water out of the way, a jellyfish moves its body to create an area of low pressure in the water around it. The difference in pressure creates suction, pulling the jellyfish through the water.

The characteristic is also shared by other organisms like lampreys. In this new study, researchers put jellyfish and lampreys in water seeded with minuscule glass beads (less than 10 microns across), which allowed the researchers to track areas of high and low pressure within the water tank. In the video below, you can see the movement of the lamprey creating an area of low pressure (in blue) around the animal.

Previously, many researchers assumed that jellyfish and lampreys moved through the water like most other animals, by pushing against the water with their bodies. In the paper, the authors write that “the implications of this new perspective on animal swimming potentially reach topics as diverse as evolutionary adaptation, functional ecology and bio-inspired design.”

Because jellyfish and lampreys use so much less energy to move through the water, the thought is that by mimicking their suction technique, we might be able to create highly efficient underwater robots and vehicles that can move smoothly through the water.