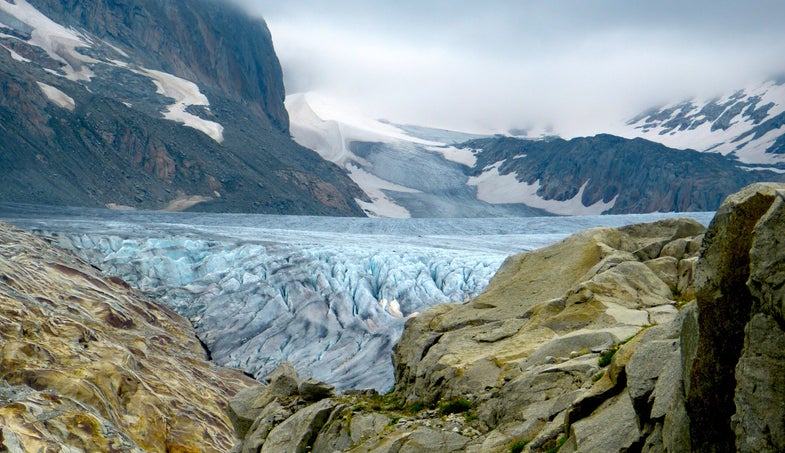 Glaciers in the European Alps are vanishing, transforming landscapes and leaving communities without an essential source of water. Scientists have a fix, but it won’t last forever.

Alpine winters bring snow and rain to fill streams and rivers. In the summer, when rainfall tapers off, melting glaciers feed waterways. Like most humans, glaciers gain weight over the holidays and lose that weight in the summer. In especially cool years they lose a little extra, and in especially hot years they gain a little more. Over time, losses and gains tend to even out, though global warming is changing that.

Rising temperatures have disrupted the cycle of growth and melt. Glaciers are now shedding ice faster than they can accumulate it. This is bad news for the Swiss Alps, sometimes known as ‘Europe’s water tower’. Shrinking glaciers will provide less water each year. And, because spring will arrive earlier as a result of climate change, glaciers will provide more water at the end of winter and less water during the summer, when it is needed most.

In a recent study, scientists proposed using dams to collect water from melting glaciers. Dams would store surplus runoff in the spring and save if for the summer. If engineers built dams large enough to hold a combined one cubic kilometer of water, that could save enough water to offset two-thirds of the summertime shortage expected with climate change.

In practice, this becomes more difficult. Switzerland’s 4,000 glaciers are disperse and many of them hard to reach. And, unfortunately, dams would only provide a temporary fix. They would merely addresses the seasonal shift in glacial melt and not the long-term disappearance of glaciers. For that, scientists will need to come up with a more permanent solution.