Why Do Seals Have Wavy Whiskers? 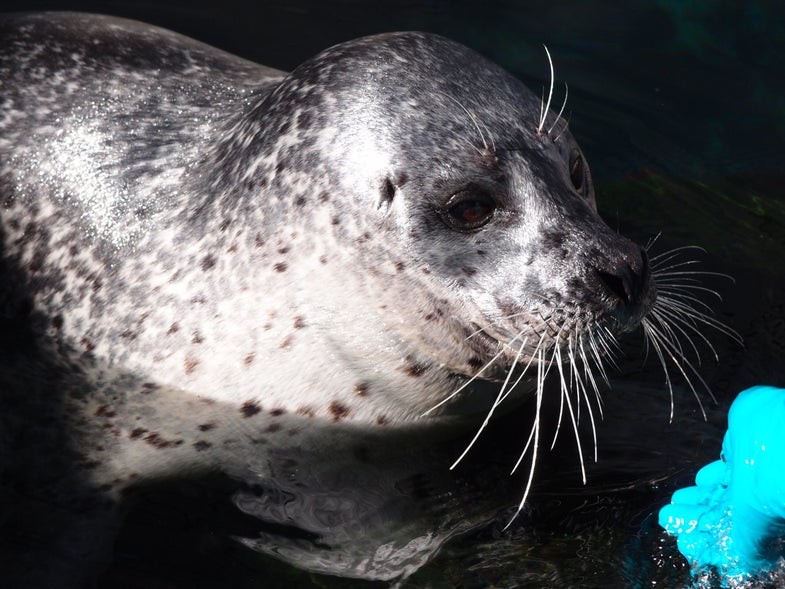 Almost all mammals grow whiskers. But all whiskers are not created equal. As great as George Clooney’s salt-and-pepper beard looks, the facial hairs of the harbor seal are even sexier. They enable the cunning predator to track its underwater prey from hundreds of feet away.

Now scientists have discovered the secret to those whiskers’ success: their shape. Unlike the smooth hairs that stick out from the cheeks of cats and dogs, seal whiskers are wavy. They bulge along their lengths, like pea pods.

“This shape enhances their ability to detect flows created by fish,” says Heather Beem, author of a study on seal whiskers soon to be published in the Journal of Fluid Mechanics.

Nature seems to have designed whiskers in different ways to serve different purposes. “Whiskers are likely to have many functions, from texture sensing to shape discrimination,” says Mitra Hartmann, a Northwestern University engineer who studies whiskers but was not involved in the new research.

Rats, for instance, use their smooth whiskers the same way that we use our fingertips: to detect the textures of objects. A rough surface brushing up against the hairs sets off different vibrations than a smooth surface.

For harbor seals, whiskers provide an astonishing sensitivity to slight ripples from a fish swimming by. In a previous study, seals blindfolded by German scientists and forced to wear headphones could still pick up the lingering trail of a fish, using their whiskers, half a minute after it had passed. That’s an especially useful ability for a predator that hunts its prey in murky waters difficult to see through.

The seals’ wavy whiskers are fairly unique, says Beem, who studied the whiskers as a graduate student at MIT. They’re found on only a few species of seal and on no sea lions or walruses.

To better understand how a whisker’s shape responds to ripples, Beem built an oversized plastic model of one. She then submerged her model at one end of a long tank of water and pushed it forward to simulate a whisker gliding forward on a swimming seal. Researcher Heather Beem tested two whisker models: one was wavy like a seal’s whisker, and the other was smooth.

A smooth whisker moving through water through would flap madly, like a car antenna in the wind. That’s because fluid flowing over a smooth object forms whirlpools. Those vortices would tug on a smooth hair, making it wiggle.

Wavy whiskers do not have this problem, the tank experiments showed. “The waviness breaks up the water flowing over it,” says Beem. A seal’s whisker can thus remain steady while in motion.

To see what happens when a whisker encounters ripples from a fish, Beem added a simulated fish to the other end of the tank–a large cylinder that moved forward ahead of the plastic whisker. Whirlpools shed in a regular rhythm by this fake fish traveled through the water and struck the faux whisker. Unlike a smooth whisker, the wavy whisker moved back and forth in time with the ripples. This tempo could in theory provide information to a seal about the speed or size of the fish creating the whirlpools, said Beem.

Hartmann calls the finding “intriguing.” But like any model, Beem’s single plastic whisker is a simplification of the real thing. Hartmann says she is curious to find out what happens when things get more complicated. How, for instance, might the massive head of the seal change the water flows and whisker behavior?

Inspired by her simple experiment, Beem has built a basic whisker sensor for detecting flows. She imagines one day mounting it on an aquatic robotic designed to track migrating schools of fish, or perhaps track flow patterns created by chemical spills.