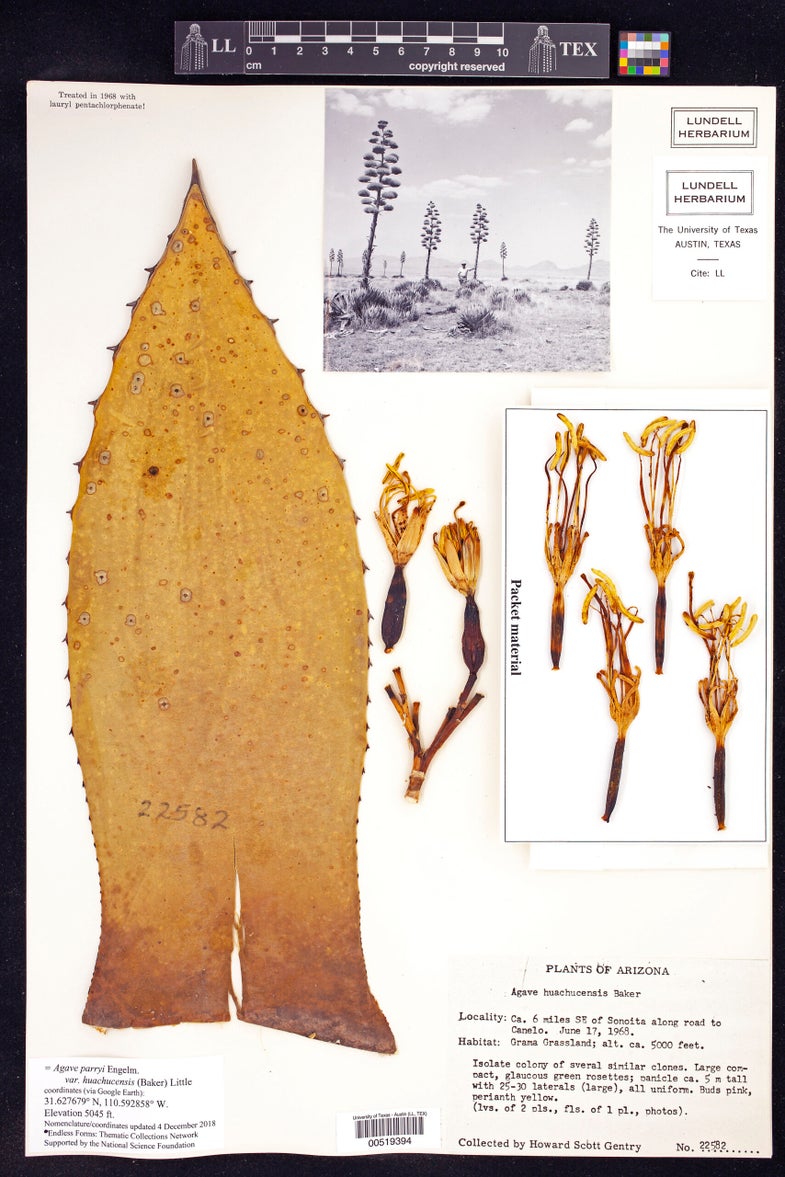 In 1859, Charles Darwin finally published his long-gestating theory of natural selection in On the Origin of Species. Famous for his descriptions of Galapagos turtles and birds’ ever-changing beaks, the English scientist concluded, “from so simple a beginning endless forms most beautiful and most wonderful have been, and are being, evolved.”

Fast forward almost 160 years, and that quote is serving as the inspiration for a new project to digitize intriguing and, in many cases, endangered plants. Called “Endless Forms,” the initiative brings together 17 research institutions in an effort to scan and share two million plant specimens over the next three years.

Matthew Pace, an orchid expert with the New York Botanical Garden, is one of the project coordinators. He says the digitization will focus on plants from 15 families, including succulents, carnivorous creatures, and epiphytes, which are organisms that grow on other plants. Though they differ remarkably from their living appearances, these botanical specimens find new ways to beguile the eye, even when packed tight and turned into 2D images.

More importantly, these images are one of the few assurances future generations of scientists can see and study what came before, as many of the featured plants are threatened by poaching, climate change, and other modern perils. That’s why no plant stands alone. Each one is photographed adjacent to a ruler for size, color target to ensure the exact right balance and exposure of the image, and a card detailing its provenance.

Here, from what seems like an endless selection of stills, are eight especially noteworthy forms:

“There’s still a lot we don’t know about plant body plans, and why plants look the way they do,” Pace says. “Even with something as iconic as the venus flytrap, we’re still trying to grapple with these basic questions.” S. botterii might help. The succulent epiphyte, found on tree branches and cliff sides, is thought to be one of the most primitive members of its genus, according to the California Academy of Sciences. 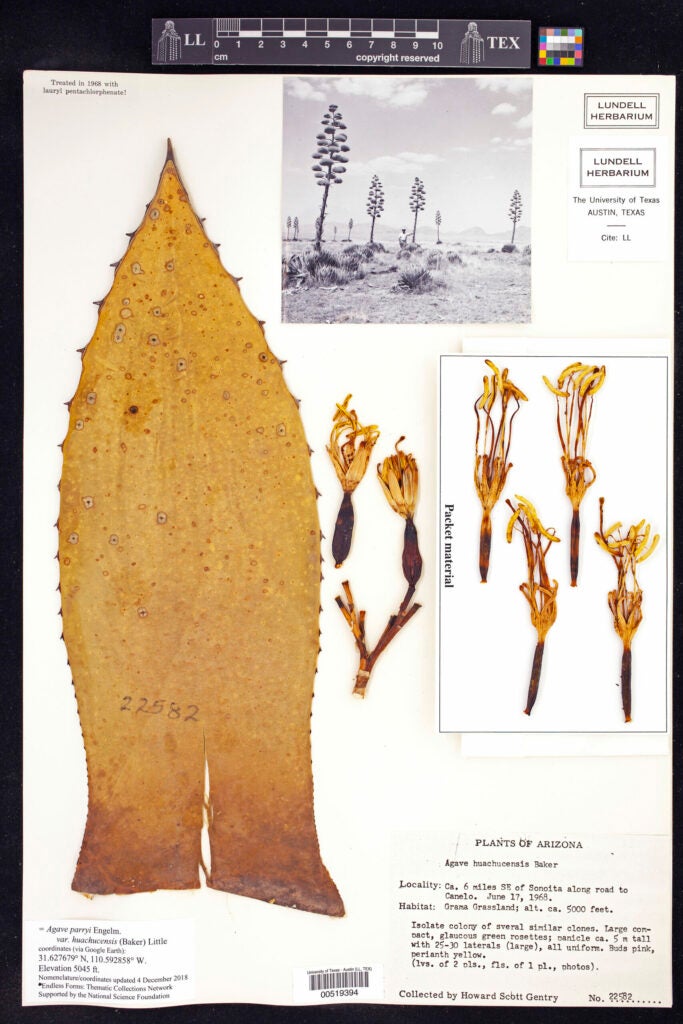 If you’re a true fan of agaves, you’ll know the name Howard Scott Gentry. An American botanist born in 1903, Gentry is famous (at least in certain circles) for his work documenting plant life in Mexico starting in the 1930s. This specimen, commonly called Parry’s agave or artichoke century plant, is one item in a “massive trove” of flora collected by Gentry, according to curators at UT Austin. In addition to the physical collections of broad leaves and little buds, Gentry also took photographs like the one seen here, and wrote down ethnobotanical observations about the relationship between people and the plants around them.

Also called the “devil’s potato root,” E. umbellatus is a twining vine indigenous to the Caribbean. The Academy of Natural Sciences of Drexel University has been using this and other specimens to research the evolution of plant chemistry. Some 200 years ago, members of this species showed signs of pyrrolizidine alkaloid toxins, which are still being researched in this and other contexts today. With careful preservation and digitization, scientists may be able to ask and answer similar questions in another two centuries.

First described in 1995 by Texas botanist Karen Clary, Y linearifolia has had a troubling two decades. Since this initial description, the plant, which grows only in small zones of Mexico’s Chihuahuan Desert, has been sought-after by illegal harvesters. “There’s a chance they could be used to facilitate poaching, so there’s a need for the community to define guidelines around this,” Pace says of the Endless Forms project. “When you’re dealing with really rare plants, that increases their wow factor. For someone to say, I’m the only person in the world who has this extremely rare plant in my collection, that’s a huge status symbol.”

This uniquely charismatic epiphyte is known in the United States as “Spanish moss.” It hangs from Southern live oaks and drapes over streetlights from Virginia to Florida and as far west as Texas. But it’s not moss, and it isn’t Spanish. Rather, it’s a globe-trotting perennial herb found in many a tropical climate; in French Polynesia, half a world away, it’s known as “grandpa’s beard.” Historically, it was more than mere decoration. According to this specimen’s keepers at the University of Wisconsin, the spindly stuff was used to fill car seats and mattresses, and even insulated homes.

Members of the Bromeliaceae family are easily identified by their spiky flowers. It may be hard to tell from this image, but the specimen seen here is a cousin of the pineapple. While we associate the golden fruit with Hawaii, P. cryptantha is thought to have emerged in the Andes mountain range. Such “alpine environments are among of the most imperiled regions on the planet,” according to botanists at Harvard University.

Perhaps the coolest part of S. purpurea is hidden deep inside: the carnivorous plant is lined with downward-pointing water-resistant hairs. When a tasty bug dips inside its flowery gullet, the insect is trapped and drowned in collected rainwater. The pitcher plant’s outsides are OK, too. Named for the Greek word “purpurea,” meaning purple-red, the sightly stems attract poachers, who sell uprooted individuals on the black market. Many states have conservation laws to protect it. Scientists with the “Endless Forms” project have elected to blur information on the origin of certain digitized specimens for similar reasons, hoping to safeguard other plants like it in the same area.

Known by the common name “Road Kill Cactus,” this nearly-spineless plant is found throughout the Caribbean and north into Florida, where it can grow up to 20 feet tall. Its name comes not from actual altercations with cars, but because its broad stems look squashed—like they’ve been recently run over. Populations of C. rubescens are currently stable, but the prickly plants could face a challenge down the road: “There’s some concern that plants that are extremely adapted to extreme environments—like cactus family, the poinsettia family—can be disrupted by changing circumstances,” Pace says.