Bats come in a dazzling array of shapes and sizes, representing some of the widest variation among all mammals —... 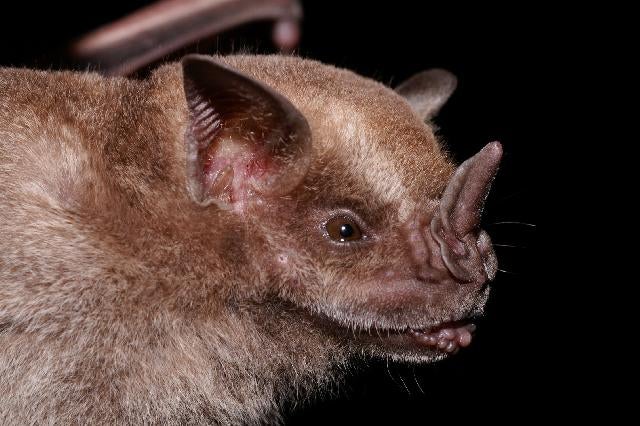 Bats come in a dazzling array of shapes and sizes, representing some of the widest variation among all mammals — most notably the New World leaf-nosed bats. These creatures, which when photographed often look drowsy and avuncular, are distinguished by horn-like appendages on their noses. These are called nose-leaves, and they modify the bats’ nasal echolocation calls. But the similarities across species mostly ends there.

Some nose-leaves are stubby and wide, while some shoot up unicorn-like. Some bats have flat, fleshy faces, while others have gracefully long snouts; some have beady little eyes and others have big almond eyes; some have rounded, smiley jaws and others have the scrunched-up visage of a bulldog, or a boxer who badly lost a fight.

They range in size from about an inch and a half to about six inches long, and they evolved to eat everything nature has to offer: insects, fruit, nectar, pollen, frogs, other bats, and most famously, blood.

They offer great examples of adaptive radiation in mammals — much like Darwin’s finches of the Galapagos, whose varied beaks offer a lovely view of natural selection at work. But Darwin didn’t have CT scans and CAD software.

Biologist Betsy Dumont does, and she is using it to unravel the evolutionary pressures involved in the bats’ explosive radiation. In a new paper, she and her colleagues combine engineering analysis with evolution to spell out how mechanical advantage, basically a bat’s ability to chomp, is a target of natural selection. It helps to think about this in terms of cats and dogs: Dogs with longer faces have fast-working jaws, but their mechanical advantage is lower than that of cats, which have short faces and ultra-strong bite forces.

This depicts a finite element analysis of the skull of a bat called Carollia perspicillata (left) and the engineering model of the same bat. FEM is an engineering technique developed to study how a system will respond to structural stress, and now it’s being used to study skull evolution.

Dumont and fellow scientists capture bats in mist nets, like gossamer volleyball nets strung across two poles in the rainforest. Biologists carefully pick up the stuck bats and get them to bite a small gizmo — “which is not difficult,” Dumont assures — to measure the force of their chomping.

“They’re small — the biggest ones are 100 grams, and we’re looking at ones that go up to 60 or 70 grams,” Dumont explains. “But they can still bite wicked hard because they have sharp teeth.”

In this study, the team wanted to figure out which biomechanical factors, if any, were behind the evolution of such crazy-looking bat faces and head shapes. They wanted to build engineering models that could simulate the forces of stress — in terms of the forces a structure can withstand — and mechanical advantage for any bat on the evolutionary tree, and any bat that could possibly exist, even if it doesn’t. They started with a CT scan of a bat and morphed it from there, creating models of any possible jaw lengths or widths. Then the biologists can find numerical values for stress and mechanical advantage among those models.

“To some extent, there is a tradeoff between the two. Nectar feeders have these really long faces, and they have lousy mechanical advantage but they’re also really highly stressed. At the other end of spectrum, animals with super short faces have excellent bite force, but are also kind of stressed,” Dumont says. “There is a sweet spot in the middle where most species are.” 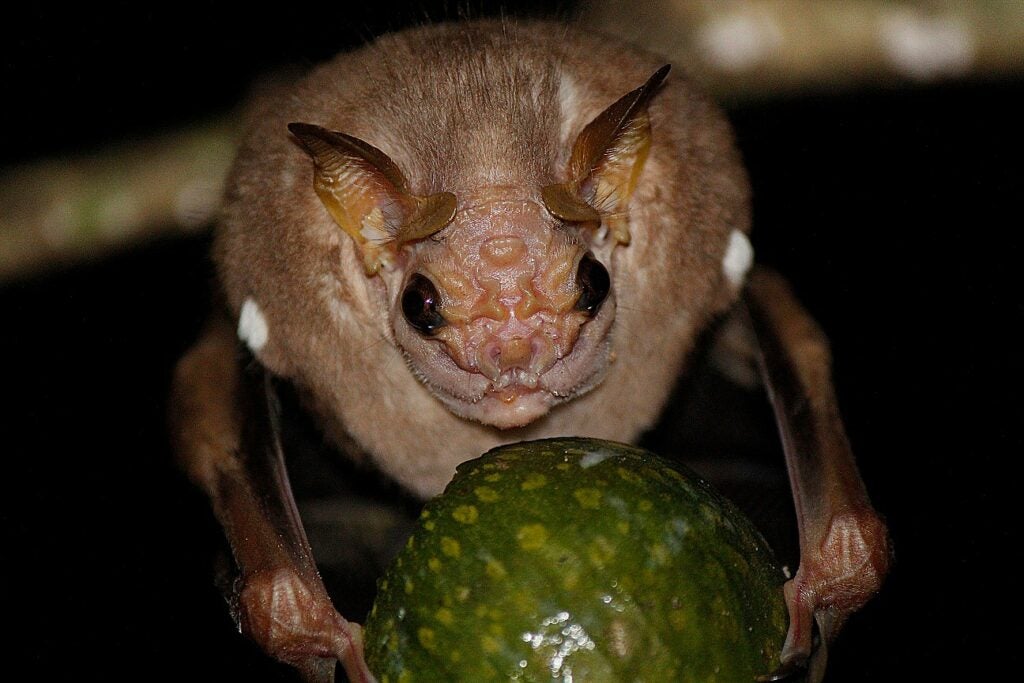 The wrinkle-faced bat Centurio senex generates the strongest bite known for any leaf-nosed bat. Here is one with a fruit prize.

It turns out natural selection has favored three basic bat shapes: Long and thin, short and wide, and “in between,” as Dumont puts it. Short, wide bat faces specialize in eating very hard fruits, like wild figs. Long, slender snouts fit nicely into deep flowers, where the nectar is. And of course there’s an outlier: Vampire bats, which are kind of “just weird.”

“They have relatively high mechanical advantage, and are sort of that in-between group where they’re maybe a little more stressed than that main group, less structurally sound,” Dumont says. They are also tricky to study, she adds: “They are just mean when you catch them. They know what their weapons are,” she says. “They pretend they are all stuck in the net and then they lunge at you with those horrible teeth.”

Aside from the outlier vampires, the findings illustrate that mechanical advantage was more important than structural strength in the evolution of these bat faces. And figuring out which biomechanical actions were under selection goes a long way toward explaining why bats have such endless, beautiful forms. 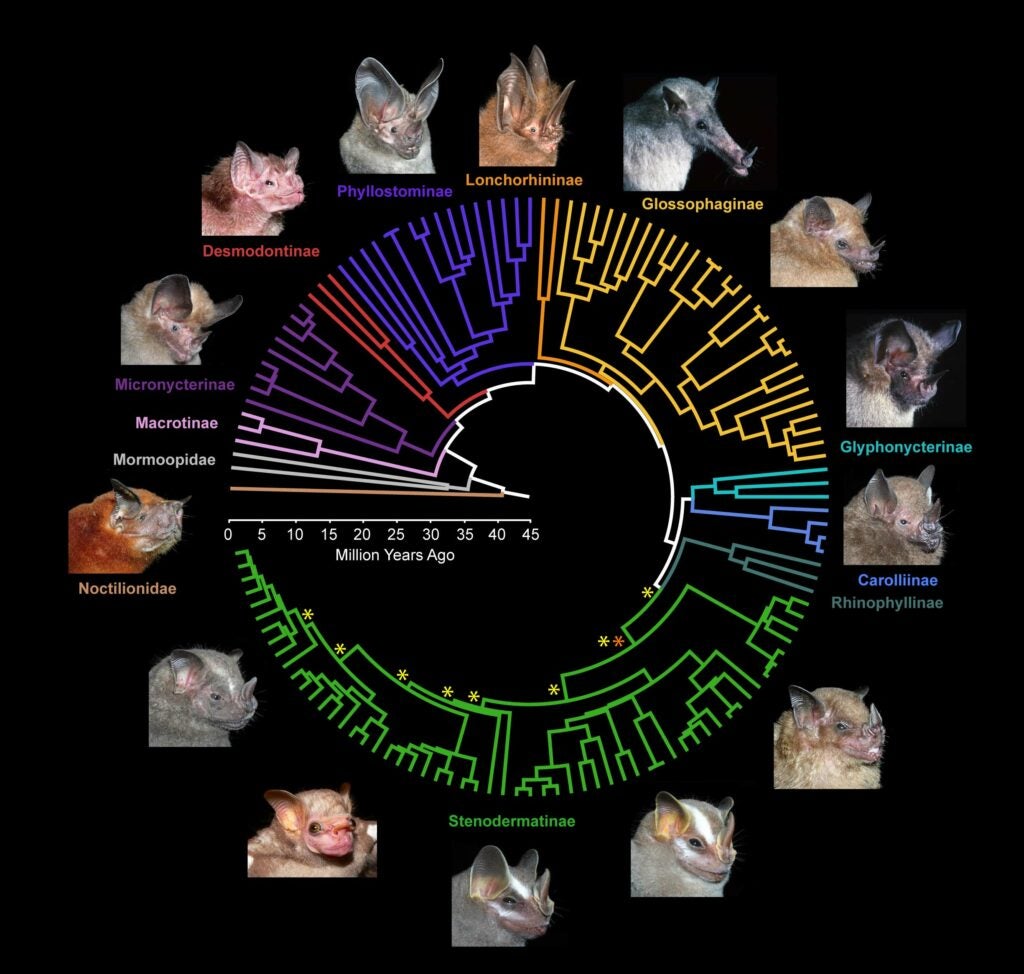 This diagram shows the extraordinary changes that have evolved among leaf-nosed bats in the New World across millions of years. The animals’ faces are specialized for the types of food they eat, including fruit, insects and other vertebrates.