Scientists are naming new species after musicians, and it’s kind of amazing

From Beyoncé to Shakira. 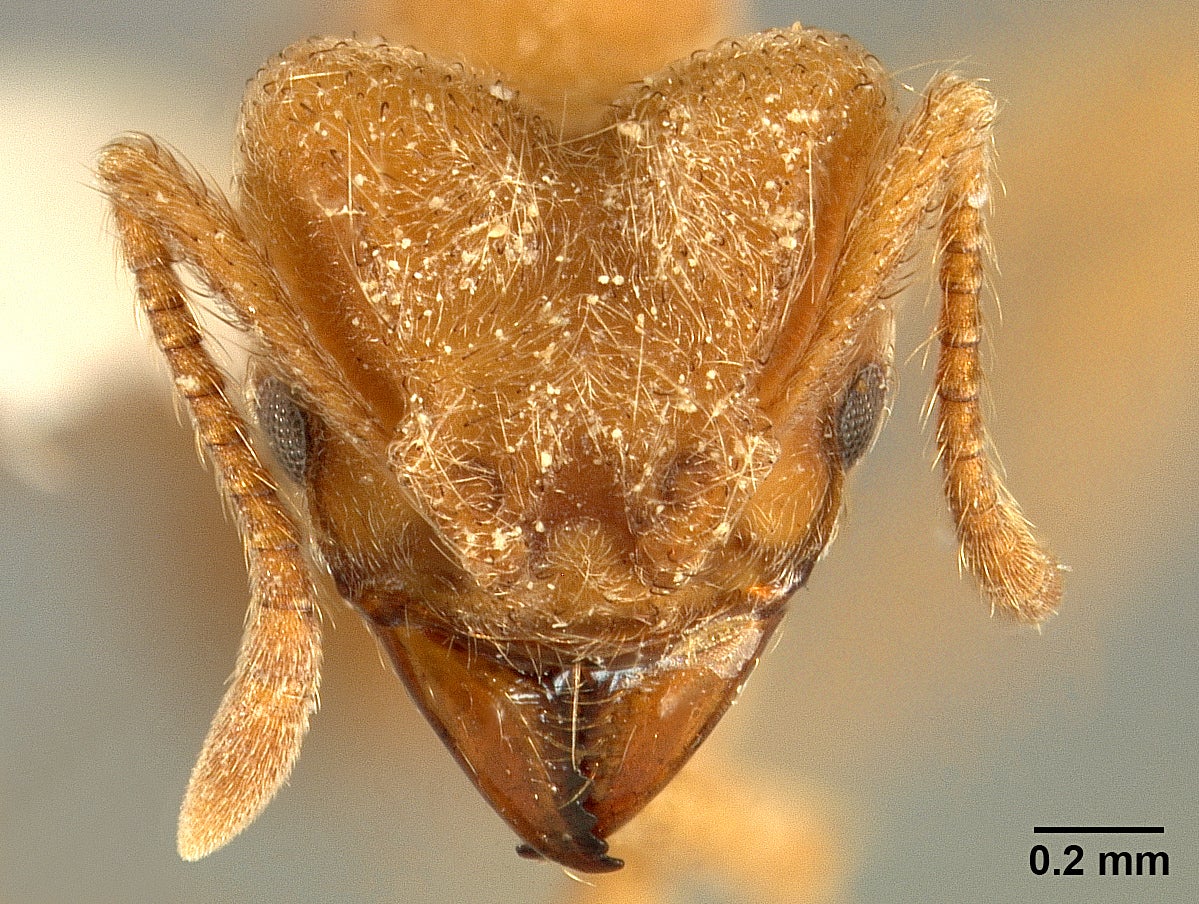 No one really knows how many species actually inhabit planet Earth—some say millions, others trillions—but regardless, it’s the job of taxonomists to name them all. Seriously, what the heck would you call an elephant—let alone these horrifying species living in the depths of the sea—if there were no system in place for naming them?

And now, a brief history lesson (it’ll be brief, promise!). Since the era of the Greek and Roman empires, taxonomists have tried (as best they can) to make sense of the world around them. Enter Swedish botanist Carl Linnaeus, who burst onto the scene in 1757, with his namesake hierarchy system. Finally, there was order. Over the centuries, the Linnaeus hierarchy has evolved, but for the most part, things have remained constant for scientists identifying new species. 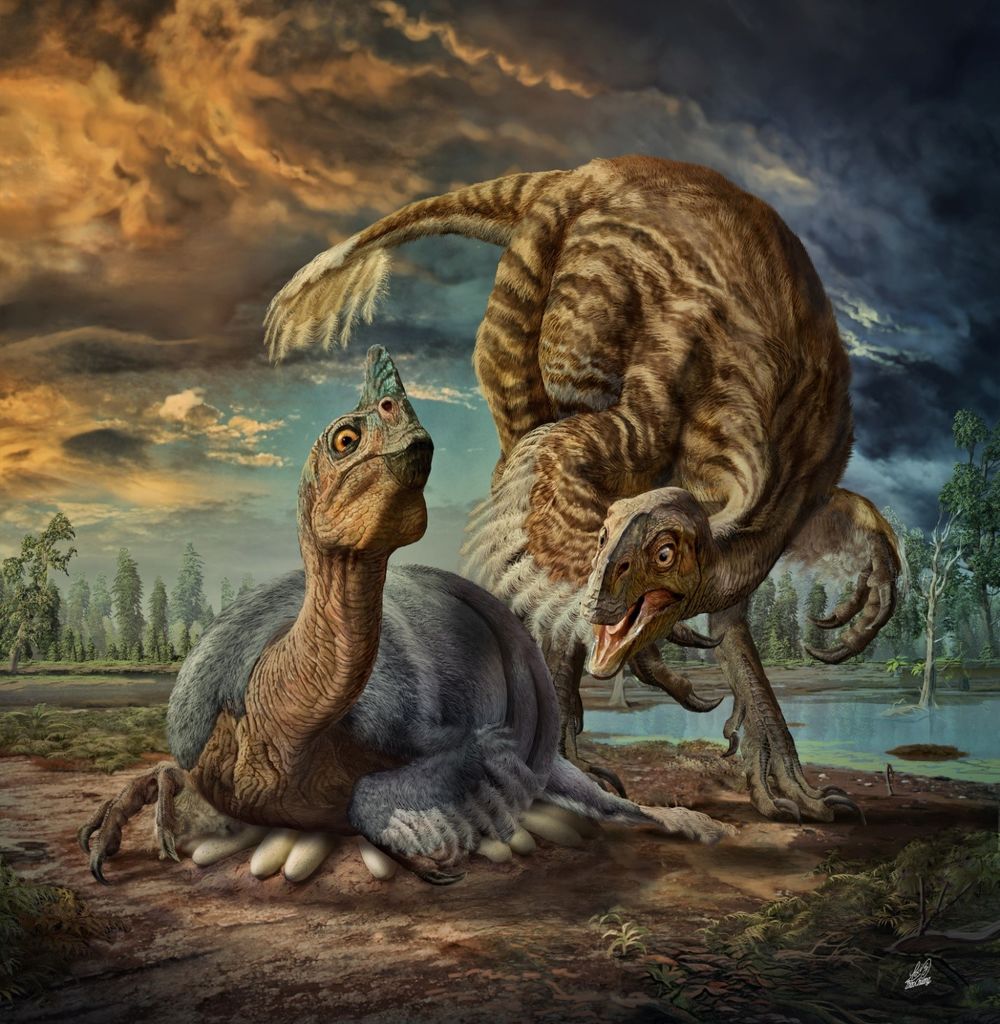 Once a scientist has identified a new species, they’re bound by the rules (known as nomenclature) of the Linnaeus hierarchy when it comes time to give that species a name. The two most important guidelines are:

While vague, this rule presents some interesting challenges (and creative opportunities) for taxonomists. Take the giant, feathered dinosaur above—known as Beibeilong sinensis—which translated means baby dragon from China. Because Chinese is not based on a Latin alphabet (and has zero Latin roots), Chinese scientists are often more deliberately creative when naming new species. And more recently, there’s been a trend towards naming species after musicians old and new, and it’s kind of amazing! For your viewing pleasure, here are a few of the rarest new species named after musicians.

Two scientists from the Smithsonian’s National Museum of Natural History named a new species of ant in the genus Sericomyrmex after the famous British band Radiohead in honor of the group’s music, as well as its environmental efforts. Ants of the genus Sericomyrmex – literally translated as “silky ants” – belong to the “fungus-farming ants,” a group of insects that have figured out how to farm their own food. This is particularly fascinating, considering ants perfected farming nearly 30 million years ago. 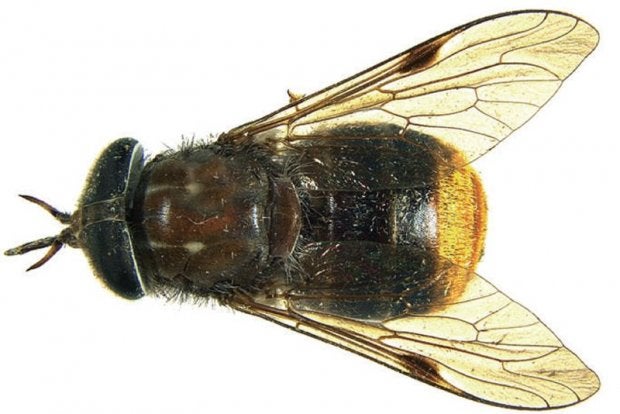 Scaptia (Plinthina) beyonceae is the “all-time diva of flies.”

First collected in Queensland, Australia in 1981—the year of our Queen Beyoncé—Scaptia (Plinthina) beyonceae was once considered a common pest, but was named after the famous singer in recognition of the unusual gold patch on its abdomen. According to Bryan Lessard, from Australia’s science agency CSIRO, “It was the unique dense golden hairs on the fly’s abdomen that led me to name this fly in honor of the performer Beyoncé as well as giving me the chance to demonstrate the fun side of taxonomy – the naming of species.” 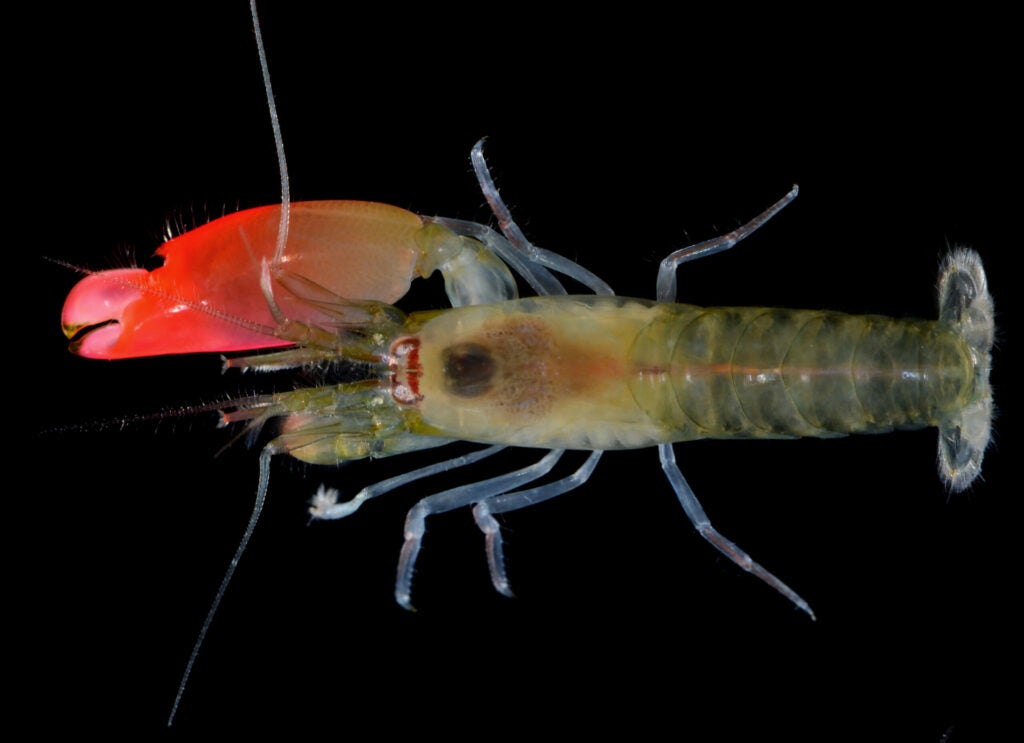 Synalpheus pinkfloydi is a newly discovered species of shrimp that kills with sound.

In April 2017, scientists Sammy De Grave, of the Oxford University Museum of Natural History in England, Arthur Anker of the Universidade Federal de Goiás in Brazil, and Kristin Hultgren of Washington’s Seattle University, deemed a new species of pistol shrimp as Synalpheus pinkfloydi. Pistol shrimps (aka snapping shrimps) generate substantial amounts of sonic energy by closing their enlarged claws at rapid speeds to create a high-pressure bubble. The resulting bubble implosion is one of the loudest sounds in the ocean, strong enough to stun a small fish—just like standing too close to an amp at a rock concert. “I have been listening to Floyd since The Wall was released in 1979, when I was 14 years old … The description of this new species of pistol shrimp was the perfect opportunity to finally give a nod to my favorite band,” said Oxford’s Sammy De Grave. 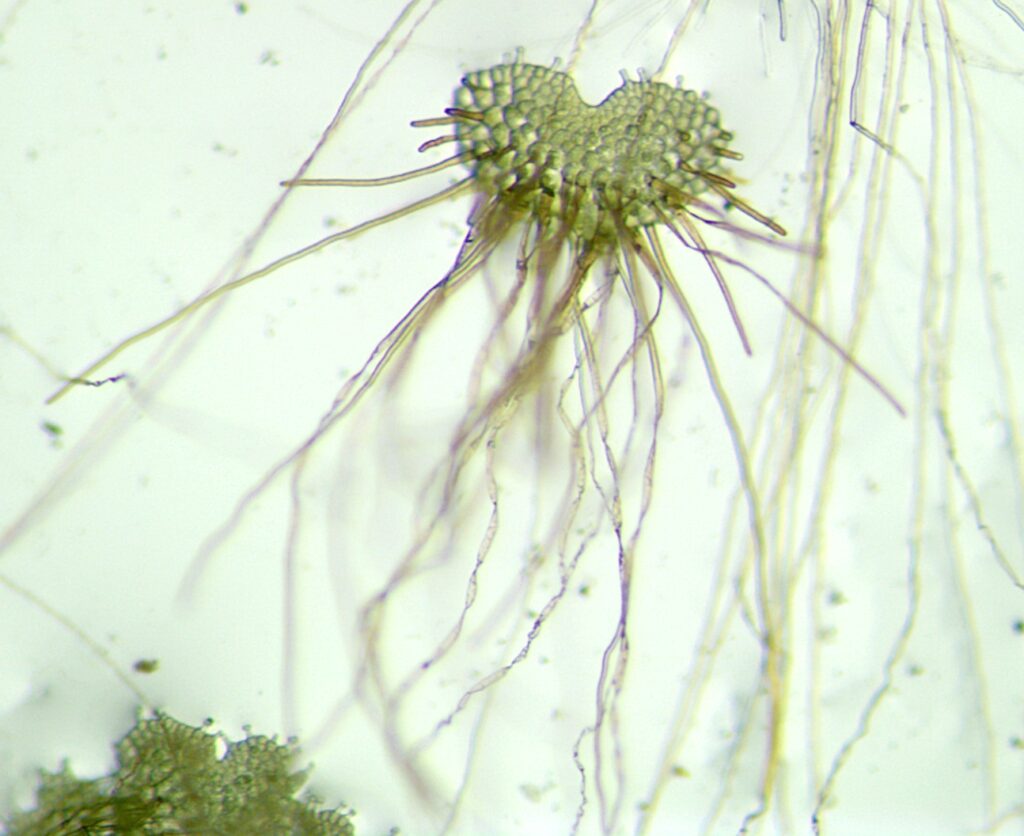 Forget a new species, an entire genus of ferns (found in Central and South America, Mexico, Arizona and Texas) have been named after Lady Gaga.

Naming a new species after your favorite musician is cool, but what happens when you stumble upon a group of ferns that bear a striking resemblance to Lady Gaga’s outlandish costumes? For Kathleen Pryer—a Duke University biology professor and director of the Duke Herbarium—”the ferns themselves gave us more reasons why it was a good choice,” she said. And when two new species of ferns—Gaga germanotta (named to honor the family of the artist) and Gaga monstraparva (named in honor of Gaga’s fans)—were being considered for a genus containing 17 similar fern species, Pryor’s trained eyes noticed how uncannily similar the bisexual reproductive stage of the ferns looked to the heart-shaped Armani Prive costume that Gaga wore to the 2010 Grammy Awards. In speaking with Duke Today, Pryer also noted that the way the fern extends its new leaves in a clenched little ball looked eerily like Gaga’s claw-like “paws up” salute to her fans. The deciding factor to name the whole genus after Gaga presented itself when Duke graduate student Fay-Wei Li scanned the DNA of the ferns being considered for the new genus, and found GAGA spelled out in the DNA base pairs as a signature that distinguishes this group of ferns from all others. Clearly they were fern this way! 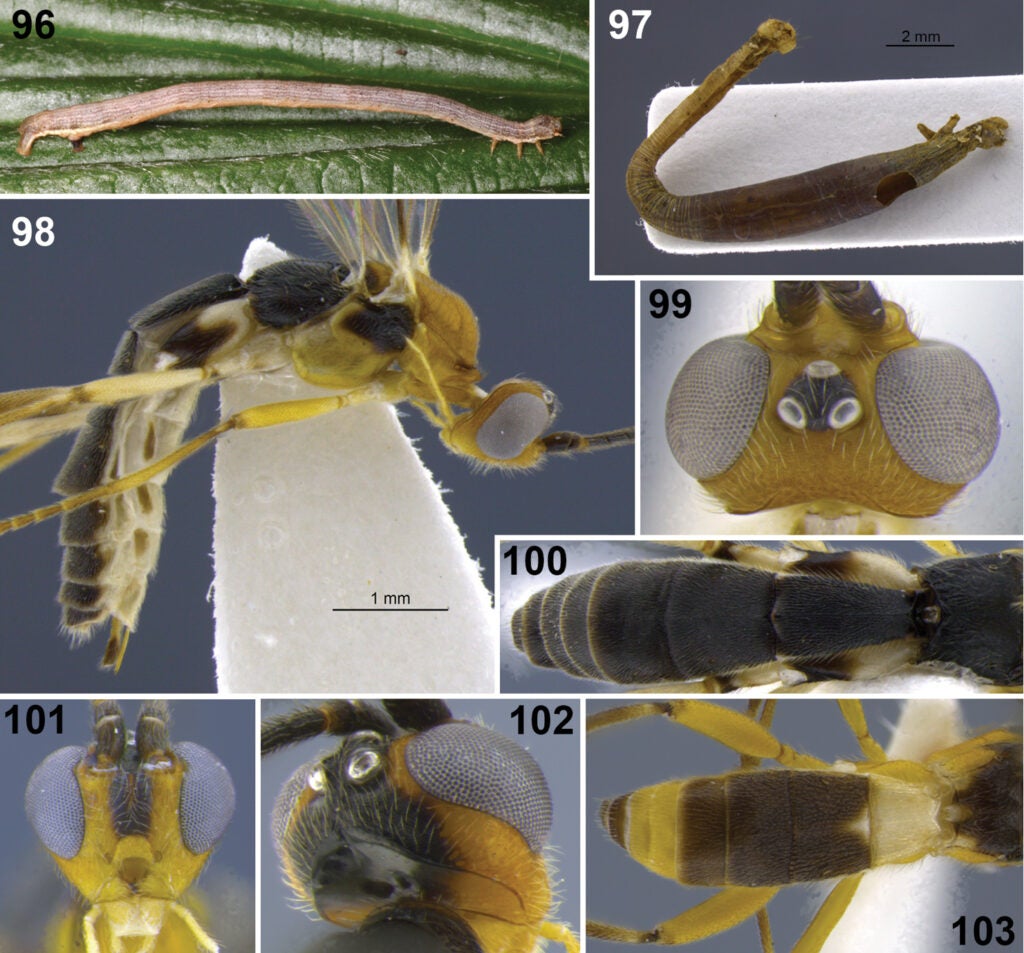 Aleiodes are very small wasps—only 4 to 9 millimeters in length—and they belong to a particularly rare subfamily of wasps that mummify the caterpillars on which they parasitize. Ready for the gory details? The adult female wasps inject an egg into a particular type of caterpillar. Once the egg hatches, the host caterpillar remains alive for a time while the wasp larva slowly eats its insides. Eventually, the caterpillar shrinks and dies, and the larva forms a cocoon inside the husk. But one key observation—made by Dr. Eduardo Shimbori and Dr. Scott Shaw—sets Aleiodes shakirae apart from the 23 other species in this subfamily of wasps: when the two scientists first encountered the Ecuadorian species, they noticed the host caterpillar shaking and wiggling as the wasp larva slowly ate its insides. The scientists were instantly reminded of Shakira’s dance moves. 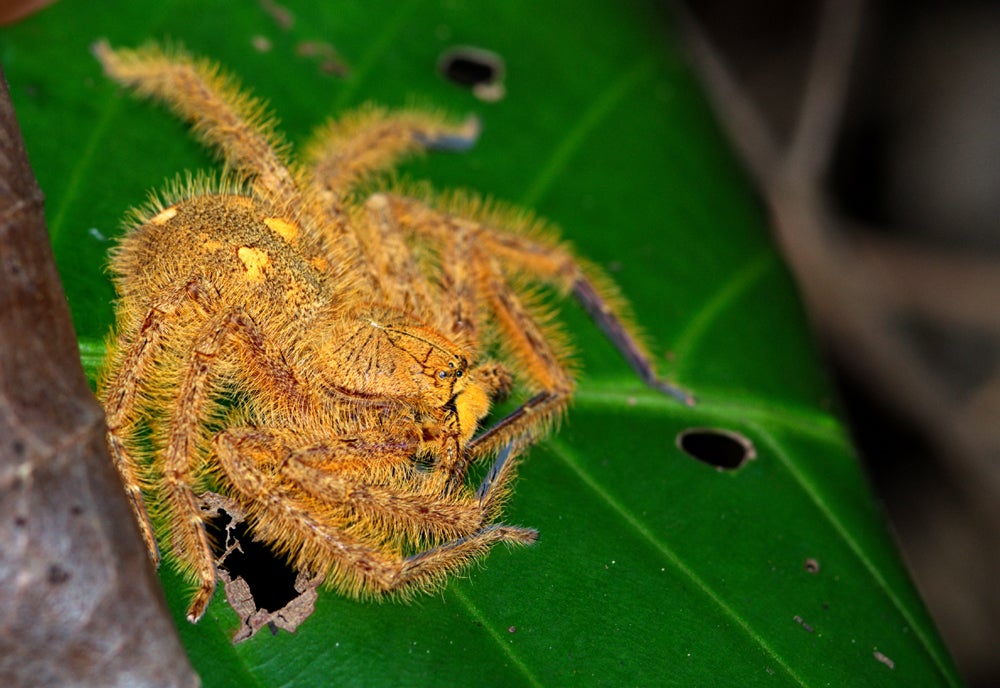 Say hello to Heteropoda davidbowie, the spider from Mars! If you look closely enough, its face looks similar to the painted face from David Bowie’s early career.

First described by Peter Jäger in 2008—based on a specimen collected by G. Ackermann in 2007 in the Cameron Highlands of peninsular Malaysia—Heteropoda davidbowie is a species of huntsman spider from the genus Heteropoda. Unlike the female members of the species, male “David Bowie spiders” have a reddish brown dorsum, and contain distinct brightly colored hairs, which form patches and lines. When viewed up close, the spider’s face is said to resemble the painted face from David Bowie’s early career.