The world's longest bony fish grows to more than 50 feet and is hardly ever seen alive. 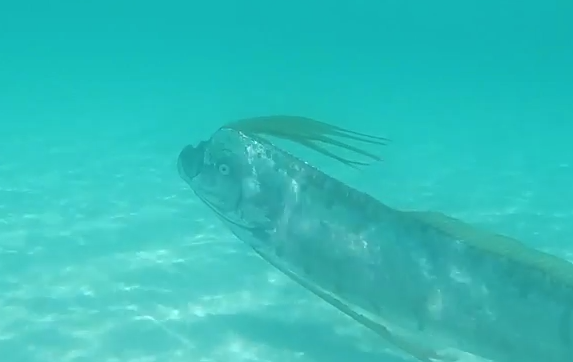 Behold the oarfish, the world’s longest bony fish. The beasts typically live hundreds of feet below the ocean surface and thus are rarely seen. Since 2002, however, a few videos (like the one above) have surfaced and given scientists important clues about the animals.

Most oarfish seen by humans are dead or dying on a beach. But a new video captured in March in Mexico’s Sea of Cortés shows two 15-foot-long oarfish–aka Regalecus glesne–gliding about in shallow water near the shore.

Oarfish are known for their lengthy dorsal fin, which they undulate to move about. They can also contort their whole body in a sinusoidal pattern for fast swimming. Their large size and swimming behavior has led historians to think oarfish might be the source of many “sea serpent” sightings in the past.

After watching this video, and seeing how weird they appear up-close–and with their fin sticking up out of the water at the beginning of the shot–I could see how an oarfish sighting could spin into a legendary story. (They have also been termed “king of herrings,” which is my new favorite name for them.) Oarfish can grow up to 56 feet (17 meters) in length, according to the Encyclopedia of Life, and usually eke out an existence 650 feet to 3,000 feet down.

The video was taken by people taking part in a trip organized by Chicago’s Shedd Aquarium and Un-Cruise Adventures.

If it doesn’t whet your appetite for oarfish footage, below is a clip captured in the Gulf of Mexico in August 2011.