Fruit Bats Have Sonar, Too 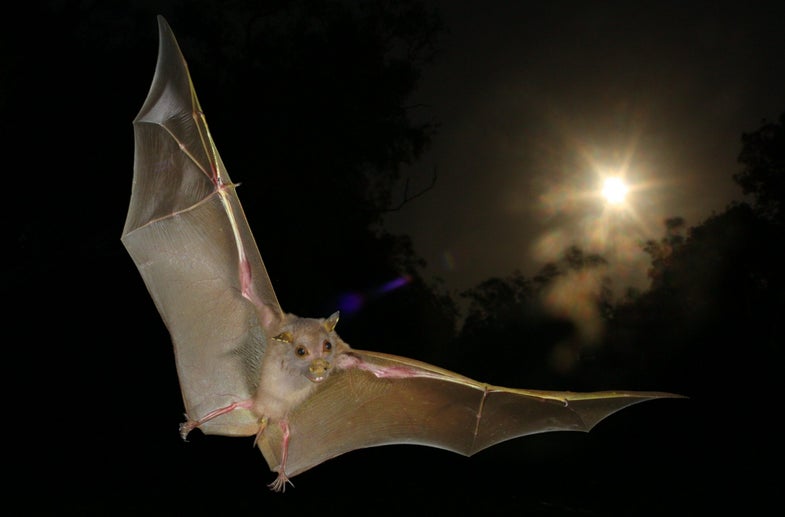 Although they fly like other bats and look like other bats, fruit bats lack the special biosonar that makes their smaller kin so unique. About 85 percent of the 1,200 known bat species emit ultrasonic chirps and clicks to hunt, but the other 15 percent, the megabats or “Old World fruit bats,” don’t do this. They don’t have any of the special adaptations it requires.

But fruit bats echolocate nonetheless, according to a new study. They just do it using their wings, not their lungs. While this rudimentary form of echolocation isn’t great, wing clicks help the bats distinguish big objects.

Yossi Yovel and Arjan Boonman of Tel Aviv University in Jerusalem recorded 19 individuals from three fruit bat species, listening for clicks while the bats flew in complete darkness and while they flew in light. Their clicks increased 3- to 5-fold in the dark, and they were able to find their way — but they weren’t very good at it.

To test the bats’ abilities, the researchers strung up some three-quarter inch diameter cables in a room; that’s about 100 times the thickness a microbat (a sonar-producing bat) could sense. The bats kept crashing into the cables. Then Yovel and Boonman tried a somewhat easier test, having the bats discriminate between a black board, which reflected sound well, and a think black sheet that reflected much less sound. The bats were supposed to land on the board, and they picked this up quickly enough that the researchers were satisfied they were using echolocation.

Scientists tried anything they could think of to stop the bats from clicking, including sealing the animals’ mouths, numbing their tongues and taping foam on their forearms.

“The ability of the bats to perform this task proves that they are capable of using biosonar to detect, localize, and discriminate large objects,” they write.

Yovel and Boonman were surprised that all the bats clicked, and that the clicks were produced by the wings, they say: “Arjan and I still find that hard to believe,” Yovel says in a news release.

To make extra sure they were getting it right, the researchers tried anything they could think of to stop the bats from clicking — including sealing the animals’ mouths, numbing their tongues and taping foam on the bats’ forearms. “But nothing stopped them from clicking, except for when we interfered with their wing flaps,” Yovel says.

They’re still not exactly sure how the bats make the clicks, but they hypothesize that it could involve two parts of one wing touching each other, a wing slapping the bat’s body, or snapping the wing’s bones. Birds have been observed doing these things, they note.

Why would big bats evolve this rudimentary capability? Wing-based echolocation may have similar roots to larynx-based echolocation: Finding your way in a dark cave. One species the researchers studied, the cave nectar bat (Eonycteris spelaea), often has to fly in complete darkness to reach its roost. This bat also had the highest wing-click rate. Another bat, the greater long-tongued fruit bat (Macroglossus sobrinus), lives in trees and flies slowly, so it has more time to look around and avoid a crash. It had lower click rates than the other bats in the study.

Scientists know echolocation has already evolved at least three times — in bats, toothed whales, and some birds — and maybe as many as five times, if you include tenrecs and shrews. But this study suggests it may have evolved more than once in bats alone, the largest group of mammals.

“Clicking fruit bats could be considered behavioral fossils, opening a window to study the evolution of echolocation,” the authors write.

The paper is published in Current Biology.