Scientists are pretty happy about this, for some reason. 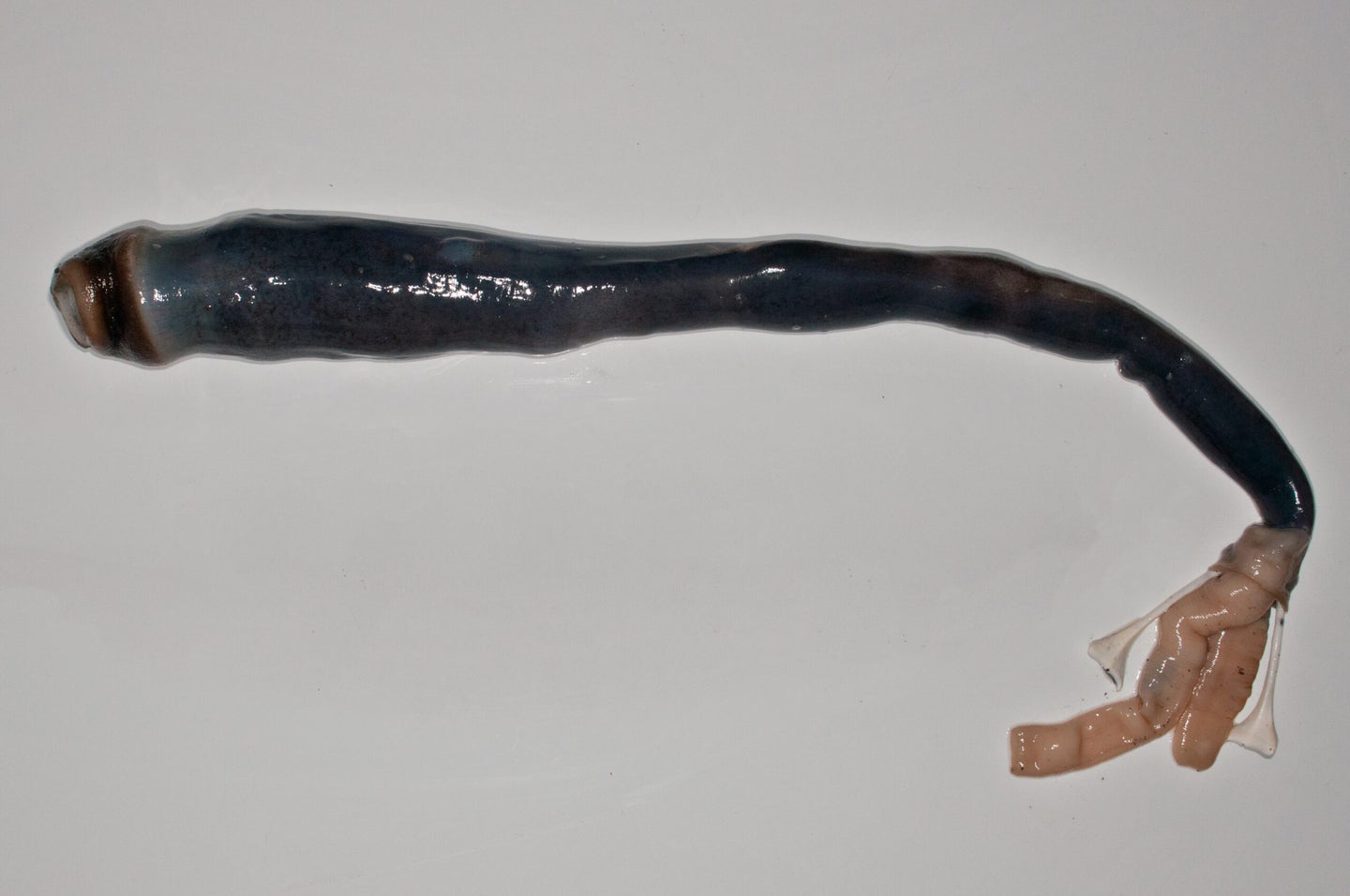 In watching the giant shipworm Kuphus polythalamia ooze out of its shell like Tim Burton’s idea of cake frosting, a few words might spring into your mind. “Science fiction plague,” perhaps, or “dear god, why have you forsaken us,” or “put that thing back where it came from, so help me.” But Margo Haygood, a research professor in medicinal chemistry at the University of Utah College of Pharmacy, gushes that the worm is “the prize, the unicorn” of the shipworm world.

“What a huge thrill,” Haygood says of her first encounter with a living specimen. “I mark that as one of the high points of my career.”

For hundreds of years, humans have known giant shipworms only by the magnificent shells they leave behind: often similar in size and shape to a baseball bat, they can grow to stunning heights. “I’m 5-foot-3 and I’ve seen shells taller than me,” Haygood says. “It’s really dramatic; dramatic is what it is.”

But now scientists have finally gotten their hands on living specimens, allowing them to study Kuphus polythalamia in all its goopy black glory. Their findings were published Monday in the Proceedings of the National Academy of Sciences.

The researchers, led by Northeastern University’s Daniel Distel, have adventurous eaters to thank for the discovery: previous efforts to track down living Kuphus polythalamia in areas where shells had historically been found proved fruitless. The scientists knew the worms had to be out there—in the Philippines, their tusk-like shells were sold at top dollar to collectors—but they couldn’t get their hands on them.

“Of course the shell collectors won’t tell you where they live, because it’s a trade secret,” Haygood says. “But we were just dying to find some.”

Then, by chance, one of the group’s collaborators happened to see a short documentary featuring the strange creatures. “It’s all in Tagalog, so I can’t really follow it,” Haygood says, “but it shows people collecting normal shipworms and eating them, and then this incredible animal sticking up out of the mud, and a whole lot of people cooking and eating those, too.”

That led researchers to a veritable Kuphus polythalamia paradise: the stinky lagoon of a long-abandoned log farm. Other species of shipworm (which, by the way, aren’t worms but mollusks) burrow into wooden detritus to feed. But Kuphus polythalamia prefers the mud. Or its bacteria do, anyway: Kuphus polythalamia seems to have given up on eating much of anything. Its digestive tract is stunted compared to its close cousins in the shipworm world, and its shell actually forms a hard cap over the end of the worm that burrows down into mud.

“There isn’t much of an opportunity for it to eat in the usual way,” Haygood says.

But Haygood and her colleagues saw one possible solution: the shipworm’s single, giant gill. It reminded them of the gills found on giant tube worms that feed off of hydrothermal vents with a bacterial assist. Inside the gill, an army of microbes chow down on hydrogen sulfide—the stinky off-gassing of a hydrothermal vent or some nutrient-rich swamp ooze—and produce carbon for the worm to live on.

Scientists have never been able to culture those deep-sea vent microbes in the lab, but Kuphus polythalamia‘s microbial buddies were more forthcoming. They’ve cultivated them in Petris dishes and plan on studying their behavior. “This is a big step forward for understanding those relationships,” Haygood says.

Researchers hope that shipworms and their microbes might reveal new sorts of antimicrobial substances or provide other industrial applications. But while Kuphus polythalamia may yet prove to be a useful slime monster, there are plenty of broad questions left to answer about the strange beast.

“This particular species fall square in the middle of the family, so we know it had to have a wood-eating ancestor,” Haygood explains. “Do they start out eating wood? We don’t know anything about their life cycle, or where we might find more populations of them. And we have no idea how old they are…are the specimens we studied a couple years old, or a couple hundred?”

The log farm that filled the lagoon with organic material didn’t exist until the 1970s, Haygood says, “but then again, for all we know the shipworms were there first.”

“Isn’t it remarkable that you can find such a bizarre creature in the 21st century?” Haygood sighs. “I think it just goes to show how little we know about life on our own planet. I’m in favor of investigating alien life, but we should put just as much effort into figuring out life down here.”