Video: Aesop-Inspired Study Shows Crows Can Be As Smart As Human Children

Crows can drop stones into water to raise the level and access floating treats. 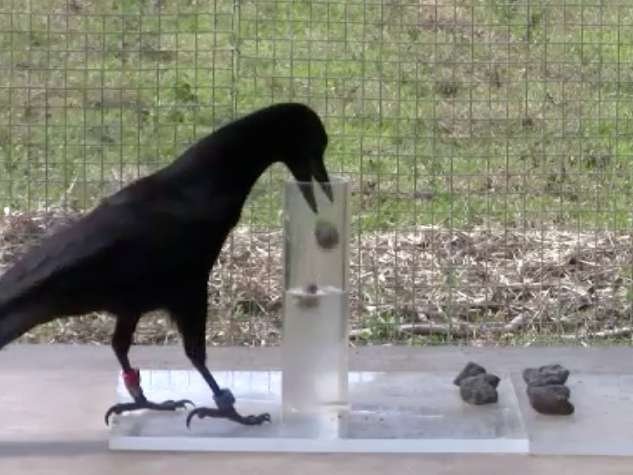 In Aesop’s fable of The Crow and The Pitcher, the thirsty feathered protagonist comes across a pitcher partially filled with water, but cannot reach the delicious liquid with its beak–it’s just out of reach. Being very clever, the crow drops stones into the pitcher until the water level rises and the crow can drink.

But this is no mere fable. Recent studies have shown that New Caledonian crows–native to islands in the southwest Pacific–actually are capable of similarly ingenious feats, and can drop stones into tubes of water to raise the water level and retrieve floating pieces of food.

But do they understand exactly what’s going on? In other words, do they grasp that the stones are capable of displacing water? In a study published this week in PLOS ONE, researchers designed a series of tests to find out, and they concluded that the crows “possess a sophisticated, but incomplete, understanding of the causal properties of displacement, rivaling that of 5–7-year-old children.”

To reach this conclusion, scientists first caught six wild New Caledonian crows (Corvus moneduloides), and trained them to drop rocks into tubes without water to receive a treat. They then presented the birds with a variety of tubes, some filled with water and others with sand, with treats just out of reach. They also gave them a variety of objects to drop. Here’s what they discovered:

“The results show the crows possess a sophisticated understanding of the causal properties of volume displacement, similar to that of five- to seven-year-old children,” study author Sarah Jelbert, from the University of Auckland, told ABC.

The study further shows what was already known to an extent: that New Caledonian crows are remarkably intelligent. They are, for example, the only non-human animals that fashion their own tools, making hooks out of twigs, something not even primates like chimpanzees can do.