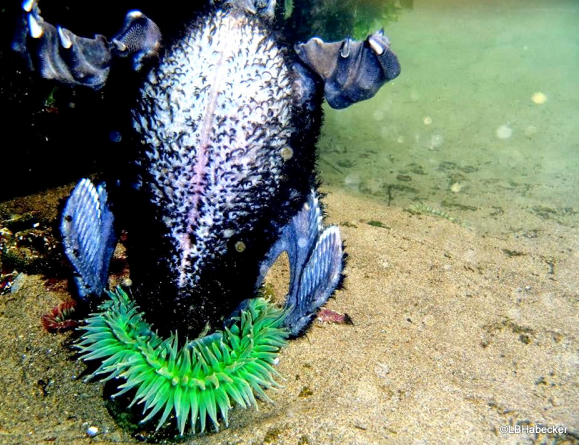 Giant green sea anemones can be found under the waves on rocky coasts from Alaska to Panama, shimmering a quite brilliant and unlikely green. They eat small fish, mussels, crabs, and sea urchins. They are basically immobile, and stick to small food items, befitting their small size, with a maximum diameter of about 10 inches. Imagine the surprise, then, when researcher Lisa Guy from Washington’s Joint Institute for the Study of the Atmosphere and Ocean and colleagues found one of these green guys eating a cormorant nestling, many times its size, in Cannon Beach, Orgeon.

It’s quite rare for invertebrates to eat seabirds (octopuses excepted–here’s an octopus eating a seagull), but this observation shows that the giant anemones (Anthopleura xanthogrammica) will certainly go for some bird if the opportunity arises. Bad-ass, if you ask me. Guy and colleagues just published a study in _Marine Ornithology _describing the find, and two other occasions when anemones were seen eating seabirds. In one case, an anemone engulfed an entire seagull chick, leaving only its feet sticking out. GULP. In the other example, some cnidarians were seen ingesting a gull leg.

It seems reasonable, then, that the anemones are likely to eat most any meaty morsel with which it happens to come into contact–that doesn’t swim or flap away. Although the scientists can’t be sure, the seabird was probably dead by the time the anemone got to it. Regardless, don’t go sticking your hand in giant green anemones–they will sting you, and then probably eat you. Albeit very slowly.

This find reminds me a bit of these “sheep-eating plants,” which are allegedly capable of trapping large animals, which then decay and provide the plants nutrients.