From the Renaissance to the present, the colors master painters choose to depict sunsets tell us what's in the air 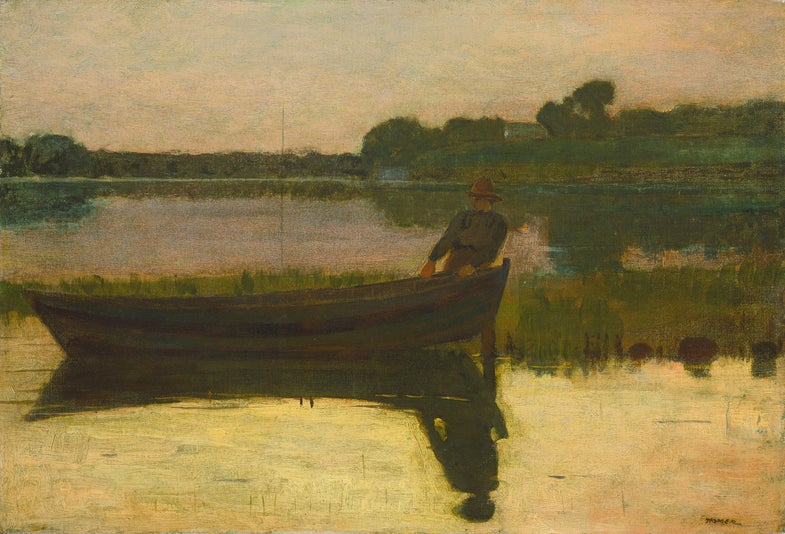 Environmental data is turning up in unexpected places. In the April issue of Popular Science, Katie Peek reports on one such source: the journals of Henry David Thoreau. The 19th-century naturalist and writer wrote down such detailed, comprehensive observations on the flora and fauna around him that a Boston University lab was able to chart the impacts of climate change — how much much earlier leaves appear, flowers bloom and birds migrate in the early 21st century compared to the Concord, Massachusetts of the mid-1800s — by comparing Thoreau’s notes to present-day conditions.

Visual art also carries a climate signal, it turns out. In a new study, scientists in Greece have verified that the relative intensities of red, blue, and green, or “red-to-green ratios,” in the paints mixed and used to depict sunsets by painters in the Northern Hemisphere, are excellent proxies for determining the levels of aerosols (fine dust particles or liquid droplets in the atmosphere) around the times that the paintings were created.

As part of their analysis, published March 25 in the journal Atmospheric Chemistry and Physics, the scientists set up an experiment in which major Greek landscape artist Panayiotis Tetsis painted sunsets during and after the passage of airborne particulates from Saharan dust storms over the Greek isle of Hydra. Tetsis just painted what he saw, with no knowledge about the dust storms, and his red-to-green ratios matched data on aerosol optical depth gathered by sun photometers at the same times and places. Put another way: The more particulates in the atmosphere, the more they absorbed certain spectra of light, changing the color of the sunset to the artist’s eye.

The team’s latest work builds on a 2007 study in which they analyzed the red-to-green ratio of 554 painted sunsets, created by artists between 1500 to 2000 before, during, and after volcanic eruptions. In that research, the scientists found that the color ratio (“only the parts of the sky over the field of view of the artist near the horizon avoiding clouds were analysed”) correlated closely with how the volcanic ejecta would affect the appearance of light traveling through the atmosphere, and how long that effect would take to taper off.

The red-to-green ratios in these works also document increasing atmospheric pollution since the beginning of the Industrial Revolution, from around 1850 through the 20th century.

Along with telling us a lot about the past atmosphere, this climate data embedded in the West’s fine art heritage may prove useful in refining the computer models that are used to study and predict the pace and effects of climate change.