Rating may help drive efforts to save some of Earth's most critically endangered (and weirdest) birds. 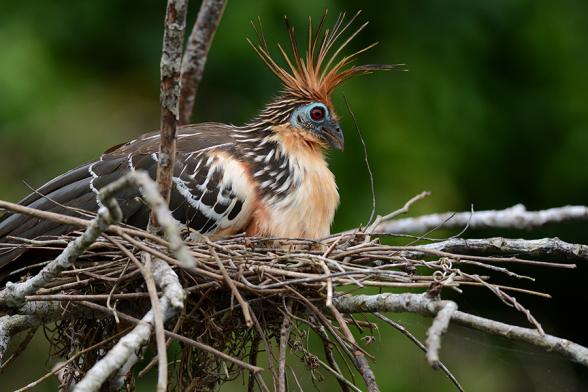 Is a bird more worth saving from extinction if it is evolutionarily unique, as well as physically rare? That’s one challenging question raised by newly published research that factors together the distinct evolutionary history of the world’s bird species, with how healthy their population numbers and prospects for survival are in the present.

Arne Mooers, a professor of biodiversity at Canada’s Simon Fraser University, and colleagues worked for seven years to assess how much evolutionary history a specific bird represents compared to other bird species currently alive. In order to do it, the team developed an evolutionary tree containing all 9,993 known bird species, says Mooers, and then calculated the total amount of time evolutionary processes “worked” to create those species: about 77 billion years. They then ranked the birds by how much of that work each accounted for. The species that top the list go back furthest in evolutionary history, and share that history with few or no living relatives.

The team calculated the total amount of time evolutionary processes “worked” to create those species: about 77 billion years.

The title of “most evolutionarily distinct” goes to the oilbird, a Central and South American species that alone accounts for 80 million years of avian evolutionary history, Mooers says. Its name derives from the layers of fat on oilbird chicks, which have historically been rendered for use as torches.

The average grackle or chickadee, by comparison, has so many close relations that they all “share” the same evolutionary effort.

The research also sets evolutionary distinctness against the International Union for Conservation of Nature (IUCN) Red List, ranking the 575 bird species considered threatened or endangered on that list by their unique evolutionary histories. The Giant Ibis tops the list by this reckoning, followed by the Kagu, the New Caledonian Owlet-nightjar, the Plains-wanderer, and the California Condor.

This information could help conservationists, natural resource managers, and policy-makers set priorities, says Mooers, when trying to figure out how to allocate resources to saving endangered bird species.

The team has also created a compound metric that sets a bird’s evolutionary uniqueness against how widely it can be found in the world. “Some species may be distinct, but they may be spread over a very large range, like the osprey, which has the widest range of any bird in the world,” says Mooers. “Or you could have something like a kiwi or a kakapo, which only lives in one place. You can think of that distinctness being concentrated in a very small place, for that species.”

The project took seven years to complete in part because when it started, there was no single overarching analysis, or evolutionary tree, of bird evolution. “It seems like we have a single perfect tree here,” says Mooers about the final result. “But there is no single perfect tree of birds. So we had to do this over, we had to create many millions of possible trees, and then take the average across those trees to get these metrics. Because there’s still a lot of uncertainty as to who’s related to who. We didn’t even have genetic data for every species.”

The project was risky enough by scientific standards, says Mooers, that the principal researchers opted to limit the potential for career damage. “We didn’t want to have any graduate students doing their PhDs on it, because we didn’t know if we could do it when we started. Nobody had attempted something this big, nobody had built a tree this big before. So we actually actively did not put any students on it.”

Mooers and team did the work in part to support the EDGE: Evolutionarily Distinct and Globally Endangered project. The project has already put the research to work with its list of “Top 100 EDGE Birds” that are at risk of extinction.

“There is a growing realization,” says Mooers, “that science has to start to become useful in the short term rather than the long term in this particular area because of the acute problems.”

Click here for a gallery of some of the world’s most evolutionarily unique birds, including some of the most endangered. 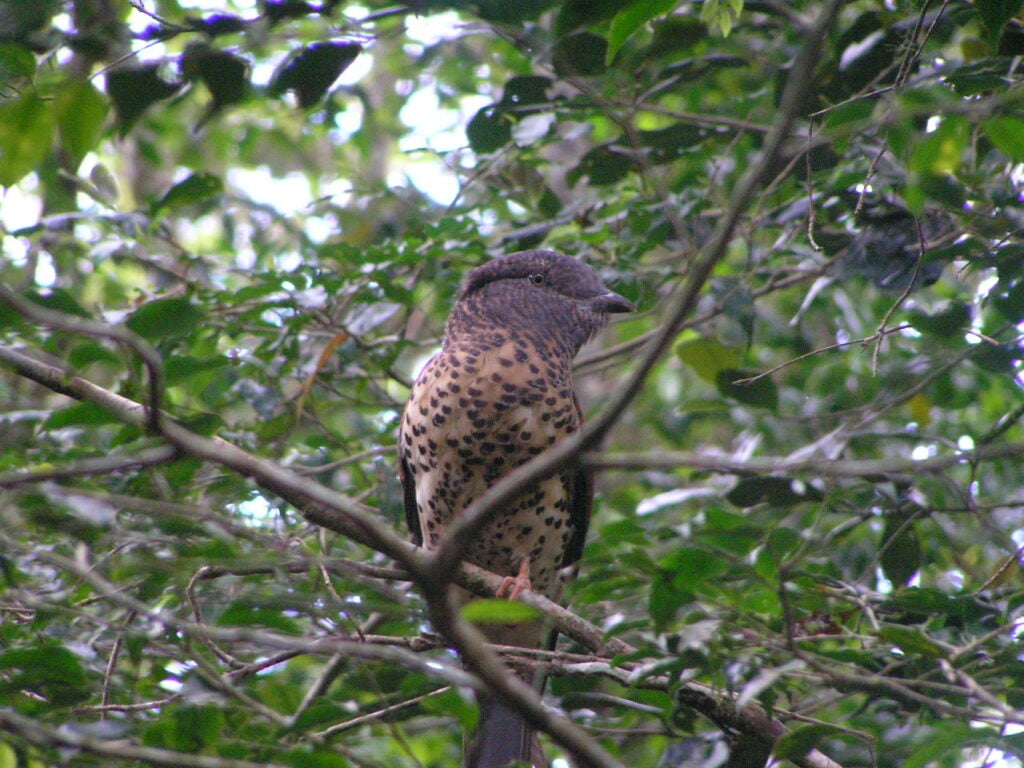 The Cuckoo-Roller (Leptosomus discolor) is the sole bird in the family Leptosomidae, order Coraciiformes. However, its DNA is distinct from other birds in the same order, like kingfishers and bee-eaters. Native to forests and wooded areas of Madagascar and the Comoro Islands, this bird is not threatened or endangered at present. 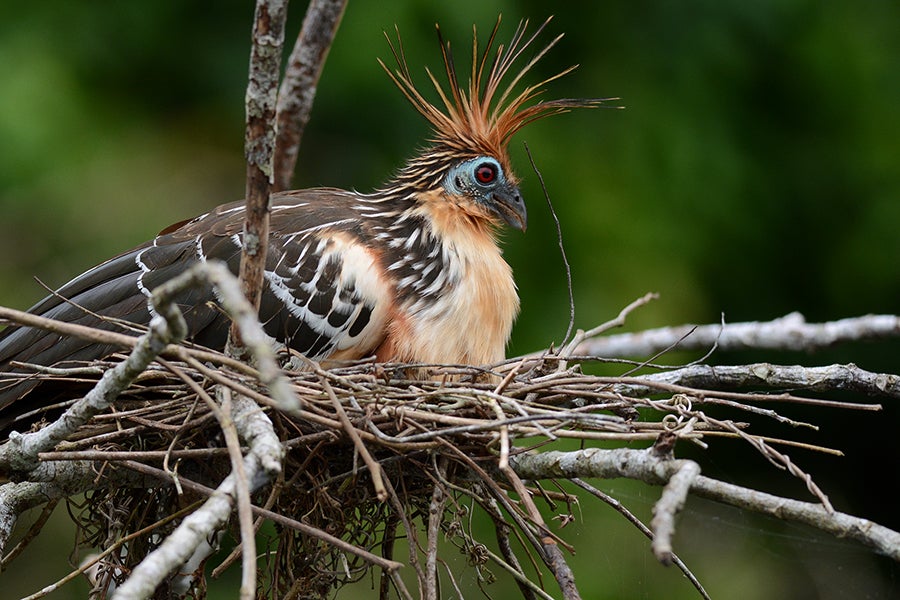 No less an authority than the Cornell Lab of Ornithology calls the Hoatzin (Opisthocomus hoazin) “bizarre.” Also called a stinkbird, the herbivorous Hoatzin’s digestion includes and extra large croup that ferments its food, allowing it to get nourishment from leaves. More strangeness: Hoatzin nestlings have claws on their wingtips, which they use to climb trees. Scientists have so far been unable to link the Hoatzin’s evolutionary history to other bird species, and so place it in its own order, the Opisthocomidae, and suborder, the Opisthocomi. The Hoatzin is native to mangroves, swamps, and marshy forestlands of South America’s Amazon rainforest and Orinoco delta. 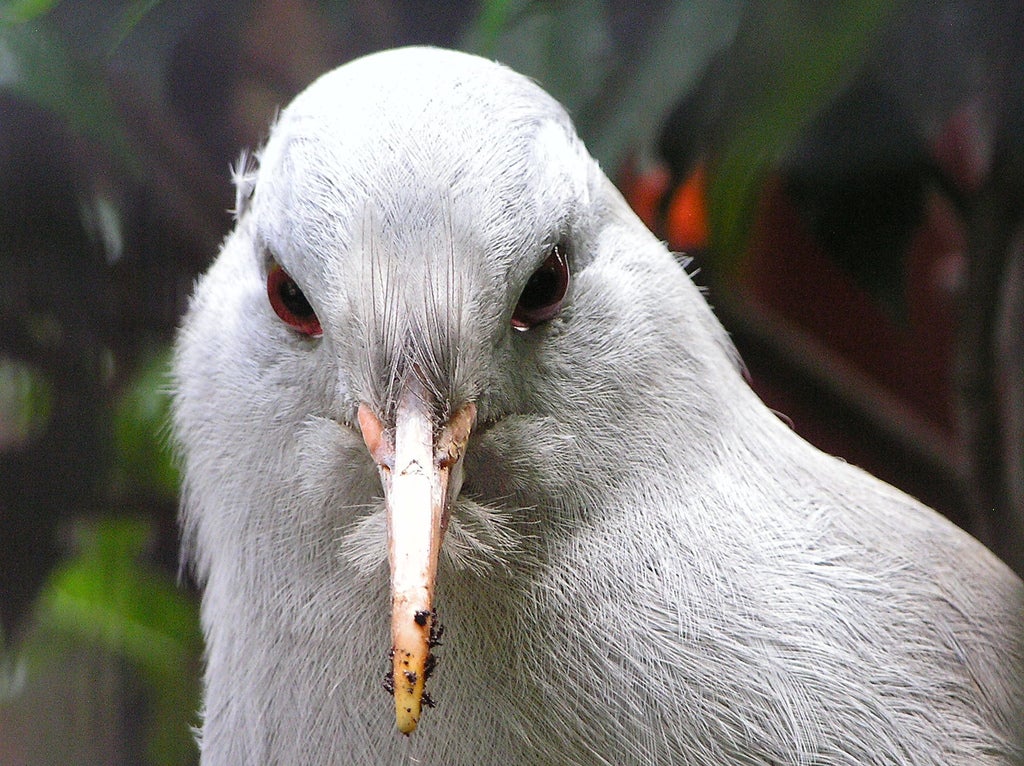 The Kagu (Rhynochetos jubatus) of New Caledonia is another bird with a contested taxonomy: Its closest relatives can be found only in the fossil record. It is the only known bird with corn kernel-shaped flaps over its nostrils. The Kagu possesses special feathers, called powder downs, that help it stay clean and waterproof in its rainforest habitat. Ground-dwelling and flightless, the Kagu is especially vulnerable to non-native predators: The species is listed as “endangered” by on the IUCN Red List. 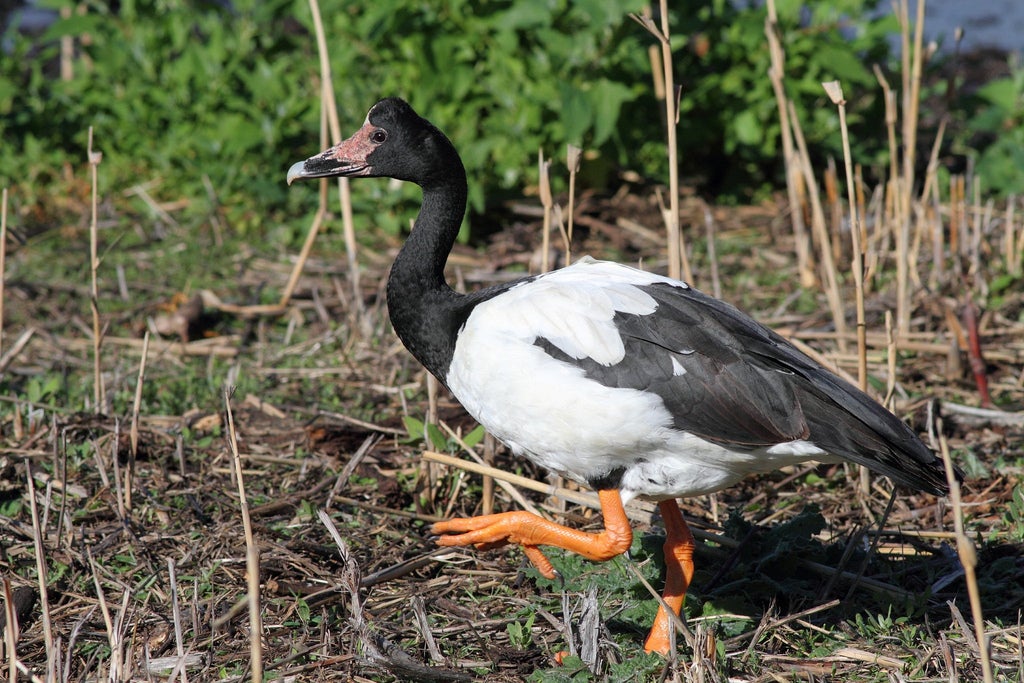 The Magpie Goose (Anseranas semipalmata) lives in swamps and on flood plains of Australia and Papua New Guinea. This waterbird is something of a living fossil, because its closest known relatives diverged from all contemporary ducks, geese, and swans about 67 million years ago. Despite the name, Magpie geese differ significantly from true geese: they have a gradual moulting period, and are always able to fly; their unusually long toes are unwebbed, allowing them to perch high up in trees; and this species is the only waterfowl with a breeding group composed of one male and two females. 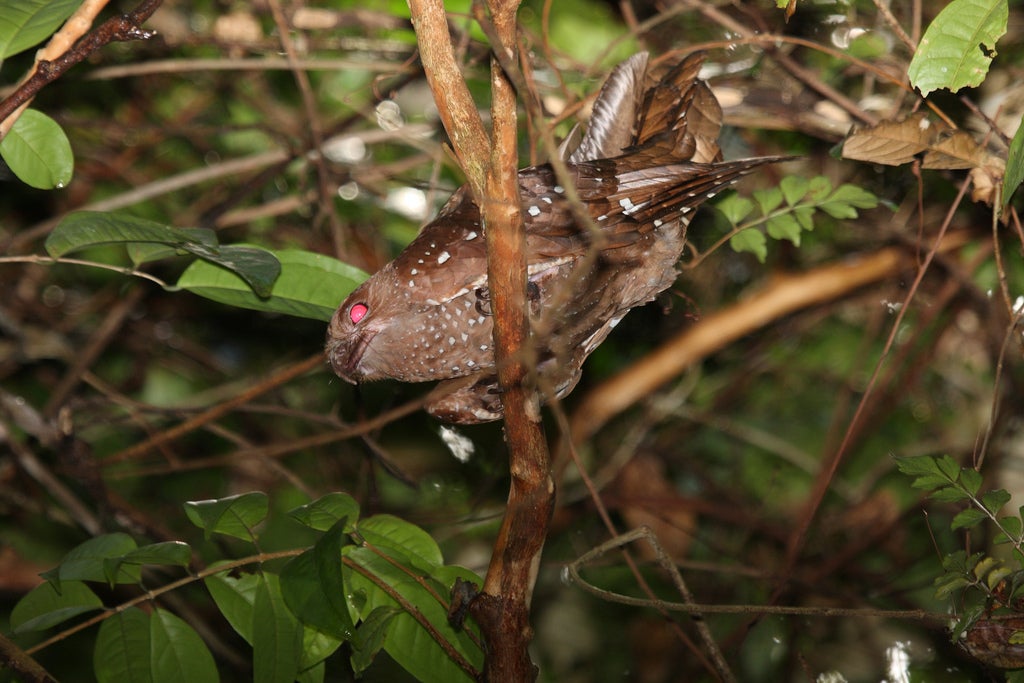 The Oilbird (Steatornis caripensis), also called the guácharo, is more like a bat than a bird in some ways: It nests in caves, and is the only nocturnal-flying, fruit-eating bird in the world. Oil for torches and cooking can be rendered from the layers of fat in the bodies of chicks, thus the name. Taxonomically, oilbirds are related to insect-eating nightjars and placed in the same order, Caprimulgiformes; but as a “specialist fructavore,” it is sole member of the family Steatornithidae and suborder Steatornithes. Oilbirds are abundantly found in the countries of northern South America and the Caribbean, including Bolivia, Brazil, Colombia, Ecuador, Guyana, Peru, Trinidad and Venezuela. 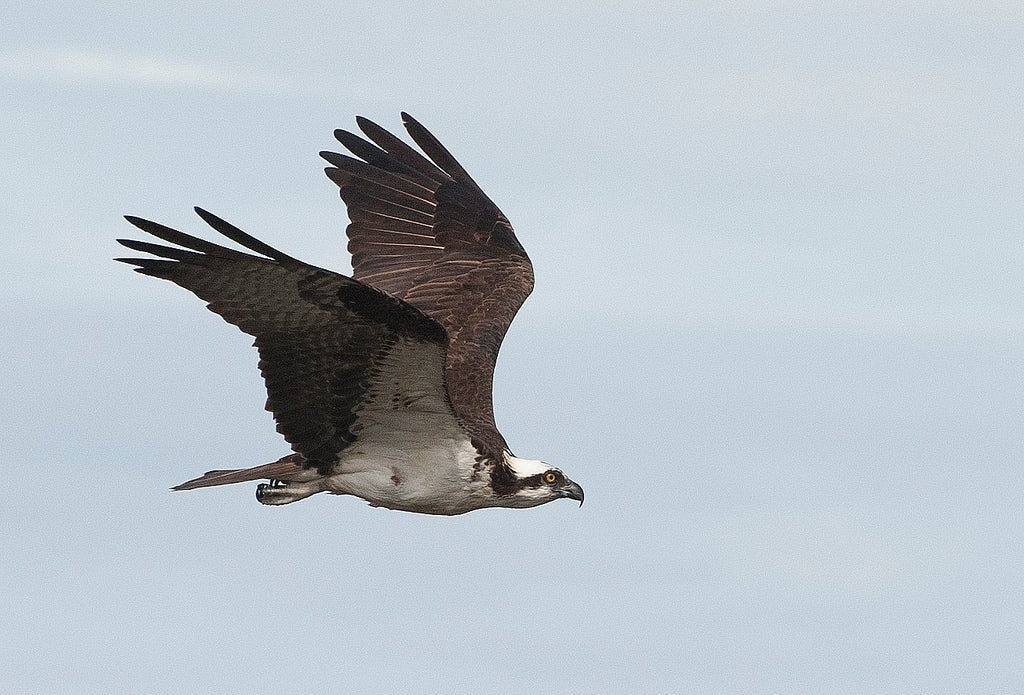 Osprey (Pandion haliaetus) are found worldwide, and have the widest geographical distribution of any bird species. But that isn’t why this expert fish-hunter is evolutionarily distinct. Osprey have subtle characteristics that are different from other diurnal (feeding in daylight, resting at night) birds of prey, such as toes that are of equal length, and talons that are rounded rather than grooved. Osprey also have an outer toe that is reversible (as do owls), which lets them get a secure grip on wriggling fish: two toes in front and two in back. Experts are still debating how to classify the osprey: One scheme groups it with hawks and eagles, and another puts it into its own unique family. 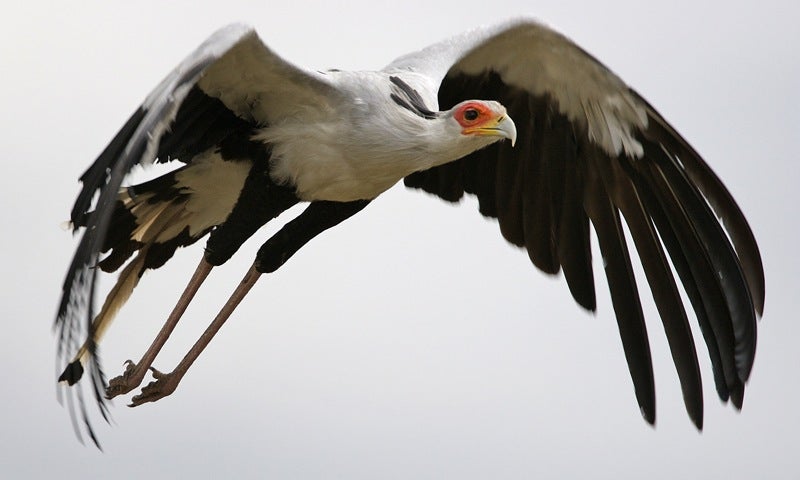 Genetically distinct from other living birds of prey, the four-foot tall Secretary Bird (Sagittarius serpentarius) is another diurnal raptor in a one-bird family, called Sagittariidae, in the order Falconiformes. Secretary birds are native to sub-Saharan Africa, where they like to spend their days strolling about the savannah looking for prey, and their nights roosting in acacia trees. The Secretary Bird is rated “vulnerable” on the IUCN Red List, with population numbers dropping rapidly due to habitat loss and other pressures. 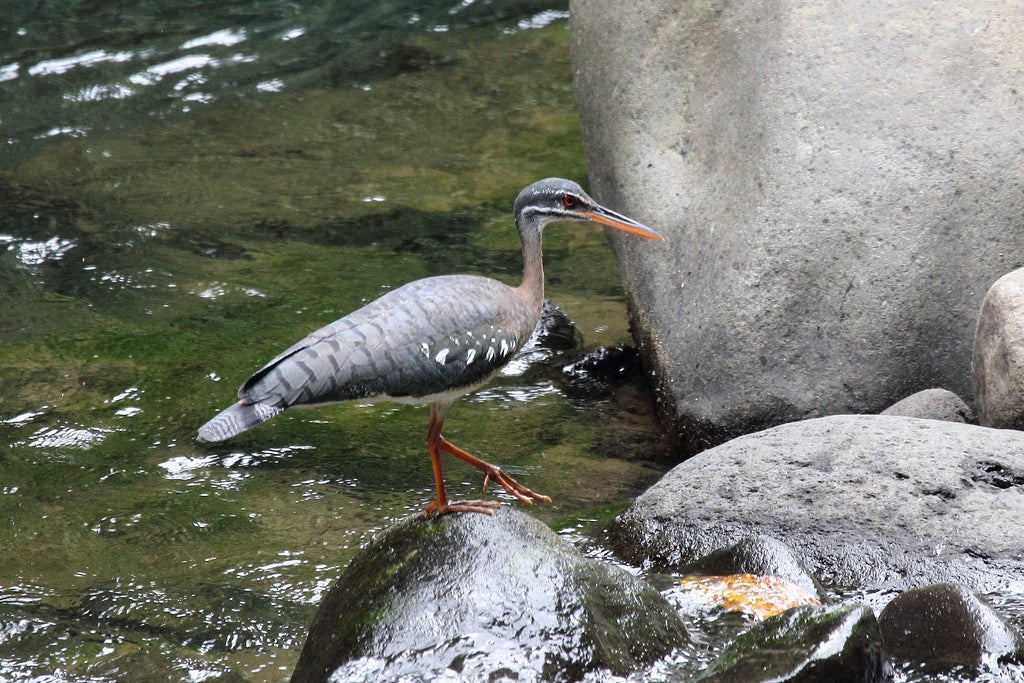 The Sunbittern (Eurypyga helias) can be found across a huge range in Central and South America, from northern Mexico to Brazil and southern Peru. Sunbitterns nest in trees and forage on the ground for large insects, crayfish, frogs, and small fish. The Sunbittern shares some traits with the Kagu, such as powder down; genetically, the two species may be each others closest living relatives. Although its population seems to be decreasing, the Sunbittern’s numbers are still very healthy. 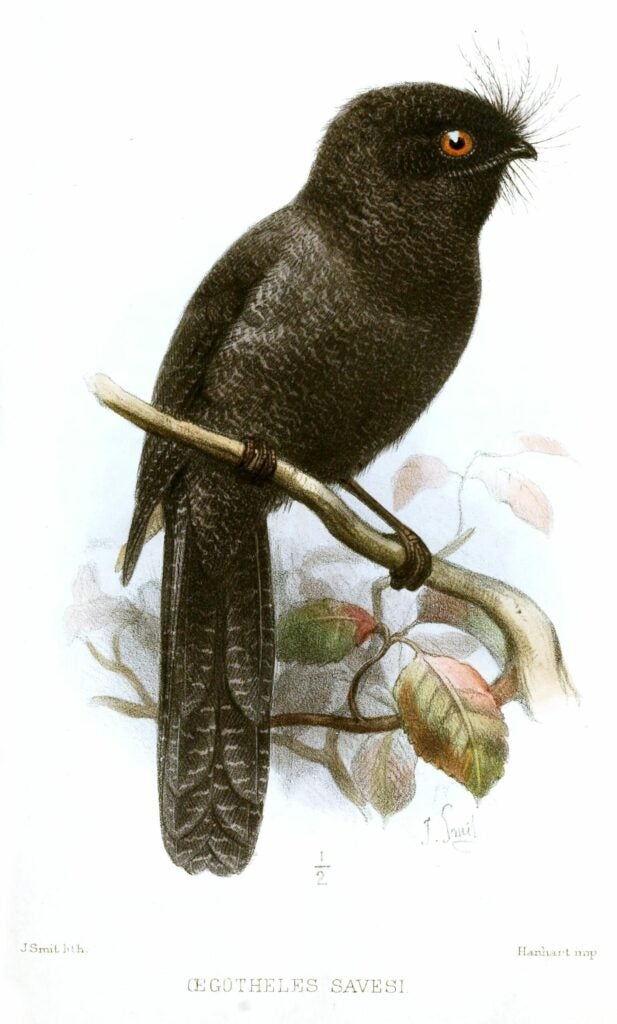 Found only on the island of New Caledonia, this bird has been sighted only a handful of times since 1880–the last in 1998, according to BirdLife International. No one is even sure what the New Caledonian Owlet-nightjar sounds like. Rated as “critically endangered” on the IUCN Red List, experts assume there are fewer than 50 individuals living, the result of predation by invasive species. 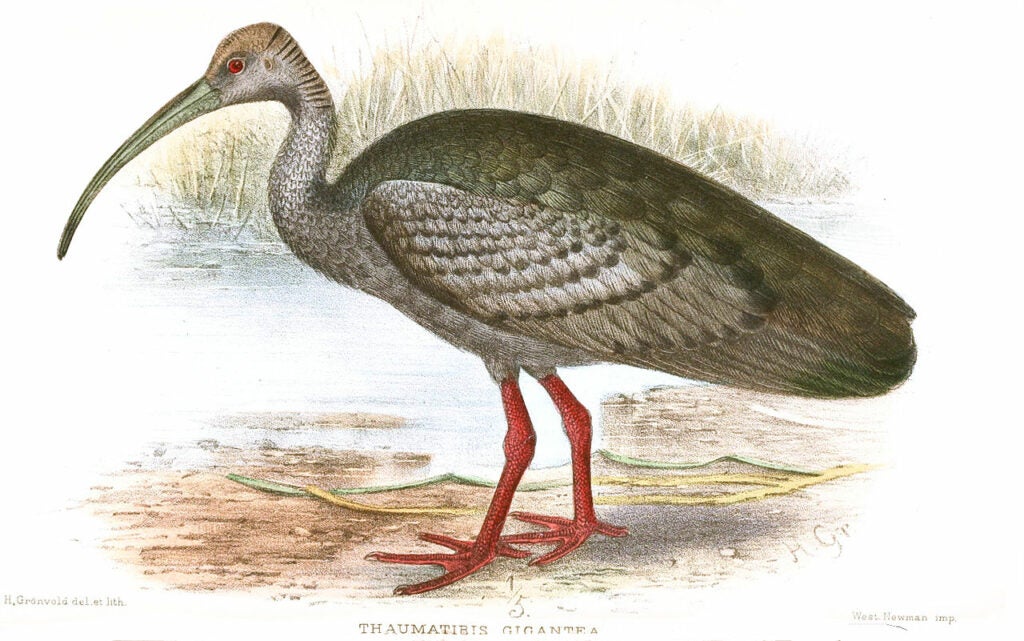 The Giant Ibis (_Thaumatibis gigantea)___ is one of the world’s most evolutionarily unique birds, and the most critically endangered. Found mostly in Cambodia (it’s also been sighted in Laos and Vietnam), the bird’s preferred forest and wetlands habitats are rapidly disappearing. Grouped in the ibis family Threskiornithidae, it is the world’s largest ibis, with adults standing over 3 feet tall and weighing about 9 lbs.
Animals
Biology
Birds
Conservation
Evolution
Wildlife
future of the environment
ornithology