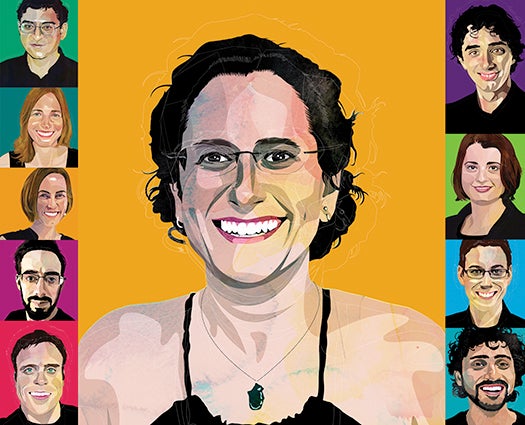 As the sun set over the mountains near Jinan, China, Nicole Abaid sat by the narrow mouth of a cave and watched a colony of bats emerge. Unlike the radar that humans use, the bats’ echolocation didn’t seem to jam as the animals converged into a thin stream. Abaid, a mechanical engineer and mathematician at Virginia Tech, was there to discover why—an insight that could lead to more intelligent robots.

After getting her start by studying how schooling fish come to consensus, Abaid has broken new ground with bat colonies. Bats can adjust their signals so they don’t overlap with their neighbors’ frequencies. Abaid suspected they may be able to share information too, so she modeled how they might listen in on each other to better avoid obstacles. She went to China to line the bat cave with infrared cameras and an ultra-sonic mic that could gather data to verify her model. “The big idea is to tell if and how they use each others’ signals,” she says. At the same time, she’s designing bat-inspired ultrasonic sensors to improve communications among robots.

Ultimately, Abaid hopes to imitate how animals elegantly overcome challenges like radar jamming—research that could some day help us manipulate man-made swarms, such as underwater vehicles that rely on sonar. “Learning about how this biological system works could help us design how we control engineered systems,” she says.