Vampire bats rendezvous with their friends when dining out

Fancy meeting you on this cow! 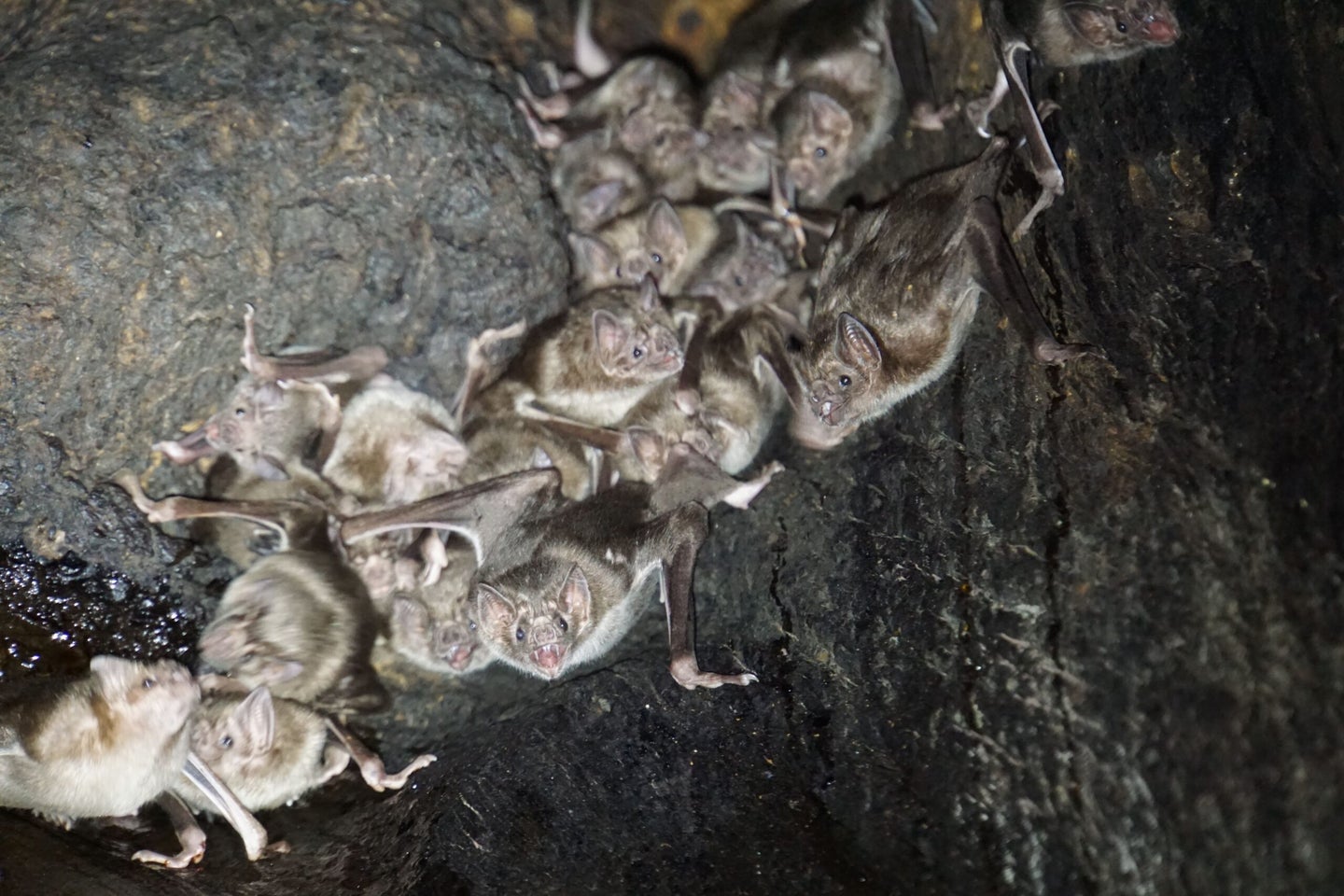 Did your school dining hall offer a universally beloved dish? One that attracted long, meandering lines, one that people would immediately line up for without finding a table? (At my school it was hash brown triangles and sweet potato fries.) Maybe you couldn’t possibly get there early enough to get yourself a plate—so a contingency plan was to pray you’d run into a friend who was already in line—and then you could share with them.

This may seem like a uniquely human experience, but there’s evidence that a similar behavior is fairly common among vampire bats. A recent study published in the journal PLoS Biology found that on foraging trips away from home, these bloodsuckers tend to meet up with roost mates they share close bonds with. The observed bats didn’t leave to go foraging together, but if a latecomer ran into a friend already slurping on a cow, that friend was likely to scoot over and share its tasty spigot. On the other hand, if the bats didn’t already share bonds, then nobody asked to pull up a seat, and one would continue on its merry way.

“What this showed us is that these are really bonds,” says Gerald Carter, one of the study’s authors. “Even if you put them in a totally different social environment, they’re still with each other,” says Carter, who works as a behavioral ecologist at The Ohio State University.

Two bats, both alike in dignity

Vampire bats are easy enough to describe: tawny, snub-nosed creatures that look a little like mice with pug faces, cat ears, and delicate, translucent wings. Although they can have a wingspan up to seven inches, when folded up, the tiny creatures can fit inside teacups. Chiropteran social behavior, though, has until recently remained mostly a mystery.

Carter knew from previous research that females sometimes form tight social bonds that involve grooming one another, but also go as far as sharing regurgitated blood leftovers. Male vampire bats tend to fight more over territory, and do less grooming and food sharing. But that female bonding behavior had only been observed in roosts. This time, Carter’s team wanted to know if that generosity held up in the feasting fields.

To figure it out, Carter and his colleagues looked at two groups of female vampire bats living in the wild in Panama. They decided to focus on females because they tend to have stable social relationships, as opposed to more combative males.

One group included 27 wild females that were caught, tagged, and released. The other group comprised 23 females that had spent 21 months in captivity and were then released back into the wild. This distinction is important: Keeping the bats in captivity allowed Carter to closely observe the relationships within the group. He learned which bats groomed and ate together, and gained a solid understanding of their social structure. The question now was: Once the previously captive bats were released, would they choose to interact with unfamiliar bats?

Evidently not. Once those bats were out of captivity, their previous relationships persisted, with the bats tending to spend time with others they already shared bonds with. This pattern held true even in the tagged wild bats.

“It implies that the animals have a mutual social preference for each other, which is not something you can immediately tell just from observation,” Carter says. For instance, animals in captivity may appear to be spending time together, when in reality they both just prefer the same corner of a cage or feed at the same time. But these bats leave on their own and choose to reconnect with friends they see outside the roost.

“I was surprised that they never left together,” says Carter. “None of the 50 bats that we tracked left the roost at the same time. They left minutes apart, which I didn’t expect at all.” Are the bats in a group chat making plans to meet up at the same buffet (which in this case meant the same cow)? It’s more likely, Carter says, that they use echolocation. He says his team recorded different calls the bats made to each other, including one call they had never heard in captivity or a roost, which means that “this could be a call that they specifically use when they’re out there hunting,” says Carter.

The reason for this particular style of foraging is twofold. By leaving the roost to forage individually, the bats don’t have to compete among their own colony for food. But if they do encounter bats from outside colonies while foraging, teaming up with a roost buddy already at the table, so to speak, potentially gives them a spot on a cow. Carter says vampire bats don’t have deep hierarchies, and going out in packs could breed dominance.

[Related: Why do so many diseases come from bats?]

While bats make up one quarter of mammal species, we actually don’t know that much about them because they’re so difficult to track. Researchers know much more, for instance, about bird and primate socialization. But this study provides a rare peek into bats’ inner lives. While the finding itself is intriguing, Carter says it sets the stage for future research on bat behavior.

His next plans entail using GPS to localize both bats and their cattle prey so he can track every bat-cow encounter in a given area. This data could be useful in tracking bats as vectors for spreading rabies to livestock or people, which is a problem in places with carnivorous bats, like Latin America.

“People think there’s nothing really interesting going on [with bats],” Carter says. “I just don’t think this is the case. I think they do have these really complex relationships, but we haven’t been able to study them.”