These monkeys avoid sick friends by sniffing their poo 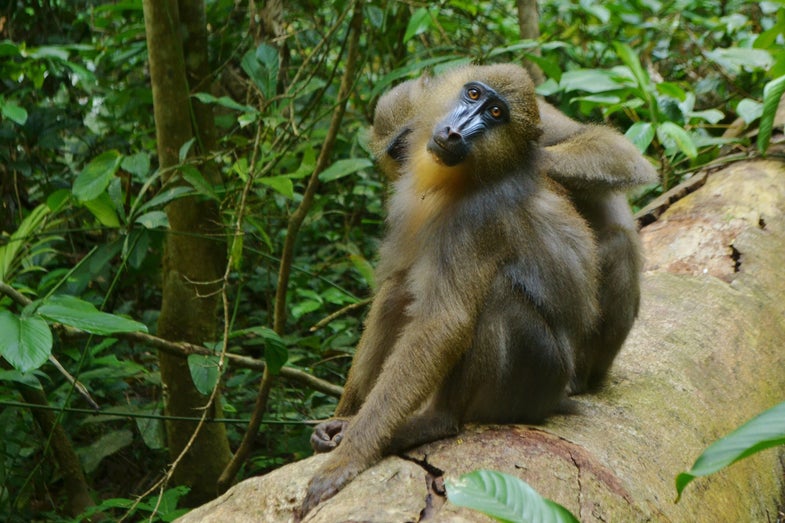 Even if you’re touchy-feely with your friends, your sense of self-preservation probably prevents you from giving your buddy Joe a big’ol bear hug when he’s clearly got a cold. I mean look, Joe, we’re not going to say you can’t hang out with us because of that runny nose, but no, you can’t have a sip of my soda. Gross.

It turns out the mandrill—a seriously social member of the Old World monkey family—has a similar strategy. Sort of. To avoid spreading parasites through the group, the monkeys avoid grooming someone—an otherwise common social activity—if their poop smells off.

The new findings, published Friday in Science Advances, come out of an ongoing research project dedicated to sussing out the secret lives of these primates. Researchers have been following a group of around 140 individual Mandrillus sphinx that live together in southern Gabon.

The project broadly aims to study the evolution of social behavior. But parasites happen to be an unfortunate side effect of tight-knit social structure. This is pretty straightforward: parasites need to jump from host to host to survive, to it stands to reason that as animals become less isolated, they become more vulnerable to parasitic disease. Social animals have clearly evolved ways of getting around this to some extent, but the details of the relationship between social structure and parasitism are still murky.

“What we currently know is the intimate link between infectious risks and host density or ranging patterns,” the study authors write on the project’s website. “What we currently do not know, in humans as in other species, are the fine-grained consequences of parasitism on social interactions between individuals.”

And mandrills represent a perfect opportunity to find out more. They live in large ‘hordes’ that can include hundreds of individuals (or the females and kids, do, anyway—adult males live in isolation unless it’s mating season) and like many monkeys, they groom one another as a social activity. All that touching and licking is great news for a parasite.

So for 2.5 years, researchers followed 25 of the monkeys to observe their behavior—and collect fecal samples.

By comparing behavioral observations with data from poop analysis, the researchers were able to uncover a smart strategy: mandrills don’t ostracize members of the horde who’ve come down with a bug, but they do groom them less. Scientists saw grooming rates go down as individuals became infected with larger numbers of parasites, but once the researchers treated and cured the sick mandrills, their buddies started grooming them again. Keeping monkeys with parasites out of the hair-braiding circle helps keep the horde healthy without upsetting the social structure.

And the discerning mandrills may take their cues from poo.

Analysis showed that fecal samples rich with protozoa had a different chemical signature than specimens from healthy monkeys, and the researchers suspected that the sickly scat might give off a signature scent. Sure enough, when mandrills were exposed to samples of poop with varying levels of parasites, they were more likely to avoid the unhealthy excrement.

“The results followed our hypotheses, but this study is exciting because we show, with a correlative and an experimental approach, that mandrills use a subtle strategy to decrease the risk of infection with some gastro-intestinal protozoa,” says first author and evolutionary biologist Clémence Poirotte. “They do not simply ostracize parasitized individuals from the group, they avoid grooming them, particularly around the peri-anal area, which is a behavior highly risky in term of parasite transmission.”

“It suggests that the ability to detect parasitized individuals and to adapt the social behavior accordingly may help social species to cope with the increased parasite risk linked to group living.”

Perhaps one day, distant primate cousins like the mandrill can help us understand other, similar adaptations in human evolution. We might not go around sniffing each other’s butts, but we’ve certainly learned to be wary of someone else’s snot.