It takes work to become this bat’s BFF. 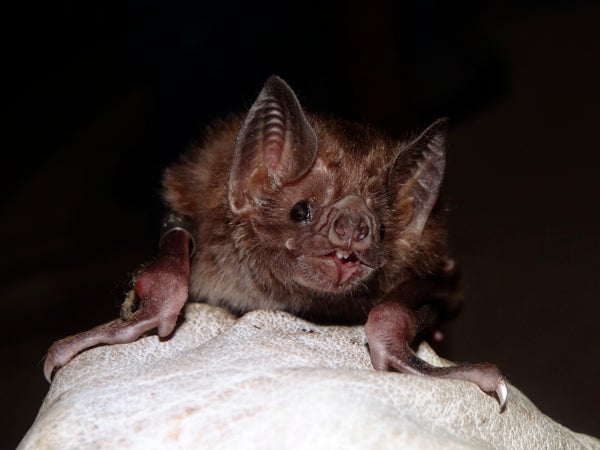 Who wouldn't want to be pals with this cutie?. Daniel Streicker/
SHARE

Would you let a stranger borrow your car or your favorite pair of shoes? Probably not. What about your best friend?

You’re arguably more likely to hand over your keys or your ritziest kicks to your BFF, of course. But once upon a time, the person that you adore most was also a stranger—and the road from random acquaintance to closest pal can be a long journey. Friendships always take time, as each of you slowly builds trust for one another. After all, you don’t want to lend someone your ride who wouldn’t do the same for you.

“If the other person doesn’t cooperate with you, you’re even worse off for trying to start that relationship,” says Gerald Carter, a professor of behavioral ecology at Ohio State.

This idea of slowly investing your time, energy, and supplies into a trusting friendship isn’t new. In fact, scientists coined a theory for it, called “raising the stakes.” And people aren’t the only living creatures that amass a network of complex social relationships. But it turns out the spookiest members of the animal kingdom—our dearest cave-dwelling bat friends—also slowly test the waters when it comes to getting to know a new buddy.

A new study in Current Biology authored by Carter found that wee vampire bats also “raise the stakes” when cooperating with their fellow cave mates. Early on in their friendships, these tiny mammals test the waters by grooming each other. If that works out, they move on to the species’ most coveted kinship act: sharing blood meals.

Bats might not be the first creature that comes to mind when you think of friendly critters, but these relationships are essential. Each bat needs about two tablespoons of blood to eat each night, and going a few nights without that meal could be fatal, says Brock Fenton, a bat biologist at Western University in Ontario, Canada who was not involved in the study. Being a good sharer, and a good friend is quite literally life or death.

Carter and his colleagues followed pairs and groups of previously unfamiliar female vampire bats over 15 months to record how they interacted. What they saw was a progression of friendship “investments” in the form of grooming, with the grand prize being blood sharing, which only ended up in 10 to 15 percent of the pairings.

This kind of study—following how a close friendship develops over time—has yet to be done in such a way in people, primates, or other animals that are known to have very complicated social structures.

“We understand the consequences of having close relationships,” Carter says, but “we know less about the process of building those, and how much is under the control of an individual.”

It’s tough to capture the moment when strangers become friends, animals, or humans. You have to be there at the exact right moment in the wild, which can take years of observation. But viewing friendly relationships in captivity is tricky too. You never can be completely sure what you’re watching isn’t an acquired skill you trained a critter to do.

That’s why vampire bats make the perfect subject for this kind of study, Carter says. You can recreate their natural home, a lot of times, a dark tree trunk the size of a closet, quite easily in a lab setting, and you don’t have to train them to do anything.

The wildest part—these creatures who shared their bloody snacks still remained friends when they were released into the wild, Carter says. With the help of tracking devices, the researchers could see the “bat besties” meeting up again outside of captivity, even if the wild population had a much larger group of potential buddies to choose from. These collaborative relationships weren’t just for survival in captivity, he says, but are really lasting friendships.

Fenton says that this kind of research puts bats in a new perspective as incredibly cognizant creatures, alongside primates, whales, elephants, and humans.

“They know what they are doing. They know each other,” he says. “Those are all things that used to be our domain.”

So while bats might give you mental images of Halloween or spooky caves, in reality, they are critters who, just like us, carefully curate their ride-or-die squads.