How Hungry Bats Call Dibs On Dinner, And Warn Others to Back Off 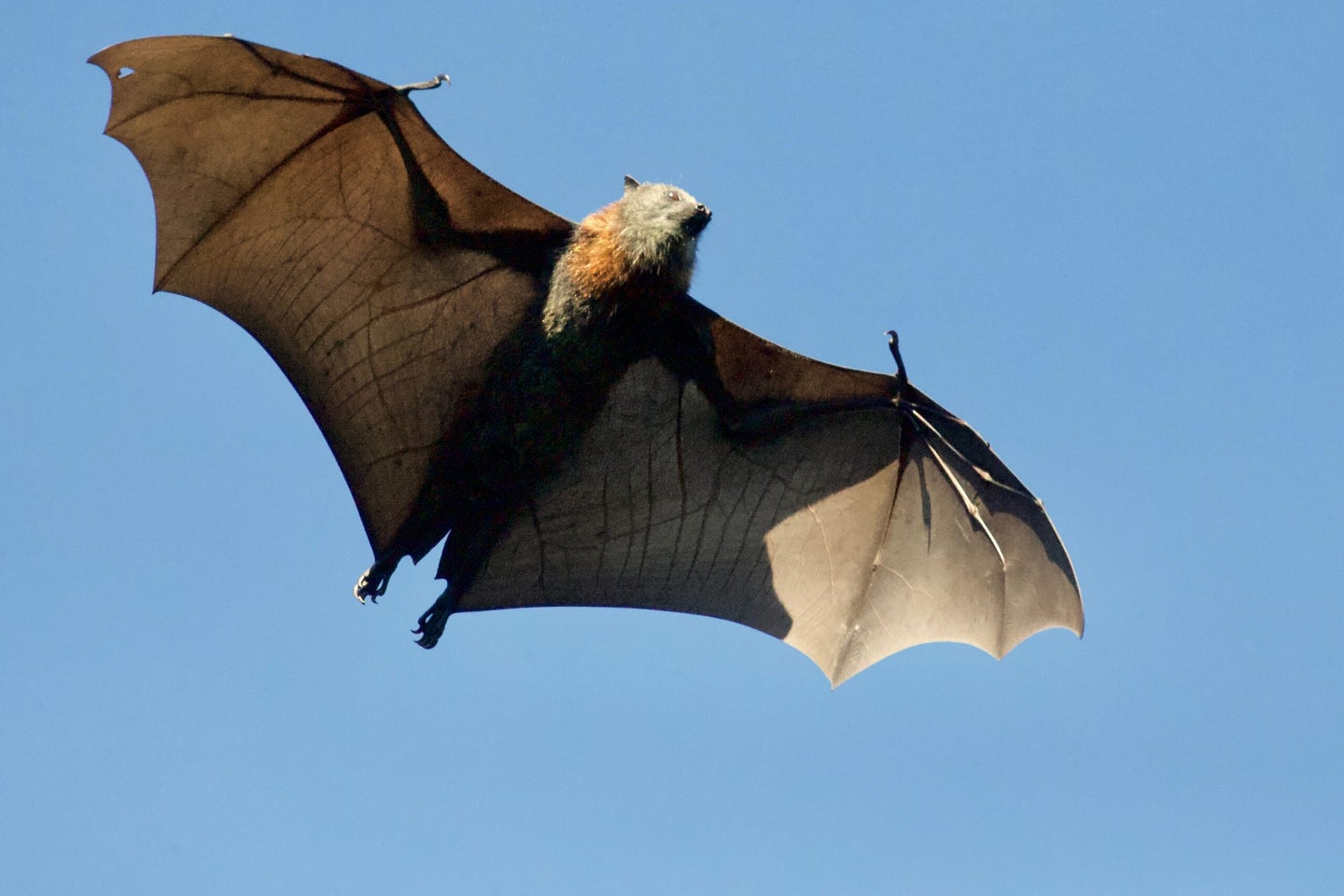 Swooping, diving and turning in total darkness, bats hunt their prey, avoid obstacles and dodge their fellow fliers. They can navigate through clouds of other bats and zoom in on a single mosquito with lethal precision. This is all thanks to their biosonar, which gives them the ability to echolocate. But not every ultrasonic chirp is for navigation purposes. Bats are also saying, “Back off, buddy — that moth is mine!”

Genevieve Spanjer Wright, a postdoctoral researcher at the University of Maryland’s Auditory Neuroethology Laboratory, didn’t set out to find this, she says. Initially, the goal was to study how bats learn from each other. In a recent paper, she and her colleagues explain how bat social calls help the animals call dibs on their prey.

Like many bat researchers, Wright and her colleagues get bats when someone calls animal control complaining about a flying mammal in the attic, she explains. Then the bats become test subjects. This means they have to fly around a special, echo-free chamber and capture a mealworm dangling on a string, while scientists record their ultrasonic chirps. This can be a tough task for bats unaccustomed to hunting down stationary prey — but they’re a quick study.

In one experiment, Wright wanted to see what happened when a skilled bat, which had successfully nabbed a tethered mealworm snack in the past, flew in the chamber with an unskilled bat, which didn’t know what was going on. Another study looked at chirp changes among two experienced mealworm-hunting bats.

Over the course of several flight tests, spread out over a couple years, the researchers tied a wriggling mealworm to a string and watched pairs of male bats try to grab it. Meanwhile, they recorded the bats’ ultrasonic calls and produced visual representations of them, called spectrograms, using special software. When Wright and her colleagues looked at the spectrograms, they noticed an unusual-looking pattern, corresponding to a bat call they hadn’t seen before.

Bats talk in a frequency we can’t hear, so spectrograms display bat calls as a visual pattern, like this:

“We had to slow down the audio to hear it, but we noticed they sounded quite different, too,” Wright says. “They’ll be flying around the room, echolocating the whole time, and then will make one of these calls interspersed with their regular calls. They still have to not crash, and find the food.”

The humans nicknamed this unique, three- or four-part chirp a “frequency-modulated bout,” or FMB. It’s a social call only emitted by male bats, only while they’re hunting for a meal. In some situations, both bats would make the sound, but the one who made the most FMBs was more likely to get the food.

“We think it’s a ‘Get away, back off’ call. After this call was made, the interbat difference increased,” Wright says. Meaning it worked — the other bat actually backed off.

It’s also individually distinct, meaning each bat has his own version. Previous research on bat signals has shown each bat call contains information about the individual — in a way, it’s similar to how you can recognize an individual person’s voice. Wright can’t say for certain whether this helps bats establish dominance, but she says the individual FMB calls may help bats decide whether to challenge each other.

“These calls do seem to encode information about the individual, so they know, if they are encountering one of them again, ‘OK, this bat is going to win, I should back off,’” she says. “In certain pairs, one bat would make the call more than the other, and that bat would also get the food more often. But the sample size is too low to say this is what happened.” 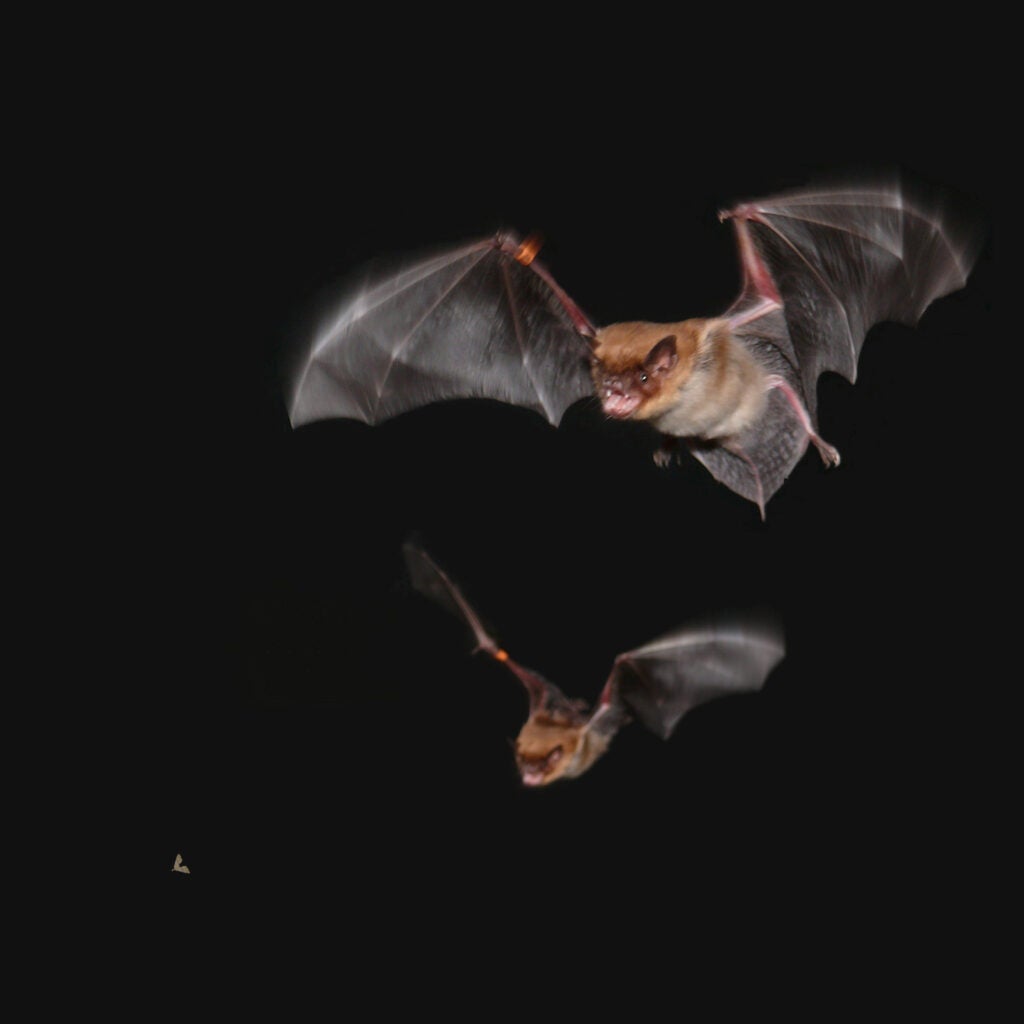 Male big brown bats in flight use a special call, different from the echolocation calls they use for navigation, to warn other foraging males away from prey they’re claiming for themselves.

An earlier study showed that bats make up to six different types of “social calls,” as opposed to navigational chirps or the feeding buzz that ramps up in amplitude when a bat homes in on an insect. This is the first study to show bats make a special call when they’re hunting, and that it changes other bats’ flight behavior. By the way, male bats produce FMBs in the presence of females, but the female bats don’t do it.

These bat flights lasted eight seconds, in case you were wondering.

“Bats can be hard to study in some ways, because they’re fast and nocturnal and ultrasonic. When you’re in the room, there’s so many things going on that you have no idea about until later, when you look at the data,” Wright says. “Eight seconds is nothing to us. But bats can do and say so much during that time.”