Why do so many diseases come from bats?

Many viruses originate in bats, but that doesn’t mean we should live in fear of them. 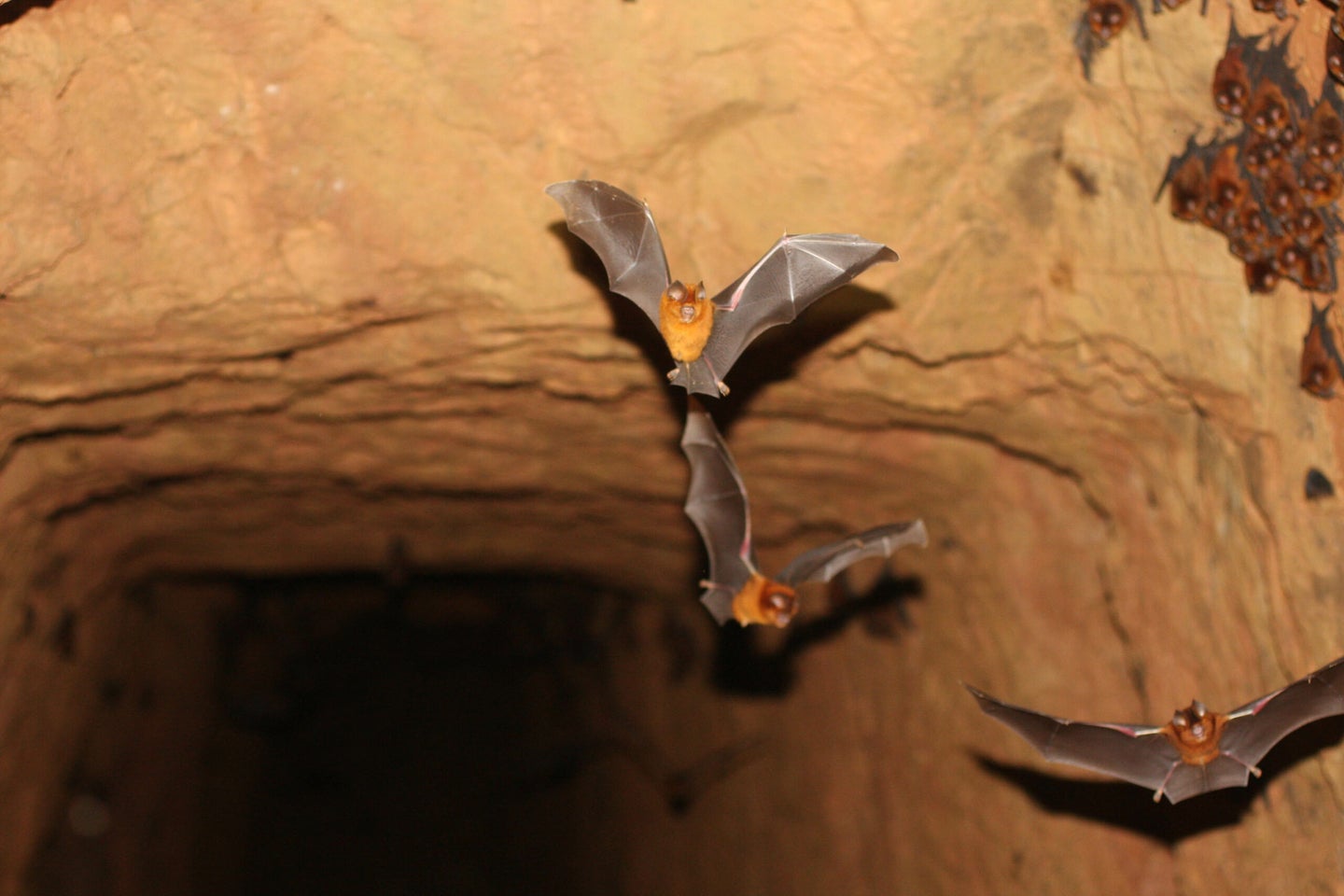 Members of a newly discovered bat species, the Hipposideros bats, flying out of an abandoned gold mine in Western Kenya. B.D. Patterson, Field Museum
SHARE

Much about the beginning of the COVID-19 pandemic remains unclear, but it’s likely that the novel coronavirus originated in bats, perhaps then spread to another animal that in turn passed it to people.

This isn’t the first disease we’ve faced that has come from the little flying mammals. Other coronaviruses that researchers are aware of that also cause severe illnesses in people—the original SARS and Middle East Respiratory Syndrome (MERS)—have been linked to bats. A recent study found that bats and the coronavirus family have in fact been evolving together for millions of years, although it’s rare for different bat species to pass coronaviruses to each other.

Bats are natural hosts for other high-profile pathogens such as the Ebola and Nipah viruses as well. Scientists have found that bats seem to harbor a particularly large number of viruses that can infect people compared with most other animals.

So what is it about bats that causes them to carry so many of these viruses? Researchers have identified a few possible explanations—although none of them mean we should live in fear of bats or blame them for the spread of COVID-19. Just because bats harbor viruses that can infect people doesn’t mean that they’re spreading disease in their wake while flitting across the countryside every night.

Bats have some unique characteristics that might allow them to host an abundance of viruses, says Bruce Patterson, a curator of mammals at the Field Museum of Natural History in Chicago. These mammals are “extraordinarily social” and spend much of their time packed together. During the summer, the world’s largest bat colony descends on Bracken Cave in Texas, bringing more than 15 million Mexican free-tailed bats together. The pups born in this cave can roost in densities of up to 500 bats per square foot.

“We’re all learning about social distancing and its effects on breaking up viral transmission—well, that’s hard to do when your whole biology involves huddling and taking care of one another in these very…tight social groupings,” Patterson says. “It doesn’t take very long for any pathogen or parasite to make its way through the entire population.”

Because of this gregarious way of life, bats evolved powerful immune systems in order to survive, Patterson says. This robust defense allows them to carry viruses without falling ill or at least withstand deadly diseases such as rabies longer than other mammals can.

“Bats are able to keep rabies at arm’s length and actually live with it for a while, whereas a human that comes down with rabies is gone in very little time,” Patterson says.

This natural protection powers down only when bats hibernate in winter to save energy. That’s part of why the tiny mammals are so vulnerable to the fungus that causes white-nose syndrome, the disease devastating bat populations in North America, while hibernating.

In addition to having this beastly immune system, bats are also the only mammals with the ability to fly. Some of the adaptations bats have evolved to help them stay aloft could also make them resilient to viruses.

“Flying is one of the most expensive ways to get around; it’s far more costly energetically than swimming or walking or running,” Patterson says. “Bats have to really work to stay in the air and do it hour after hour through the night.”

Because bats use so much energy to fly, they have a high metabolic rate. When animals metabolize food and turn it into energy, though, this process creates byproducts called free radicals that are harmful to our DNA. Animals, including humans, have ways of preventing or repairing DNA damage, and these capabilities seem to have become particularly efficient in bats to help them cope with their whirring metabolisms, Patterson says.

When viruses infect an animal, they invade its cells and force them to build more viruses instead of copying their own genetic code into new cells. But viruses might not be able to hijack bats’ genetic machinery as effectively as they do in other mammals because bats have such excellent DNA editing and repair mechanisms.

“That same property translates into really exceptional longevity in bats,” Patterson says. A little brown bat living in your attic might survive 30 years or more, he says, while the house mouse, another mammal of similar size, has a lifespan of only two or three years.

It’s also possible that flying gives bats such an incredible workout that their bodies heat up enough to fight off viruses while on the wing. This is in some ways similar to the way a fever helps fight infection.

All of these factors combined—their super social behavior, adaptations for turbo-charged metabolisms, and elite immune systems—creates the perfect storm for harboring and transmitting diseases. “The things…that are peculiar to bats that make them pretty good at keeping viruses from overwhelming their systems also make those viruses persist in their systems longer than they do in other groups,” Patterson says. “And that increases the potential for bats to pass it along to somebody else.”

However, detecting a virus in a given animal only provides evidence that it can infect that particular species, Nardus Mollentze, a viral ecologist at the University of Glasgow, told Popular Science in an email. It doesn’t directly imply that the species in question is actually transmitting the virus to people. In fact, his team found that bats are not the most common animal to transmit infectious diseases to humans. There are other species that are just as likely.

Mollentze and his colleague Daniel Streicker, also at the University of Glasgow, recently created a database of viruses found in mammals and birds. They found that groups of closely related animals that had a lot of species within their group had more human-infecting viruses associated with them compared to groups of animals with less species. In other words: there are a lot of different bat species, so it’s not surprising that we’ve detected so many zoonotic viruses in bats.

They reported their work on April 28 in Proceedings of the Natural Academy of Sciences.

“The number of zoonotic viruses coming from bats is certainly high, but that is also true of other species rich groups such as rodents,” Mollentze said. “What our data shows is that as a group, bats do not transmit more viruses to humans than other mammalian groupings of comparable size, and are not more likely to transmit viruses to humans than any other group.”

Many species of bats are endangered and very rarely come into contact with humans, he added. In fact, a number of diseases found in bats are typically passed to people by other animals. You’re more likely to catch rabies from a skunk or raccoon than a bat, MERS is often transmitted by dromedary camels, and the SARS epidemic in 2003 probably began with captive civet cats.

To avert future pandemics, it’s essential that we discover which viruses are circulating in wild animals and could potentially infect people. That means monitoring animals that could play a role in their transmission to people, including bats.

However, there’s a lot we still don’t know about this diverse group of animals, Patterson says. In the journal ZooKeys, he and his colleagues recently reported their discovery of four new species of leaf-nosed bats, which are closely related to the family of horseshoe bats from which the novel coronavirus may have originated.

Despite the fact that bats contain and spread disease, they are still vital members of the world’s ecosystems and we are far better off with them than without them. Bats often escape our notice because they’re nocturnal and different species tend to look very similar. “They aren’t colorful [and] they don’t have beautiful songs that we can listen to and recognize the way we can with birds,” Patterson says. “Twenty-five percent of the bat species we recognize today were thought to be something else 15 years ago; that’s a shocking number.”

What we do know, however, is that bats are incredibly valuable members of their ecological communities. They gobble up insects that would otherwise feast on crops; bats are estimated to save farmers in the United States at least $3.7 billion per year in pest control services. Their hearty appetites also keep insects that transmit diseases such as West Nile Virus in check.

Nectar-drinking bats pollinate the plants they feed from; in Africa, baobab trees are mainly pollinated by fruit bats. As they fly about, bats also help plant new vegetation in tropical forests by pooping out seeds from the fruit they dine on.

“All of these things are really important ecological roles and we can’t lose track of that because of our fears and concerns about viruses associated with [bats],” Patterson says. Bats are facing threats enough from habitat loss, climate change, diseases like white-nose syndrome, and the bushmeat trade. “They’re already on the ropes because of human activities and we should do all we can to make sure we don’t further imperil them through our actions.”