These ice chunks are fascinating to look at, but can cause serious flooding. 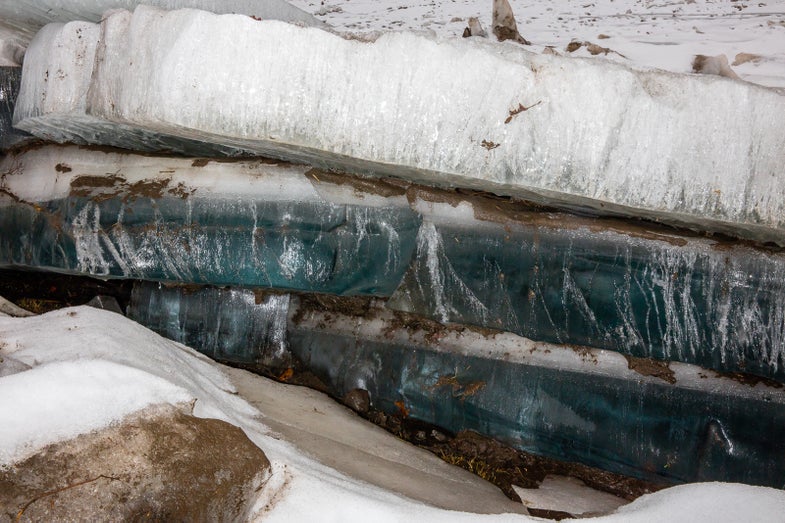 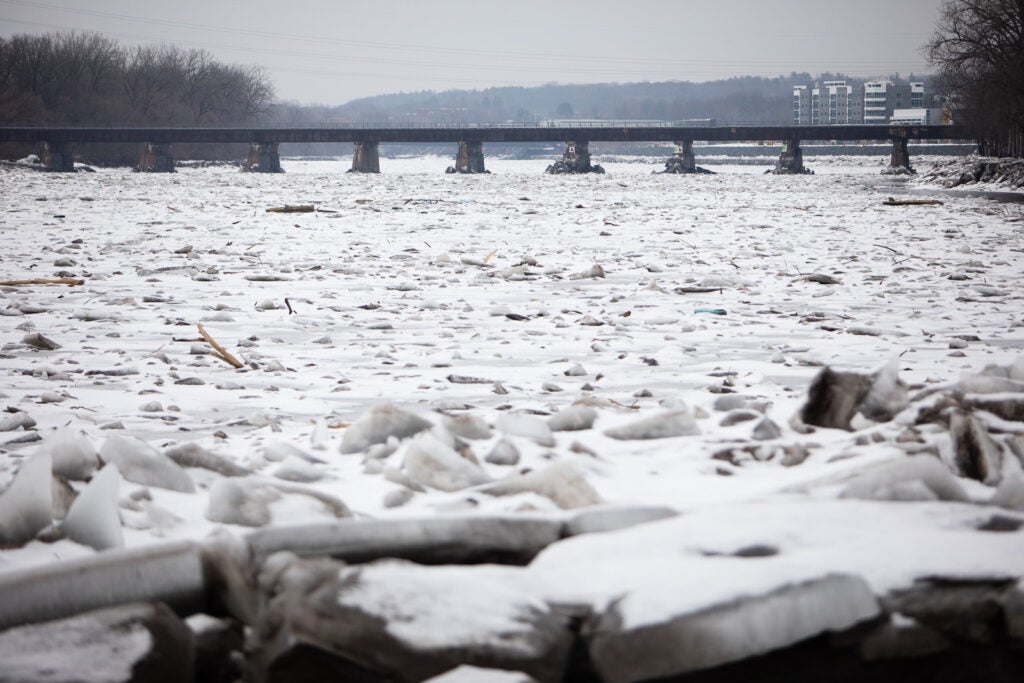 A railroad bridge across the river causes ice chunks to jam behind solid surface ice.

Ice jams are a fascinating phenomenon, especially in areas prone to them like my hometown of Schenectady, New York, where pieces of the Mohawk River transform into a chunky sludge of frozen chunks every year. But, while the frozen river can be impressive to look at, it causes serious problems including dangerous floods.

This winter has proven especially conducive to ice jamming, due in large part to the wild temperature swings we have endured with super cold temperatures happening right before or after bouts of unseasonable warmth. Here’s what’s happening. 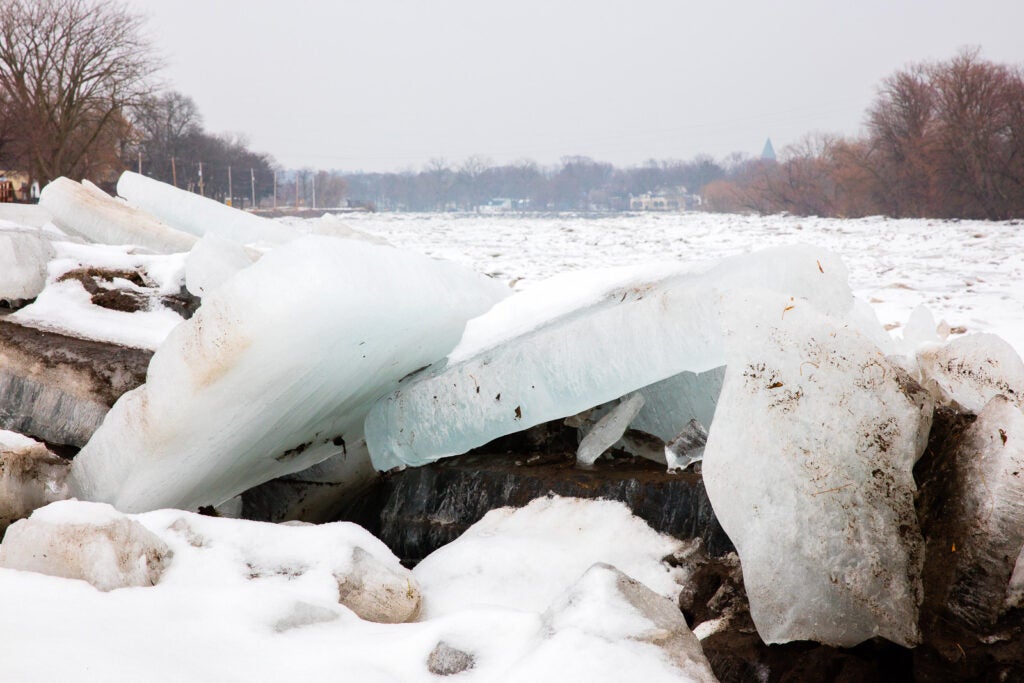 Giant chunks of ice washed up on the shore of the Mohawk River.

This type of jam is called a breakup jam. “Rain and snowmelt cause the water level to rise and break its connection to the bank,” says Steven Daly, a research hydraulic engineer with the US Army Corps of Engineers at the Cold Regions Research and Engineering Lab in Hanover, New Hampshire. “It breaks up the ice and the water starts moving the pieces until they reach a point where the capacity of the river can’t carry all the ice.”

This typically happens when the temperatures get cold enough to form a thick layer of ice on top of the water, then warm up rapidly, which was exactly the situation on the Mohawk River last year. The average temperature during the first week of January 2018 stayed well below freezing, with a high that remained below zero on several days. Then, by the 13th of January, it was 60 degrees with rain, which is a perfect recipe for a pile-up like this. 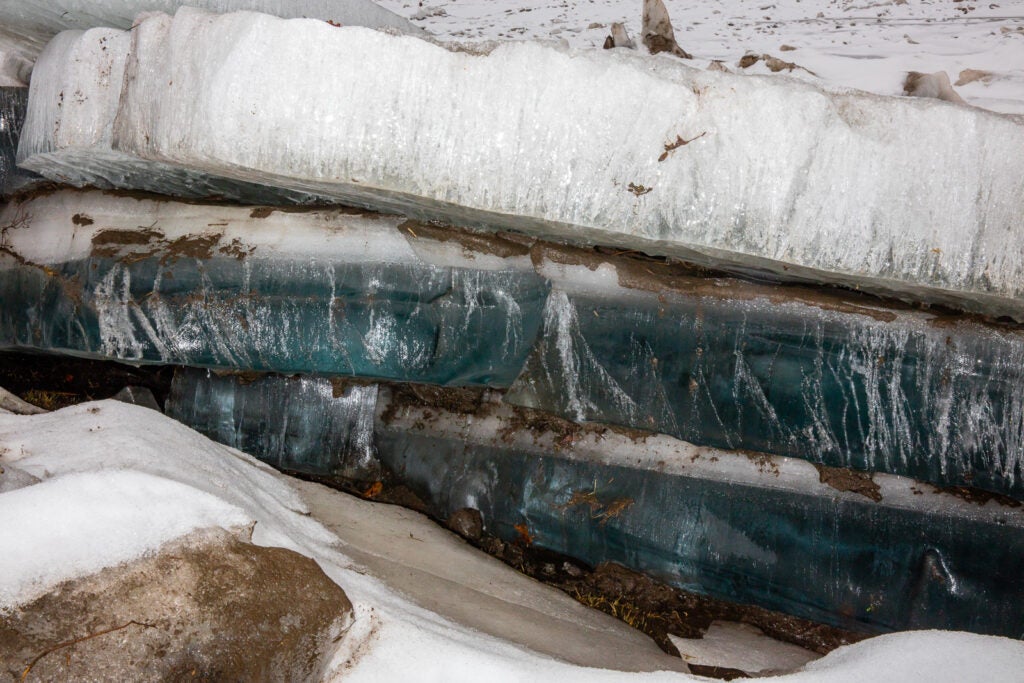 Frozen river ice melts in layers as chunks wash up on shore.

“The Mohawk River is famous for ice jams,” Daly says. “Long, cold winters make thick ice to cover the river. If it warms up gradually, you won’t get an ice jam. It’s rapid rise and flow that causes it.”

The Army Corps of Engineers keeps an Ice Jam Database, which has already tracked hundreds of ice jams in 2018. 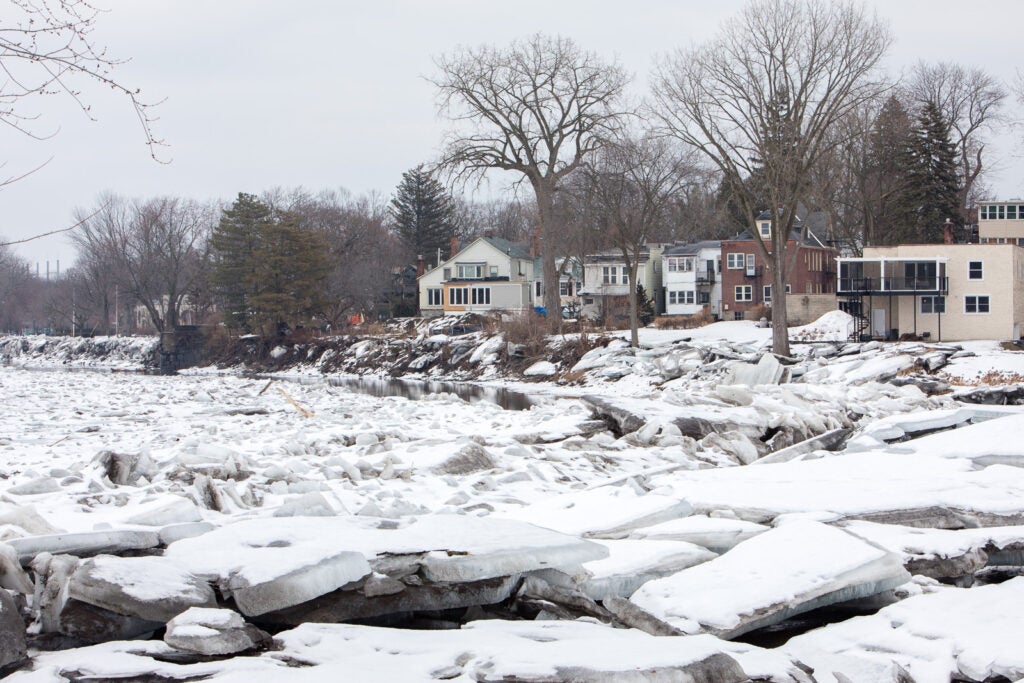 Jams can cause floods, which threaten buildings near the banks.

These icy traffic jams tend to happen in the same places each year because of the structures of the rivers. “Any structure that crosses the channel, like a dam, lock, log boom, or even a bridge with a lot of piers, or a sharp turn in the river can cause a jam,” says Daly.

In the case of the Mohawk, it’s this railroad bridge near the old Schenectady train station that impedes the flow. Beyond the bridge, the water is frozen, but smooth. 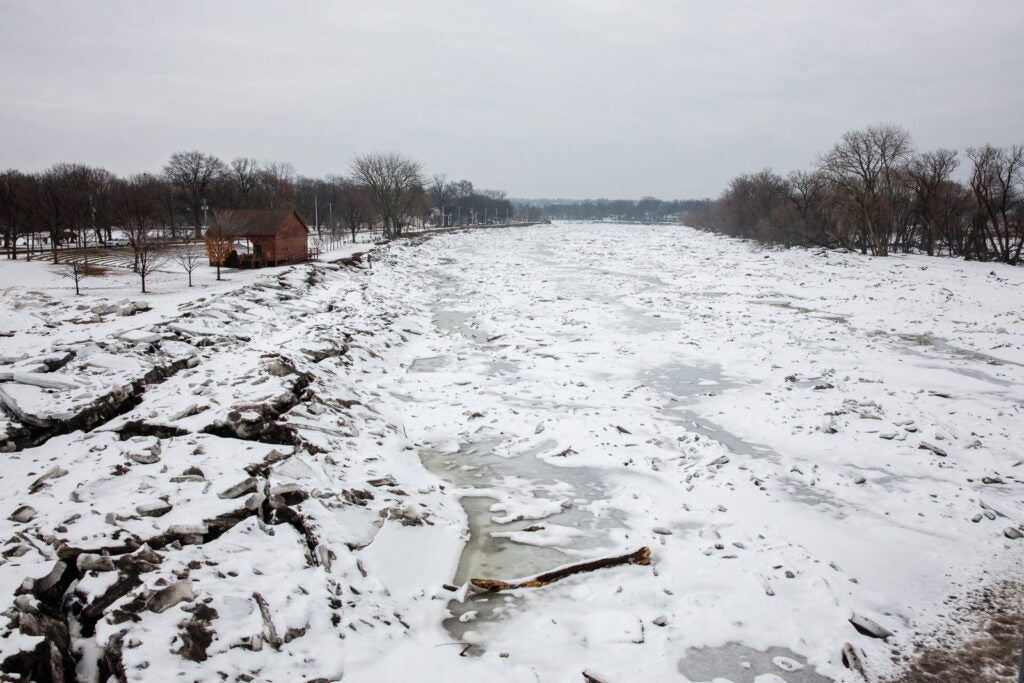 The ice jam in this section of the river goes on stretches beyond the horizon.

Breaking up is hard to do

Once a jam is in place, there’s not a whole lot anyone can really do about it. “We would never send a boat out into a jam like this,” says Daly. “The only thing you can do is try to pick up ice from the shore using equipment.”

It is, however, possible to get ahead of the problem. In 2004, a Department of Environmental Conservation project installed a jam-prevention system in a flood-prone section of the Cazenovia Creek, roughly two miles southwest of Buffalo. The system consists of nine steel-jacketed concrete piers, spaces 17 feet apart. They extend 10 feet out of the water and are five feet in diameter. In essence, they’re big cement pillars designed to control the flow of ice chunks down river to prevent them from piling up and causing floods.

While the project has helped the flooding problem, it didn’t come cheap. The DEP report puts the total cost of construction at $1,828,962.60. So, while these problems may persist in some areas, it takes considerable investment in infrastructure to solve the issue. 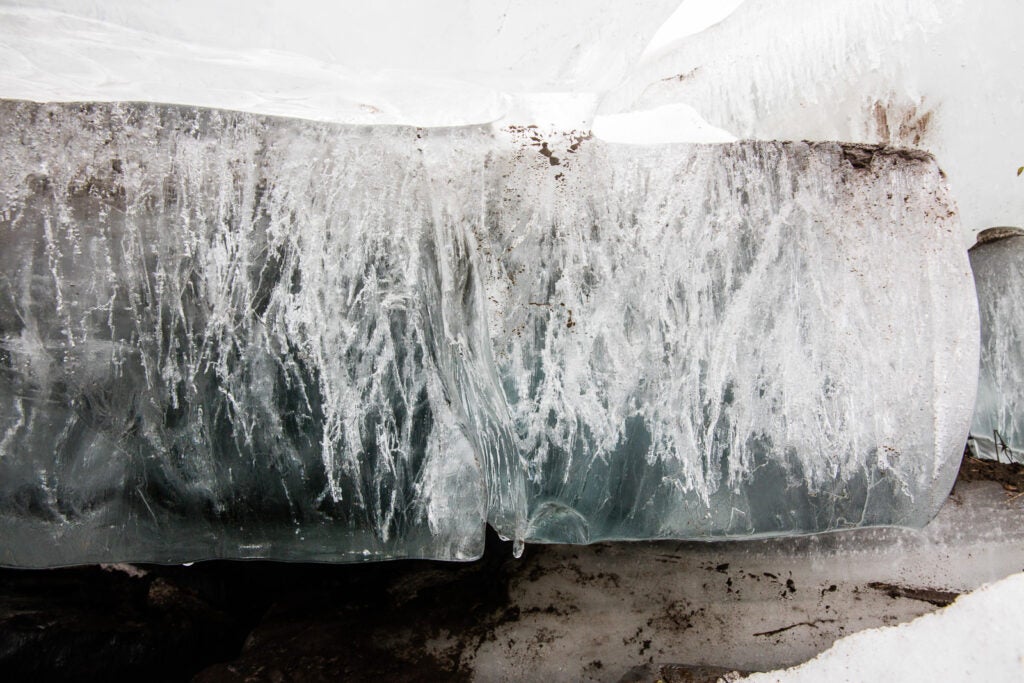 If temperatures continue to fluctuate, we can expect to see more of this phenomenon going forward. And while it’s very cool to look at, Daly says you certainly shouldn’t go walking on it. “It may look solid, but it’s not,” he says. “It’s impossible to get you out.” 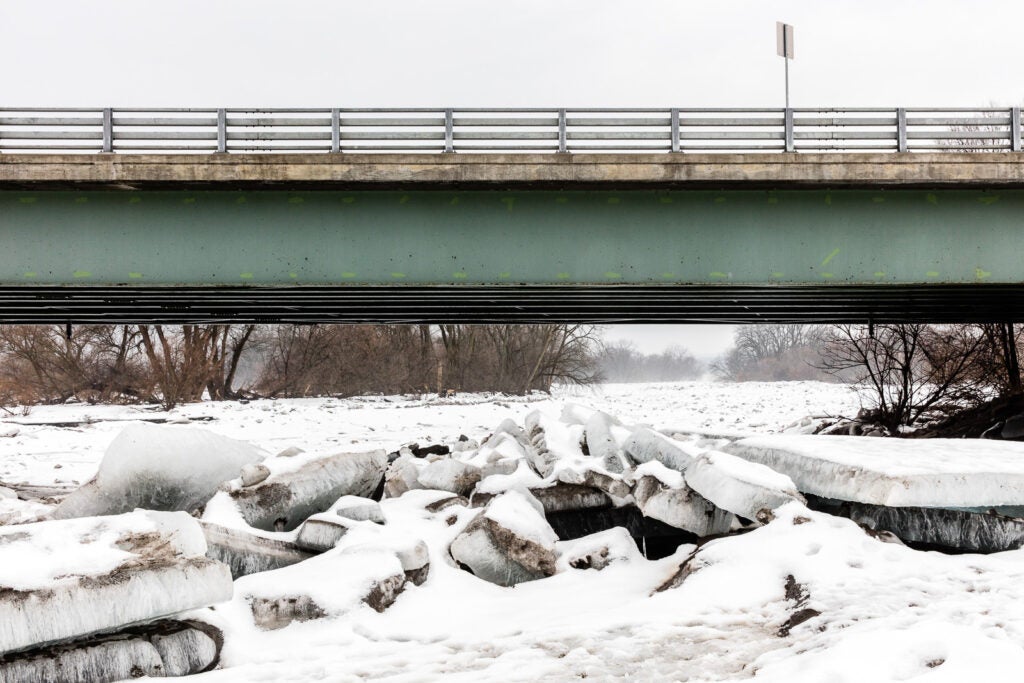 Large chunks of ice climb onto the banks where the river bends.
Stan Horaczek