The nocturnal creatures' social networks are among the most complex in the animal world. 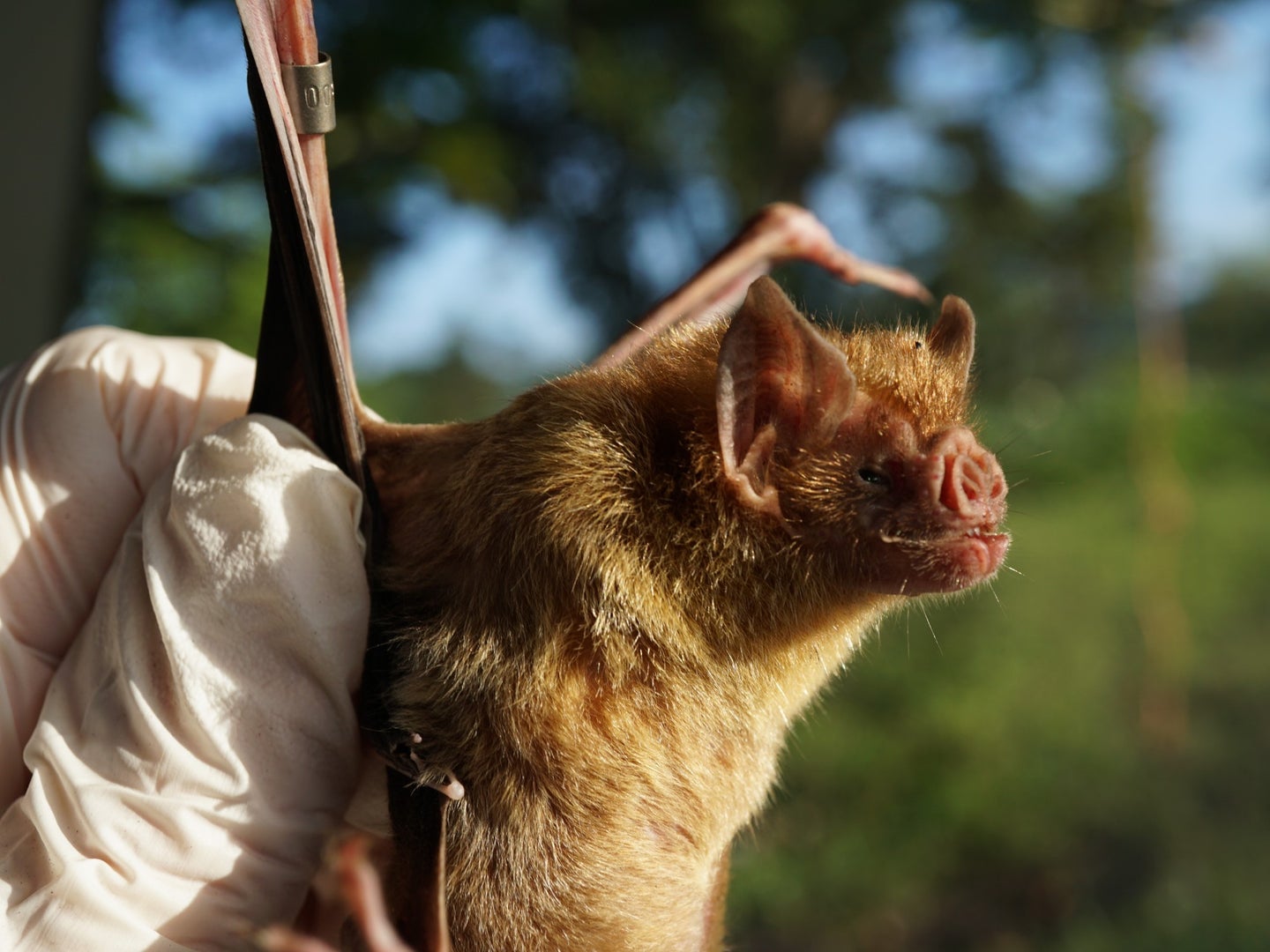 Vampire bats have extremely complex social networks. They live in roosts that can include thousands of mammals. Simon Ripperger
SHARE

COVID-19 has been a stark reminder that when weak muscles, an unforgivable headache, and a sore throat make an appearance, we should cancel all our plans. But it turns out, we’re not the only ones in the animal kingdom that practice this public health measure. Recently published research shows that Vampire bats also isolate from their peers when they feel sick.

The team tracked 31 Vampire bats in the wild, half of which had been injected with a molecule that gave them virus-like symptoms without exposing them to any actual disease. After closely monitoring their behavior using sensors to track the animals’ movement, researchers found that “sick” bats hung out with fewer bats, spent less time near others, and were “less socially connected to more well-connected individuals.” In short, they socially isolated from their community.

“It’s basically the same when we contract the flu, and we feel miserable, and we don’t want to get out of bed,” says Simon Ripperger, leading author of the new study, which was published this week in Behavioral Ecology. “[In that situation] you’re not going to go have a beer with a friend because you just don’t feel like that. This passive social distancing is what we researched here.”

How a host behaves when they are contagious is one of the most important predictors of how quickly an infectious disease can spread. Still, it’s been challenging to answer that question in wild animals—and humans, says Dana Hawley, a biologist at Virginia Tech who didn’t participate in the research. “I found this to be a fantastic and exciting study,” she said in an email to Popular Science.

The study suggests that, at least in bats, the behavior accompanying sickness could have a social meaning. “This study helps to explain why we might feel sick when we are infected with colds and flu,” says Damien Farine, an evolutionary biologist at the University of Zurich in an email to Popular Science. Farine wasn’t involved in the current study. Our behavior when we’re sick “could be a cue for us to stay home and out of people’s way to prevent further spreading,” Farine says.

Biologists have been studying Vampire bats’ social networks for decades; their societies are among the most complex in the animal world. Previous research in labs had shown that when these bats feel sick, they interact less with their peers. Ripperger and the team at the Smithsonian Tropical Research Institute wanted to test those findings in the wild.

So, on April 24, 2018, when the last sun rays fell over Belize’s Lamani Archeological Preserve, the team put mist nets on every possible exit of a hollow tree where a colony of about a hundred Vampire bats nested. They captured 41 females, and ended up including only the 31 that didn’t figure out how to remove their sensors. They injected half of the bats with a water-based salt solution had no effect on their bodies, and the other half with lipopolysaccharide, a harmless substance that tricks the animal’s immune system into believing there’s an infection going on for a couple of hours.

Then, the team installed tiny mini-computer backpacks on each bat, which track the mammals’ trajectories and exchange information with the rest of the sensors. This allowed the team to map out in full detail how much each bat moved, how much time the animals spent with others, and how close they all got to each other. One hour after the bats had been injected and tagged, they went back to the wild.

The team monitored the interactions of the animals for three days. As expected, during the first six hours, the bats with lipopolysaccharide running through their veins moved less than the placebo recipients. During this period, “sick” bats hung out, on average, with four fewer friends than “healthy” ones. Their interactions were also shorter: They spent 25 minutes less than “healthy” bats with each partner. On average, the “healthy” bats had a 49 percent chance of associating with one another, but only a 35 percent chance of being near “sick” ones. Twenty-four hours later, the effects were much less pronounced. Two days later, the previously “sick” bats were interacting at the same rate as the rest of the group.

Figuring out how the behaviors of both sick and healthy animals dictate the emergence of a disease is an open-ended, exciting question, Virginia Tech’s Hawley said. “It seems like the bat that feels sick is essentially withdrawing from interactions, but are healthy bats also avoiding bats that “look” sick?”

For Ripperger, the data recently published can help researchers to understand, and potentially model, the spread of an actual pathogen in a community of bats. “We can run a model with this data with a pathogen that requires body contact in mind, for example,” he says. “We can use the same data set to model the spread of that pathogen because we know how close together the bats were and for how long. This is really fascinating.”

From an evolutionary standpoint, the study also poses the question of how, and why, selection has favored such individual behaviors, as these are unlikely to benefit neither the pathogen (because it reduces its ability to spread) nor the sick individual (because it already has the sickness), says Farine.

“Studying social distancing in non-human animals helps us appreciate that [this practice], which feels very unnatural and hard to us, is very much a natural strategy for social animals,” says Dana Hawley. “That doesn’t necessarily make it any easier, but helps put humans in a broader context.”