How Bats Find Their Way Through The Clutter

Turns out bat sonar is simpler than scientists thought. 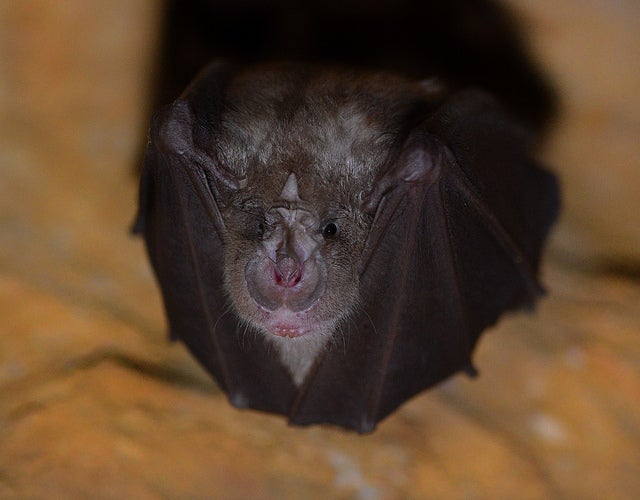 There’s this scene in one of the greatest movies of the 80s, “The Blues Brothers,” that makes me laugh and cringe every time I see it. Jake and Elwood are careening through Chicago, sunglasses on, at 120 MPH, fleeing every representative of Illinois’ law enforcement community. Elwood doesn’t flinch as he dodges every pylon on Lower Wacker Drive, narrowly missing bicyclists, pedestrians and delivery trucks. Surely he’s about to crash in a horrible spectacle, you can’t help but think, even though of course he doesn’t.

This is the image that came to mind when I read a new bat study coming out today. Like ridiculous Elwood, hunting bats effortlessly avoid trees, power lines, and each other, appearing insanely unhinged but in fact behaving very carefully. They do this in total darkness, too. They have sonar, but it turns out the way it works is actually pretty simple, the new study says.

Scientists have assumed bats must use some kind of complex echo interpretation to figure out where they are relative to their prey, relative to each other, and relative to any trees or other obstacles in their paths. But inferring everything from simple ultrasonic echoes is hard, to say the least, and might actually be impossible. Could bats really be sending and receiving that many signals that quickly?

Researchers from the University of Antwerp in Belgium and the University of Bristol in the UK tried to find out. The team used lasers to scan a chunk of forest, and used this information to build three-dimensional models of horseshoe bat habitat. Then they modeled bats flying through two-dimensional and three-dimensional versions of this environment. They came up with an algorithm that can model what the bats are doing — and it’s not complex computation of dozens of point sources simultaneously.

Rather, bats use a simple binaural trick: They compare the loudness of the echoes from each ear, and turn away from the side that gets a louder echo. This requires ultra-sensitive hearing capable of distinguishing minute differences in the time it takes to make an echo. But on the whole, it’s not that hard, and it is pretty intuitive. When it takes less time for a bat’s call to bounce back, that means an object is closer. When it takes a little bit longer, that object is farther away.

In repeated computer simulations, bats following this algorithm steered away from obstacles, demonstrating this simple input is enough.The key distinction here is that the bats don’t necessarily figure out where obstacles are located. They just know where to turn to avoid them — or, based on the echo signature, where to get a meal.

This simpler signal processing allows bats to respond more quickly, turning on a dime at high speeds to snatch moths and mosquitoes while avoiding each other. And that’s good news for researchers building drones and other robots based on bat behavior — programming them might not be nearly as complex as we thought. The work appears in PLOS Computational Biology.