Both bats and humans test out talking as infants

Greater Sac-winged bat pups have their own version of baby talk. 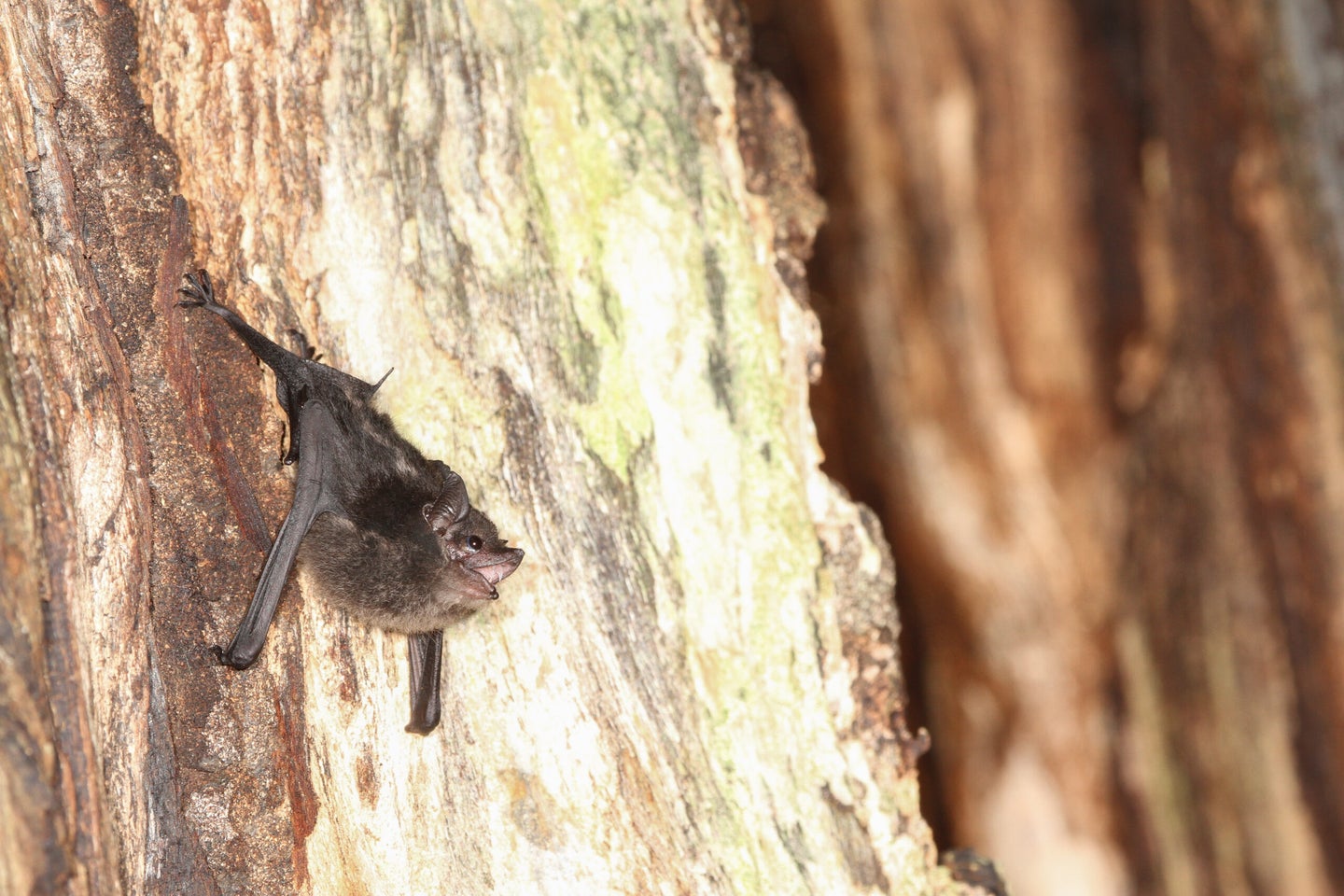 Greater Sac-winged bat pups practice talking to themselves for minutes at a time. Michael Stifter
SHARE

The Greater Sac-winged bat, known for clinging to the sides of buildings and feasting on insects, couldn’t seem more different from a human. However, it turns out we have more in common with these three-inch-long flying mammals than meets the eye.

According to a study published today in Science, Greater Sac-winged pups babble just like human babies. Not only do the black-furred infants burble like us, but they possibly do so for the same reason: to learn how to talk.

In fact, these tiny critters spend about 70 percent of their infancy prattling off nonsense as a way to practice syllable formation, says lead author Ahana Aurora Fernandez, a postdoc at the Leibniz Institute for Evolution and Biodiversity Research in Berlin. By the time their three-month infancy was up, the Central American natives learned an average of 12 to 20 unique syllables—half or most of the 25 syllables adults use to form their squeaks and squeals.

To determine if the pups’ warbling was similar to those of human tots, Fernandez spent every day for four months observing the newborns from sunrise to sunset. She watched 20 itty-bitty bats grow up across two colonies: one in Panama the other in Costa Rica.

Fernandez and her team collected audio recordings of the squealers in addition to their observations. The researchers then analyzed the baby bat songs to see if they met eight universal characteristics of human babbles including early onset, repetition, rhythmicity, universality, and occurrence in non-social settings.

“We came up with this list of eight features after digging into the literature of human infant language acquisition,” says Fernandez. “We read a lot of papers and books, and also talked to many leading researchers in the field to really understand what is going on when human babies go ‘bababa’ or ‘dadada’.”

Turns out baby bats’ burbles met all of Fernandez’s characteristics of human toddler jabbering. The pups’ babbling bouts were repetitive with 77 percent of the syllables uttered were succeeded by the same syllable type. According to Fernandez, bat baby phrases also took on a rhythmic beat just like the endearing ‘papas’ and ‘mamas’ of human infants.

Just like human infants, the chatter of the growing bats did not require a social context. They yammered whether they were hanging alone, cuddling with their mom, or nursing. In fact, they spent 30 percent of their days testing out their vocal cords. The average prattle bout lasted about 7 minutes, with the longest being 43. In comparison, adult bats only speak for a few seconds to a few minutes at a time.

While no individual infant managed to accrue all 25 syllables used by adults, each of the 20 pups learned the 10 syllables from adult males’ territorial and mating songs. This shows that bats don’t babble for no reason—they’re actually learning a language.

But unlike a human baby’s cries or coos,  a pup’s warbling rarely elicited a caretaker’s response. When a human toddler utters ‘mama,’ their mother probably will react. However, during the course of the study, it seemed no amount of yakking induced a similar response in adult bats.

Why we should tune into bat chit chat

Very few mammals are known to chatter throughout their childhood. In fact, only humans and songbirds have been observed warming up their vocal cords during early development, says Fernandez. Therefore, this babbling bat discovery means scientists can now compare how two very different species learn to communicate.

“I was always interested in vocal communication because we as humans are so communicative, right? I mean human language defines human nature. We use language daily to share ideas,” says Fernandez. “So, I really wanted to understand the communicating systems of other animals because I think by learning how they communicate and perceive the world, we can learn about ourselves.”

Fernandez hopes that future studies will conduct neurological work to watch the bats’ brains during toddler twaddle and look for similarities to brain development in human children. In the meantime, she hopes we can all appreciate bats a bit more.

“It was just amazing to have this experience to work with wild animals,” says Fernandez. “When I’m sitting in the middle of the jungle, I feel privileged that [these bats] allow me as a human to just observe their natural behavior. That they’re so accepting of me. It’s amazing.”